China's leisure market continues its strong growth. According to OC&C Strategy Consultants' latest survey, the market is currently standing at USD$479 billion, accounting 11% of China's total consumer expenditure, and the ratio is expected to grow as much as those in the US (21%) and UK market (17%).

Of all the categories, cruise holidays and theme parks had shown high planned growth in spending last year, contributing to 8% and 9% of the leisure market respectively. Domestic travel, sports event and food delivery also saw growth in spending.

Jack Chuang, partner, Greater China, OC&C Strategy Consultants, said the post-80s generation, which are usually more willing to spend time and money to indulge themselves with material possessions and leisure services, will further contribute to the growth of the leisure sector.

Businesses of different sectors should segment their customers to provide tailored offerings, he added.

With several international players joining the field, including Disneyland Shanghai and Fantawild, the Chinese market is now more competitive than ever.

Disneyland Shanghai, which was opened in 2016, saw a total of 11 million visitors in its first year of operations. On the other hand, local operator Fantawild, which is currently the second largest theme parks group domestically, plans to build another 20 theme parks in China and abroad over the next five years.

To stay ahead of the field, Pascal Martin, partner, OC&C Strategy Consultants, encourages theme parks to define their target customers.

"Currently, theme parks focus on catering for families to include child-friendly rides and attractions, making less room available for tailored offerings for thrill-seeking teenagers," he explained.

Young parents, for instance, would look for theme parks that are suitable for family purpose, which children-friendly rides and interaction with cartoon characters will be relevant in this case.

Young excitement seekers, on the other hand, would look for high intensity experiences.

According to Cruise Line International Association, the number of cruise passengers in China has been growing at about 76% YOY for the past four years to reach 2.1 million in 2016. Yet, the number is only representing 0.2% of the total population in China, a significantly lower portion when compared to Australia (5.4%) and the US (3.5%). This indicates potential growth in the industry.

The Chinese market differs from the western market in terms of the target demographics. In the western market, retired and elderly are the most common customer groups for cruises, yet in China a higher portion of customers are at their 20s and 30s.

New customers usually enjoy basic new activities like sightseeing on board on a cruise ship. Returned customers, on the other hand, would start looking for different activities. The cruise operators should cater to the two different groups.

In short, the Chinese sports leisure market would need more venues and facilities.

Chinese customers no longer see eating out as part of the special occasions like business meals or celebratory occasions. Instead, they have started incorporating it into part of their daily life.

In addition, Chinese customers show a stronger tendency to increase consumption of western food such as steak, BBQ, pasta and pizza at generally higher prices than Chinese food, indicating a trend of customers trading up. 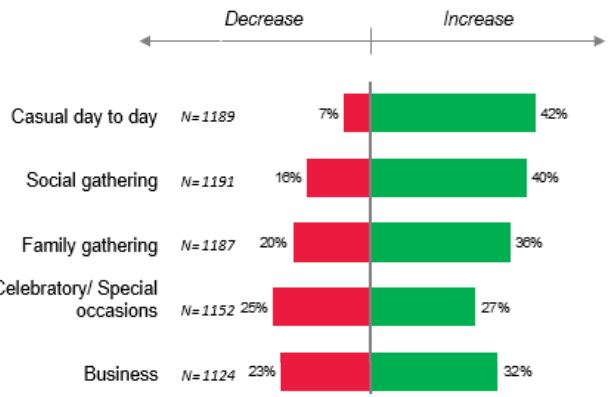