Amidst this paranoia of the coronavirus, one brand that found itself in the middle of the discussion unexpectedly was Mexican beer brand Corona. Numerous reports have emerged around searches for “corona beer virus” surging on Google from 20 January.

According to Digimind’s statistics, mentions of ‘corona beer’ slowly rose from 20 January and peaked nine days later. Over 600,000 mentions were recorded amidst the global virus outbreak period, clearly lending a hand to Corona’s popularity. Some of the top emojis used by netizens during the news around coronavirus include a beer glass, tears of joy emoji, medical mask emoji and face palm emoji, among others. 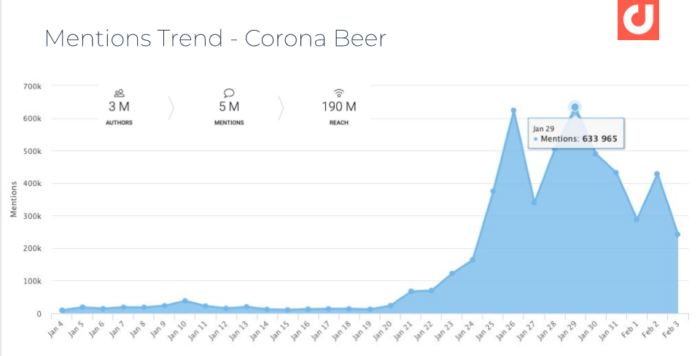 Meanwhile the beer maker Constellation Brands has publicly said that it doesn’t believe consumers will link the virus to the brand despite carrying the same name as the global virus outbreak. But founder of eCommerce and SEO consultancy Stridec, Alva Chew said that a seemingly adverse situation such as this, can be turned into an opportunity for a brand to shine and show the world what it is made of. Chew added that an established and/or mainstream brand should take on the responsibility and duty of trying to advance humanity’s better side.

In the case of the coronavirus, Chew explained that the statement by Corona reveals that the beer brand is missing an opportunity to do public service for the good of the community, and at the same time scoring some publicity brownie points.

“Corona could take this chance when a lot of attention – warranted or not – is shining on them and do some really clever public service announcement campaigns that educates the correct facts about the virus, while at the same time encourage positivity and support of the community and the medical workers,” he said, adding that this will fit into Corona’s “cheerful and upbeat” brand persona.

According to Chew, a case in point that could be highlighted is when Nike sponsored sportsman Colin Kaepernick, who was embroiled in a controversy then. “The brand did not shy away or detach itself from it, and instead took a stand with a well-executed campaign and won over fans, not to mention the US$6 billion increase in overall value it experienced since the campaign,” he said.

There’s still time for Corona beer to capitalise on the attention and use it to their advantage.

Meanwhile, Reuben Liu, assistant group head, creative, SearchGuru shared a different point of view, and lauded Corona for doing the right thing. “It’s a sensitive topic since we’re talking about a potential global pandemic here, and Corona beer has done the right thing by playing it safe – acknowledging the unfortunate name coincidence and hoping that the large majority of humanity is smart enough to know the difference,” he added.

However, Liu said Corona could potentially ride on the free publicity and aid in eradicating the spread of the virus, either through funding research into a potential vaccine or distributing care kits to the public. “Nothing too brand heavy, maybe a Corona versus coronavirus campaign if you will,” he added. He was quick to add that Corona should not attempt at a funny take on the situation or face a backfire. “While Corona cannot stop the memes from emerging, it shouldn’t add to it. It is a serious issue and any brand trying to be funny in a situation such as this will run a very high chance of major backfire,” he said.

Rosalind Tan, chief executive officer, PurpleClick Media, also said that it would not be appropriate for Corona to leverage on the situation, given deaths are involved.

Sometimes when it comes to bad press, ‘Silence is Golden’, unless it starts to impact the company’s sales negatively.

“When you conduct a search on the word ‘Corona’, you will see a lot of reputable sites publishing articles disassociating Corona beer with the coronavirus. Corona would have to spend tens of thousands of dollars in order to be on the front page ranking of Google Searches. All in all, I do think Corona is doing a great job considering everything that is going on now,” he added.

On the matter of threading carefully in this sensitive situation, a bar in New Zealand was slammed by netizens for promoting Corona beer accompanied by a tagline “while the pandemic lasts”. Several media outlets reported that the ad featured two men clad in boiler suits (coveralls) and masks while holding a bottle of Corona beer.

The coronavirus is taking a toll on transport and tourism sectors worldwide, especially to many in Asia. Singapore Tourism Board and the Singapore government expect a knock-on impact on related industries and firms, as well as tourism numbers. Meanwhile, in the aviation industry, Singapore Airlines has reduced capacity for some of its routes to mainland China while Vietjet suspended all flights to and from mainland China. AirAsia and Malindo Air cancelled all flights bound to and from Wuhan. Malaysia Airlines is currently allowing cancellations with full refunds and free ticket alterations on flights to and from mainland China.