Subway has unveiled an unusual, low-budget-looking ad to promote its new Meat Stack sub and mint chocolate chip cookie. The 15-second long ad starts off with a warning that says "advertisement made by intern on budget". It then showed the process of creating the ad with a platform that looks similar to Microsoft PowerPoint, while using basic creative tools.

The post is accompanied with the caption: "We're keeping this brief. The all new Meat Stack sub is here! Get yours at your nearest Subway restaurant now." It also added that Subway did not pay for a copywriter, along with a hashtag #LessMarketing4MoreMeat. The post has garnered 90 likes with 12 comments and 22 shares at the time of writing. Netizens showed positive sentiments to the ad, saying they love it. One Facebook account by the name of "All SGpromo" even offered to be Subway's copywriter for free, providing a link to an article it has written about Subway's latest Meat Stack Sub.

Meanwhile, Subway created a similar post for its Facebook page in Malaysia. The post featured two pictures that said "We're sorry the new Meat Stack ads won't be a feast for your eyes", and "Having used up all our money for more meat in the Meat Stack, we are left with no budget for marketing". It is also accompanied with the caption revealing that Subway had to make a choice with its budget. It could either have "fresh meat for a hyper-value sub but poor marketing, or just a typical sub with professionals dictating [its] ads". "Our choice was simple," the post went on to say. Subway Malaysia also used tongue-in-cheek hashtags such as "#ImNotPaidEnoughForThis" and "#NoMoneyForHashtag".

Subway's post in Malaysia also garnered positive reactions, with 206 likes, laughs, and loves, as well as 47 shares. The creative agency behind the campaign in both markets is VaynerMedia APAC. 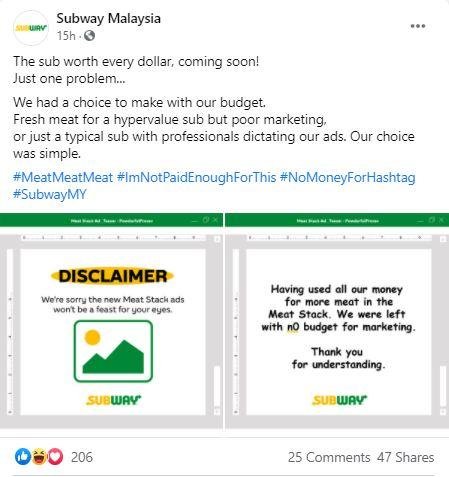 In a statement to Marketing, VJ Anand, executive creative director for VaynerMedia APAC, said the campaign was inspired by the real problem in the advertising industry, where budgets have been cut for brands and agencies all year round. He added that the team at VaynerMedia APAC saw that the Subway Meat Stack had a lot of value and meat, and thought it would be an interesting angle to ride on: that Subway had put so much meat in the sub that they ran out of marketing budget.

As for the art direction, Anand said he wanted it to be "super lo-fi" (a term for music where imperfections are deliberate shown), and look as if the campaign was done on a non-creative tool such as a presentation software.

We joke in the marketing industry often about how we could actually do ads using Microsoft Word or PowerPoint documents, or even using Paint and Comics Sans as fonts. We took all those jokes and made it a reality.

"It is fun stuff but yet really there’s a reason for it with a product like the Subway Meat Stack," Anand added.

The campaign also aims to be "real". The idea that budget cuts the real value of the product and how the team always makes fun of no-budget ads come together so well that it makes the campaign fresh and fun. "Beyond the advertising industry, audience on social has also been applauding the effort and the idea. I’m happy that it gives our partners at Subway some fun and positive buzz on social media," Anand said, adding that the team at VaynerMedia APAC aims to give every brand partner some buzz and some connection to the audience of today by tapping into relevant insights.

"We’re happy that within 24 hours we’re already getting so much traction with our first campaign with Subway. We’re also happy that during these tough times, we have partners such as Subway that have complete trust in the VaynerMedia APAC team to come up with content and campaigns that resonate with their audiences. We really want to make an impact to their businesses using our insights, strategy, knowledge of platforms and our left-field creative thinking," he added.

Join us on week-long journey at PR Asia 2020 as we delve into topics such as diversity, cancel culture, future of PR, PR with a purpose and many others from 8 to 11 December. Sign up here!