With the pandemic persisting for about two years, SMBs in Hong Kong have been pushed out of their comfort zones to find new ways to keep their businesses running. This has propelled the growth of digital in Hong Kong. In a recent study conducted by PayPal Hong Kong, about 90% of SMBs in the city now had a digital presence, using their own digital channels to engage customers. The study "PayPal Hong Kong SMB Survey 2021: Hong Kong’s SMBs embrace digitalisation to thrive" was conducted between September to October 2021 to study the impact of COVID-19 on Hong Kong’s SMBs, their responses and post-COVID-19 plans.

Amid the pandemic, 50% of respondents said their business were negatively impacted. Among these respondents, 58% reported a decrease in demand; 46% struggled with a loss of offline customers, and 40% had supply chain issues.

However, on the other hand, 30% of surveyed respondents claimed that their business did not have negative impact at all. 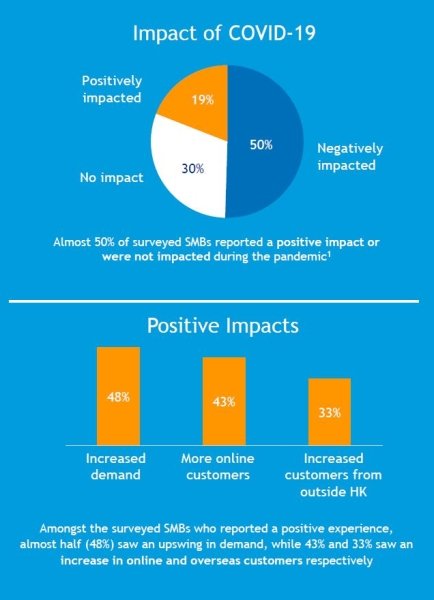 In response to the pandemic, 87% of the surveyed SMBs were already using their own digital channels such as social media, owned eCommerce websites and company-owned platforms, to promote or sell. Of these SMBs, 48% planned to expand their online presence on these platforms.

Among all online selling channels, social media was most adopted by Hong Kong’s SMBs where 70% of respondents were using or planning to utilise it for selling and promotion. This is followed by owned eCommerce websites (64%), company owned platforms (60%) and third party eCommerce platforms (43%). The study also reported that 91% of the surveyed SMBs agreed that they had witnessed a change in consumer behaviour online. Paypal Hong Kong said although in-person shopping has always been a source of entertainment and a way to socialise for local people in Hong Kong, the pandemic has forced them to go online more often.

According to the study, there were three major shifts that the surveyed SMBs had observed from their online sales patterns, which were the number of local customers (58%), customer spending (51%) and customer age group (35%). Speaking of age groups, among the respondents who witnessed a shift in customer age groups, 73% claimed to have attracted a younger demographic of online shoppers throughout the pandemic. Of the respondents who had witnessed a change in their local customer base, 66% reported an increase in local customers. Meanwhile, over half (54%) of the surveyed SMBs who saw a shift in customer expenditure reported an upswing in spending from their existing customer base.

Paypal Hong Kong said this suggested that many SMBs were benefitting from local online shopping even when the city was locked down during the pandemic. The study has also uncovered the trend that consumers were more open to using digital payment with 45% of the SMBs experienced a core shift in consumer behaviour in the form of greater consumer receptiveness to digital payment options. Of this, 31% cited a greater consumer reliance on online payment, while 26% claimed that shoppers were more willing to make larger monetary transactions online.

Additionally, 86% of respondents said they were eager to implement suitable digital payment options for a variety of different reasons: to attract new customers (67%), to improve customer experience (56%), and to increase online sales (54%). Lastly, PayPal Hong Kong suggested that as social media is crucial to business growth, so SMBs need to consider establishing a presence on social media if they hope to expand business. Also, SMBs are advised to go digital and they need to consider which platform works best for their business.