If there’s any question that a huge following and likes on social media do not equate social media influence, it’s clearly answered by Prime Minister Najib Razak’s social media assets.

Najib  has the largest social media following on Facebook of all the Malaysian politicians, but it looks like the strategy is earning him more abuse than love. In an earlier article, the prime minister reported feeling depressed by online media.

“I am depressed, politicians are depressed because we are easy targets. The print media loses out on circulation and we lose out on votes,” he was quoted saying on The Malay Mail Online.

Following basic principles of engagement on Facebook marketing, Najib’s page shows positive posts, with him commenting on daily affairs. For example, his latest post talks about how a Palestine visitor compliments the harmony in Malaysia:

The post had more than 3,300 comments, most of which were negative. Users even posted the article WSJ published alleging that Najib channeled 1MDB funds into his own accounts (of which the latter is mulling legal action over).

The post pulled in more than 13,000 likes, but had more than 4,000 comments which were also largely negative.

Rainbow Cheung, strategic account manager, JAPAC of Socialbakers, said that fan base and likes are only the first level of metrics one can analyse, but there are a deeper level of metrics available.

On the other hand, Dr Mahathir may be behind Najib Razak with followers on Twitter. Dr Mahathir’s interactions per 1,000 fans on Twitter is almost 5 times of Najib Razak’s (253.06 vs 50.98) over the last 90 days,” said Cheung.

Cheung said that Socialbakers’ Paid Post Detection tool, showed both politicians had paid to promote their posts on Facebook. “So it’s important to know if their influence is organic or paid,” said Cheung. 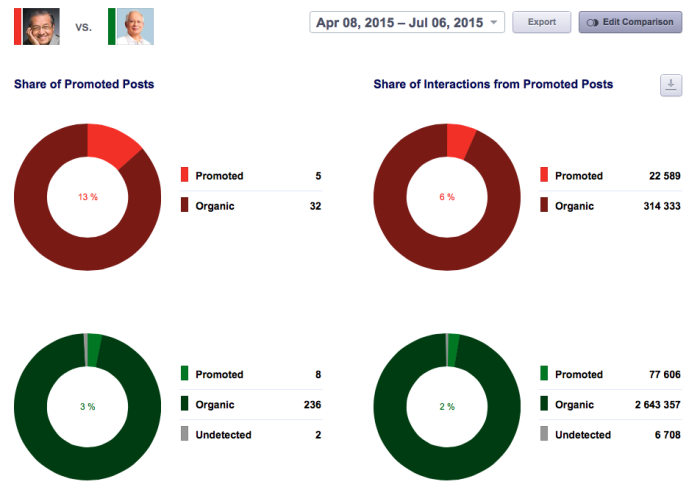 Warren Tan, founder of digital firm VLT said that users will also like or follow a page for negative sentiments, so a huge following can be an inaccurate measure of social media success. "His PR team likely set it up for a good reason, but if you're a politician on social media, you have to be prepared to be transparent. This goes the same for any leader on social media."

In an earlier article by A+M, in a spat by Singaporean banks over the number of likes and followers on social media accounts, experts warned against looking at such "vanity metrics."

“At the end of the day, these metrics are largely meaningless. While response times to customer enquiries are critical to brand reputation, it’s the quality of the engagements and interactions with consumers that count most and add value to the organisation,” said Don Anderson of We Are Social.