Singaporeans proudest to work for local and digital brands

For the second year running, Singapore Airlines is the top brand that Singaporeans would be proudest to work for, new rankings from YouGov BrandIndex reveal.  With a score of 62.5, it leads way ahead of Changi Airport (45) in the second place. Other than the two local brands, digital brands dominate the top ten.

According to the press release, the brands’ reputations were measured by finding out whether people would be happy to be employed by it over the past year. 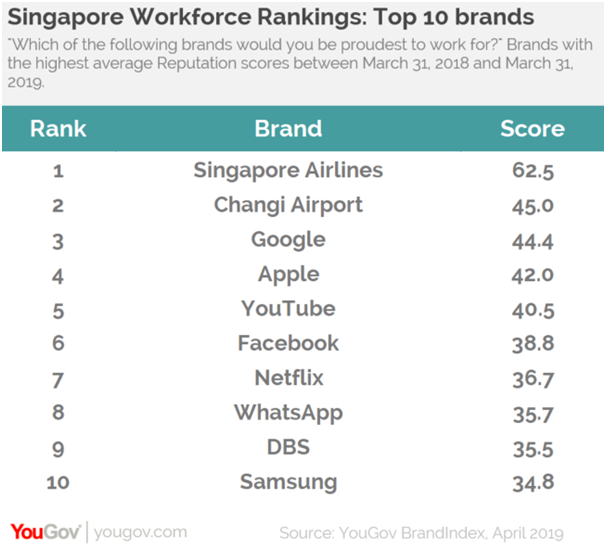 [Celebrate and reward your star employees and teams at the inaugural Marketing Talent Awards 2019, and attract new talent. Entry submissions close on 10 May—start your entries now!]

The rankings also reveal the brands have seen the biggest increase in their scores over the past 12 months. Transport provider MRT heads the list with its score increasing by 20.9 points over the past twelve months. It is followed by Netflix in second (+6.5) and Chinese electronics manufacturer Huawei in third (+6.1).

Ervin Ha, head of data products at YouGov APAC said, “After a year of recovery, MRT has also bolstered its credentials as a place where people would want to be employed – as the brand that has seen the greatest improvement in the number of people wanting to work for it.” 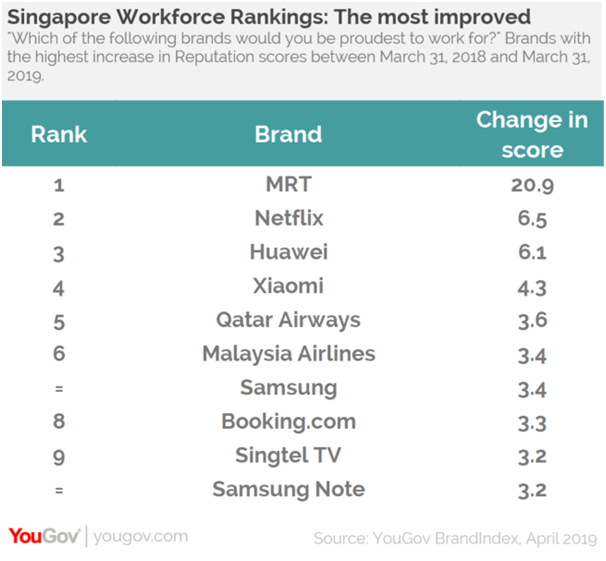 Singapore Airlines also recently topped YouGov’s annual BrandIndex Buzz rankings for Singapore. It measures the public’s perception of brands on a daily basis across a range of measures. The annual rankings are compiled using Buzz scores from across all 52 weeks of last year. Buzz scores measure whether people have heard anything good or bad about a brand during the previous two weeks.

In a report released by YouGov to commemorate the International Women’s Day, Singapore Airlines also left the most positive impression on women.

Is advertising on a suicide mission to wipe itself out?

Brands Malaysians are most proud to work for

One has to simply look at the advertising agency scene to see the rise of female bosses...

Lucky Me, Nescafe, and Surf: the most chosen brands in Philippines

Lucky Me continues to be the most chosen brand in the Philippines for the 3rd straight year.  According to Brand Footprint, Kantar..

Singtel, StarHub, SIA are the most socially devoted brands in SG

A survey by SocialBakers has listed these as the most responsive brands in Singapore...

The branding assignment will currently extend across Indonesia, and Vietnam, with the opportunity to expand into China, Hong Kong,..

Hours after the mainland’s largest online retail platform cuts ties with WeChat due to malpractice, it tailors a special access ch..