Gillette has found itself in a hairy situation as it receives mixed reaction from the public for promoting negative tweets about a much smaller competitor, Dollar Shave Club.

The response on social media has been mixed with some finding the move funny and others finding it mean. 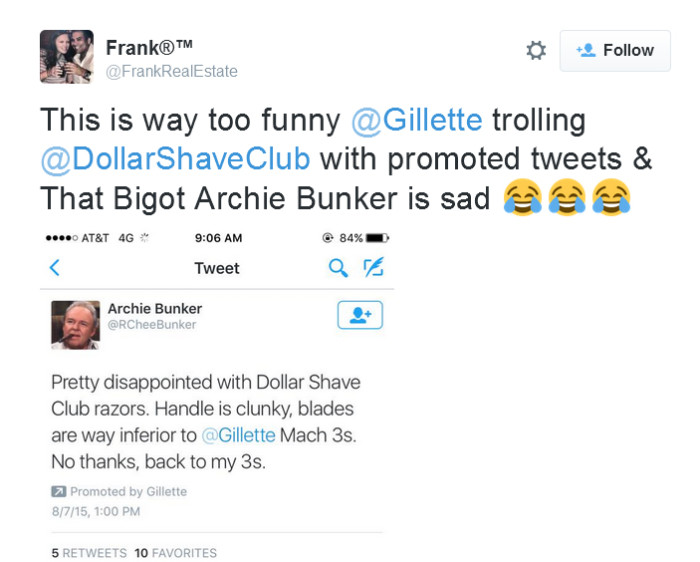 im never buying a @Gillette product again after seeing them pay to promote tweets trolling their competitors like @DollarShaveClub.

Marketing has reached out to P&G for a statement verifying the situation.

Nonetheless, it brings to light the question - how aggressive big brands should be on social media?

More often than not, the bigger players are sitting ducks in the world of advertising - simply waiting to be shot at. One classic example is of the relationship between McDonald's and Burger King. The latter has taken jabs at McD's numerous times, including when the company was going through a massive transition with its last CEO Don Thompson leaving the company. (Read also: BK hits McDonald's with snarky burger ad)

The examples of smaller guys bullying the bigger brands are countless. Think back to the marketing stunts Samsung pulled riding on Apple’s products. Or Pepsi versus Coke.

So with P&G's Gillette now retaliating, does this now indicate a change in tide? Should the big boys learn to finally stand up for themselves and fire before they get shot at? (Read also: When does being brash in your marketing stunt work?)

In an earlier conversation with Marketing, several social media players discouraged bigger brands trolling on social media as consumers are generally in the favour of rooting for an underdog. If bigger brands were to initiate trolls or aggression, it would be a form of an acknowledgment that the challenger brand was a threat or of an equal playing field.

However Tuomas Peltoniemi, president of TBWA’s Digital Arts Network (DAN) was of the view that there isn't anything intrinsically wrong with bigger brands taking on this aggressive approach and trying to be disruptive on social media - as long as they stay true to their brand and have a creative concept behind it.

Generally, challenger brands do have a right to be more aggressive than brand leader in their marketing as they work with smaller marketing budgets, he said.  In this case however, Peltoniemi was not in favour of the move of promoting negative posts on social media given that there is a huge risk for a negative response from the audience.

He added that a small tweak could lead to better results and reduce the risk factor. For example, the brand could promote positive tweets about Gillette, rather than attacking competitors using promoted tweets of negative competitor comments.

Prantik Mazumdar, managing partner of Happy Marketer was of the view that banter between brands, as long as it is not disrespectful and abusive, is a good one. While it can make for good entertainment, brands still must bear consumer psychology in mind before rolling out their trolling tactics.

"It may be in the larger brand's interest to be the supportive and encouraging "big brother" role rather than trolling the smaller brand aggressively," Mazumdar added. This is all the more the case if the magnitude of difference in a brand's size is very big - such as in the case of Gillette and Dollar Shave Club.

"Such aggressive tactics will only create some negative PR for Gillette and I doubt it would make a marked difference in their revenues. There is no good reason for them to troll Dollar Shaving Club for some cheap thrills. That time, effort and budget is better spent doing something more constructive and positive on social,"Mazumdar said.

With that being said, I think kudos to Gillette for at least trying to be disruptive but better luck next time!