Lazada has been going all out with its birthday bash. Seizing the opportunity to jump on the hype was none other than challenger Shopee. In a Facebook post, Shopee poked fun at Lazada’s headline star for the bash Dua Lipa saying that while the international celebrity “makes you scream”, dua lipas (which means two cockroaches in Malay) can “make you scream louder”.

Posted with a humorous attempt at a pun, the joke however fell flat. Shopee ended up garnering the criticism of netizens who deemed the move as not “professional” and not the “right way to do marketing”. This then led to Shopee quickly apologising to users for its light-hearted pun going out-of-hand.

“We hear your disappointment and that was certainly not our intent. We would like to extend our heartfelt apologies and we are determined to monitor and produce the best content to serve you better moving forward. Thank you once again for your kind understanding and support,” the post said.

In a statement to A+M, a Shopee spokesperson said that in listening to the community, the team realised that what was intended as a light-hearted social media post may have missed the mark. “We have removed the post, and we apologise for any offence caused. We celebrate all those who are working to provide an enjoyable eCommerce experience for shoppers in our region,” the spokesperson added. 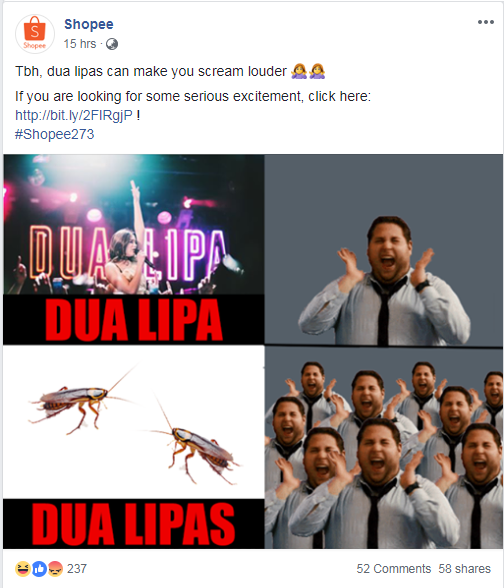 Speaking to┬ĀA+M, a Lazada spokesperson said that it is pleased to share its seventh birthday bash and Super Party with the consumers in Southeast Asia last night. Saying its the first to bring the concept of shoppertainment to this region, Lazada aims to continue to innovate on that front.

“The phenomenal response we received last night from our celebrities, hosts, fans and brand partners, sellers was just overwhelmingly positive. We want to thank all our customers and everyone who tuned in to our Super Party,” the spokesperson added.

This is not the first time Shopee took a jab at Lazada. Last month, during Valentine’s Day, Shopee Malaysia took a cheeky swipe at Lazada Malaysia with its ValentineŌĆÖs Day which was somewhat similar to LazadaŌĆÖs ŌĆ£SlashŌĆØ the┬ĀLeng Chai┬ĀLunar New Year video released earlier this year. LazadaŌĆÖs ŌĆ£SlashŌĆØ the┬ĀLeng Chai┬Ācampaign offered consumers the opportunity to rent a boyfriend┬Āand spend time with┬Āsenior citizens at a nursing home for a reunion luncheon.

Meanwhile, Lazada has not held back on its “Super Party” promotions which was held last night in Jakarta. The event was live-streamed on its app for consumers in┬ĀIndonesia,┬ĀMalaysia, Philippines,┬ĀSingapore,┬ĀThailand┬Āand┬ĀVietnam. Through this concert experience across Southeast Asia, Lazada said in an earlier statement that it is looking to blend shopping and entertainment, ushering an era of ŌĆśshoppertainmentŌĆÖ.

Initiative MD Kristine Ong: 'Always hire people who are smarter than you'

She will also be the creative lead for the APAC GSK business and report to Vishnu Mohan, CEO of Havas Group, Southeast Asia and In..

This will see the Singapore-based retailer working to rebuild its e-commerce business. ..

Is it really more fun in the Philippines?

The Department of Tourism has been copping flak for its latest campaign tagline, 'It's more fun in the Philippines.', similar to a..

Finally we can enjoy Starbucks' beverages in Hong Kong Disneyland and buy featured merchandise in the park...

The role is a newly created one. More here...