The Singapore Civil Defence Force has released a TikTok-inspired video showing a group of servicemen casually chit-chatting before suddenly breaking into a run, changing out of civillian clothes and gearing up for what is presumably an emergency call. The 15-second video on its Facebook page has gotten positive reviews from netizens and garnered over 1,000 reactions and shares respectively within a week.

The video concept is popular on TikTok, a China-based app known for creating short-form videos on loop. The trending videos showcase the side of uniformed professionals outside of work, ranging from soldiers to performers and nurses.

Posted by Singapore Civil Defence Force on Thursday, 16 May 2019

The light-hearted video was captioned “Rolling into the weekend be like… #TGIF!” and featured a cast from the Tuas View Fire Station, said the post.

One commenter approved of the Singapore flag flying in the background, to which SCDF sportingly replied with a meme sharing that it agrees. Meanwhile, others caught on to the fact that the organisation has jumped on the TikTok trend and commented that the team looks cool in action. 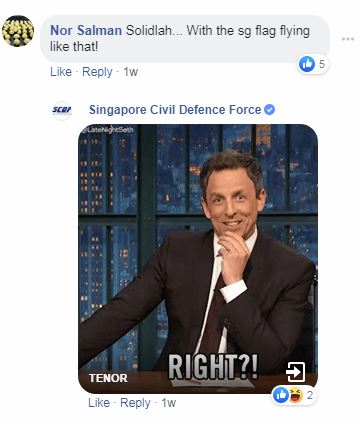 This is not the first time SCDF has added a sense of humour into its social media platforms. In 2014, it posted an exchange with SGAG after following the popular troll site on its Twitter account. SGAG has tweeted: ‘The @SCDF just followed SGAG on Twitter. Well, umm, thank you? I’ll call u when my cat gets stuck on the tree?’

Meanwhile, other government bodies such as Singapore Police Force have also been changing up its language to resonate with its audience on social media. Last October, Singapore Police Force spread awareness about popular Korean boy band BTS’ tour tickets scams circulating online by wittily sliding in titles of some of BTS’ hit songs, such as “Idol”, “Dope”, “Blood, Sweat & Tears”, “Not Today” into its Facebook post.

In line with Chinese New Year celebrations in February 2018, the Singapore Police Force also discouraged shop theft with some puns on social media. It uploaded an image on its Facebook page of a cop chasing after a thief who took a can of abalone with the caption “Stealing abalone? You’ll end ab-alone in prison.”

Topshop shutters US stores after parent company files for bankruptcy

The Caltex team took a total of 24 hours to reach its destination in Jurong, baffling bystanders from the East to the West. ..

Café de Coral has kicked off a food waste reduction campaign with local rap and hip hop group FAMA to draw awareness to the food w..

TM reaches out to French residents

TM has introduced FRANCE 24 news channel, available on HyppTV, to reach out to the Francophone community in Malaysia...

Dream Cruises invites travellers to dream with the mermaid

The company has launched a new branding campaign with the theme of "The Mermaid’s Dream."..