The zombie-themed Run For Your Lives Hong Kong obstacle course and music festival, scheduled for 2 October at the West Kowloon Cultural District, is heading for a showdown with Facebook users.

The event's Facebook page has been bombarded by a string of comments asking the organisers, the Singapore-based sports entertainment agency Action X, to postpone the event due to the Occupy Central protests.

But organisers have yet to address concerns about the event from Facebook users and instead opted to post oddly timed messages and competition incentives from sponsors.

A Facebook post by the organisers counting down three days to the event received 155 comments, many of which said it was bad timing and asked for the event to be postponed.

Facebook user Kyros Ho yesterday responded with a photograph of riot police in gas masks at the Occupy Central protests on Sunday with the oneliner: "The zombies invaded yesterday." 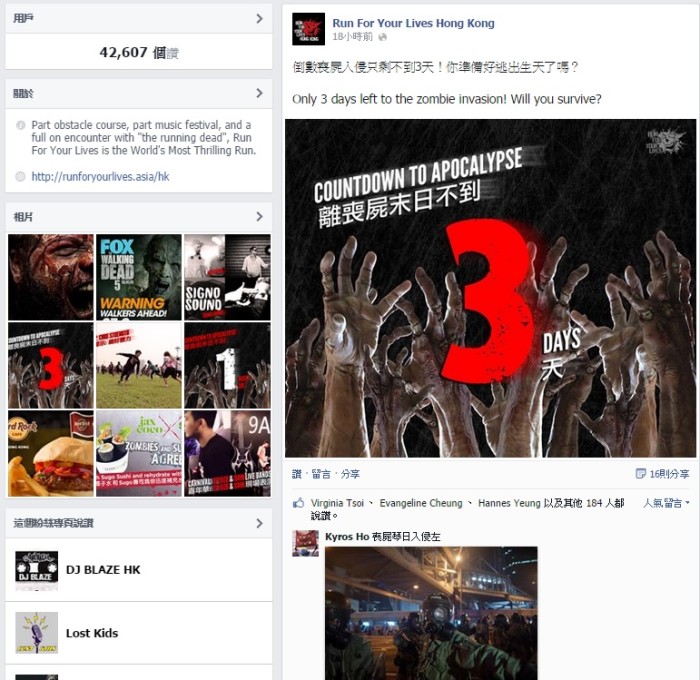 Commenting on the same post, Facebook user Ming Wong said "If the National Day fireworks can be canceled due to the Occupy Central protests, then why not postpone the event?"

Another post that garnered a plethora of comments was part of a Facebook Q&A contest sponsored by Microsoft, the organisers have asked users to submit a 150-word English or 100-character Chinese submission about how they would use the technology giant's Surface Pro 3 to help it escape from zombies.

The winners with the most creative, humorous and ingenuous submission received by 5 October would get a chance to win the tablet.

The post with the rules of the Q&A contest received over 40 comments, many of which again asked the organisers to postpone the event.

Meanwhile, Facebook user Katie Ling replied, "We are running for our lives already."

An open letter was posted as a comment to the social media contest post by Facebook user Chi Wai who said the reasons for requesting the postponement of the event was because Hongkongers are not in the mood to join the event, they have a more terrible enemy to escape from apart from zombies and that the atmosphere is too "sensitive" for holding a fun event.

On the other hand, Facebook user Ted Lam argued, "The registration period is already all done. Just three days before the event, it's bad enough to tell the organisers that it's 'bad timing' and now you are asking them to go back to square one?"

Other Facebook users spoke with the voice of reason and questioned the ability of the organisers to forsee or to deal with the situation from a business standpoint.

Facebook user Yu Tik commented on the countdown post with: "The dates of Occupy Central have been set early on.  Why didn't they consider that carefully before setting the date for the event and only think of postponing it now?"

To which user Terrance Kwok responded: "Sorry, I am a Hongkonger but I really did not know that Occupy Central was set in stone."

Meanwhile, commenting on the Q&A contest post, Facebook user David Ko, also co-founder and managing director of PR agency Daylight Partnership, said, "I am not one of the organisers but I am guessing that a lot of money has already been paid, such as to rent the venue and for setting it up so postponing will definitely be impossible. Or if it is postponed, there will be no refund."

"Why not let those who want to run, participate, and those who want to Occupy Central to continue occupying?  Everyone has the freedom to do as they see fit and this is exactly the kind of social rights that we want to defend for Hong Kong."

Daylight Partnership is a sponsorship partner for the Run For Your Lives Hong Kong event.

An Action X representative told Marketing that the organisers have not yet responded to requests to postpone the event on Facebook because they are still in negotiations with the owner of the venue, the West Kowloon Cultural District Authority.

"We understand Hongkongers' feelings for Occupy Central and we support Hongkongers standing up for what they believe in," the representative said.

"We have the intention to postpone the event and are exploring the opportunity to postpone it. However, it is a venue-specific event and we are still talking to West Kowloon about what we can do and to push for postponing it."

But she adds that the organisers cannot cancel the event.

"We definitely can't cancel the event because so much effort has been put into it and we hope participants can understand that."