This is not Manulife’s first foray into retirement. In fact, the brand is ranked as the second largest retirement provider in Singapore with our strong product – RetireReady – which was launched in 2016.

Along the way, competitors started matching and improving their features, and we started to see sales fall away, especially among Millennials.

The revamped RetireReady Plus was the perfect opportunity to make a splash in the market and start to recapture the Millennial market again. 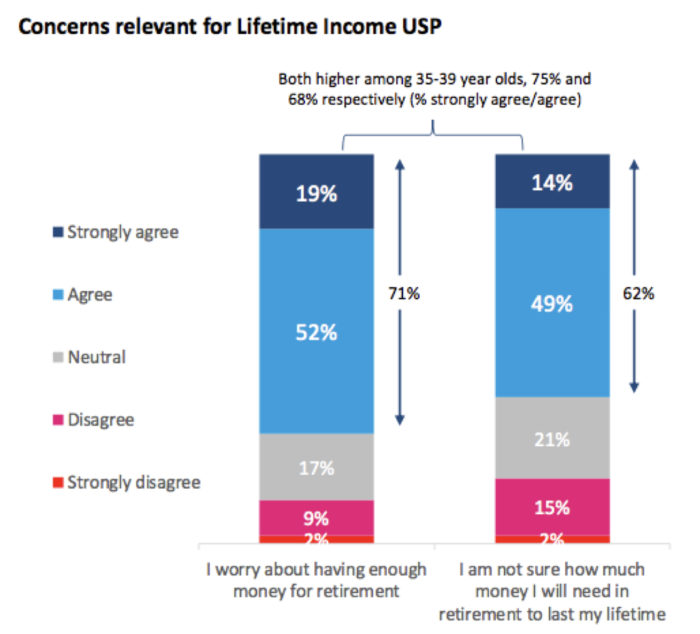 “Almost two thirds of Singaporeans fear they’ll not be able to stretch their retirement dollar.”

“A majority are concerned about their financial future.”

We conducted a study with Millennials in 2018 and found that the majority were concerned about their financial future. Yet only one in four have a retirement pension plan in place.

We had a distinct gap between intent and action

The average Millennial wants to have more retirement money, yet wishes to retire #LikeABoss.

Their ideal retirement age is 57, as compared to 60 for Gen X and 65 for Baby Boomers.

We needed to convince them that if they wanted to retire like a boss, in a country with the world’s third highest life expectancy, they needed to make some decisions for themselves.

Importantly, more than just awareness, how could we make retirement relevant for Millennials and close the gap between intent and action?

Always a bit too serious.

A bit too heavy

A bit too pessimistic.

A bit of over-explaining all the time.

While future planning is an intimidating subject, we don’t have to be. Perhaps the best way to approach a serious topic is to have a little fun with it.

To some, #adulting is just a virtual, made-up word that doesn’t mean anything. But for our Millennial generation, it’s as real as realising that recess is over. Forever.

We wanted to leverage on the #adulting moments and help them recognise the need to plan ahead without sounding like a nagging parent or a pushy insurance agent.

We gathered some Singaporean Millennials and got them to share some “#adulting moments of truth” when they realised they had turned into “grown-ups”. 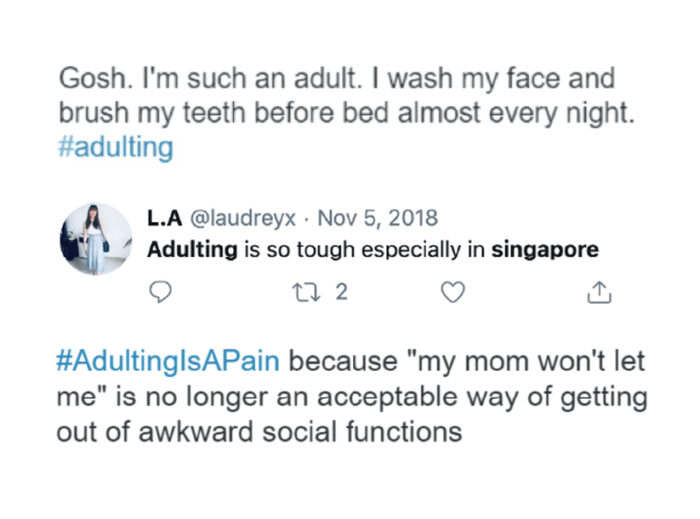 Whether it’s sneaking out of the club to have an early night or realising that you’re getting invited to more meetings than parties, we turned these “moments of truth” into visual scenarios that our target audience could relate to.

If you could relate to these scenarios, then it was probably time to start #adulting and planning for your future.

Our challenge was two-fold when it came to closing the gap between intent and action:

We had a series of films depicting “#adulting moments of truth” to sting them into action and why they needed to start thinking about a retirement plan.

These films ran in cinema and on social platforms – both of which are Millennials’ favourite haunts. Specifically for cinema, we went in with year-end blockbusters. 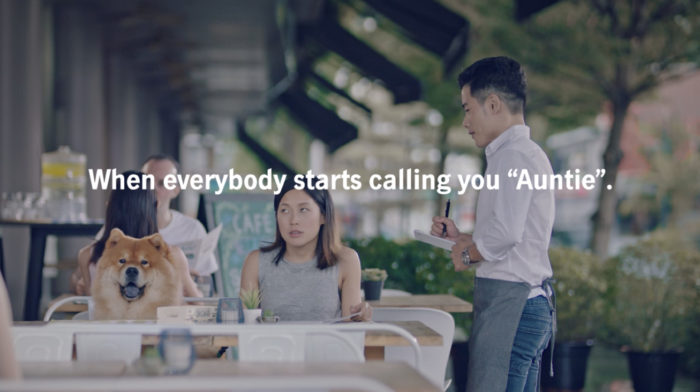 Then we flooded the Millennials’ transport of choice – train stations, taxis, buses. All of which carried different cheeky, contextual messages reminding them why it was time to start planning for retirement. 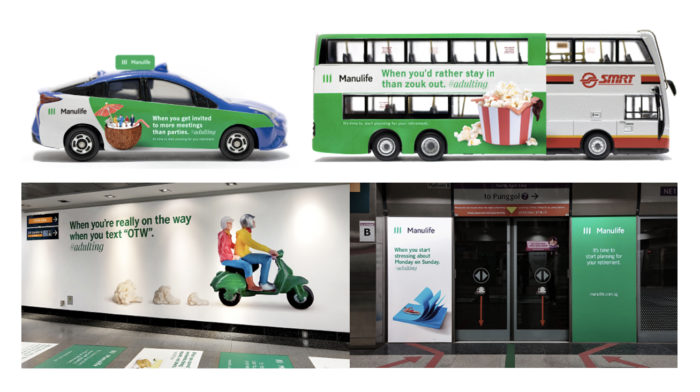 Taxis that reminded you that the only invitations you received were for 8am meetings.

Buses that take you home at 10pm on a Friday night while you think about the times you had spent partying until 6am.

Missed the train? Perfect. Here are some platform stickers that you can reflect on for the next five  minutes.

To keep the campaign fresh, social content featuring more playful #adulting scenarios, along with useful tips and features of key Manulife policies, were released throughout the campaign period. 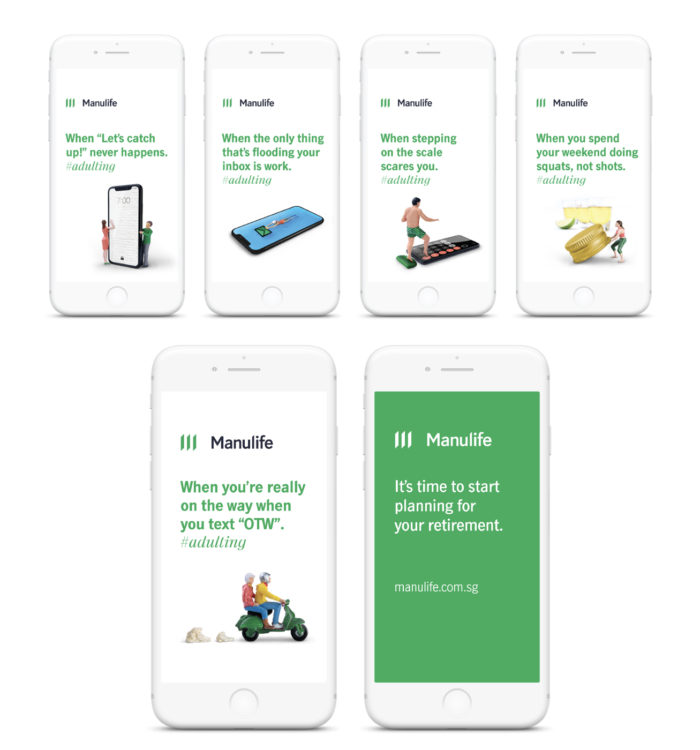 The advertising efforts were further supported by a series of PR articles in Singaporean publications, busting myths about retirement and exploring Millennial attitudes to financial planning. We also had an editorial full page of content in the Straits Times on retirement, drilling down on retirement product benefits.

All of these activities drove Millennials to a dedicated #adulting landing page where they could find out more about the products, and start a conversation with a Manulife advisor. 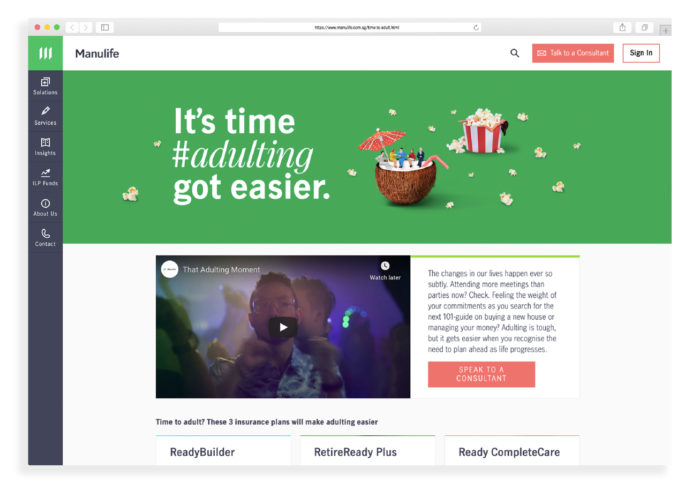 Our goal was to provoke Millennials into action, and we did.

It was the best performing campaign in our 38-year history in Singapore.

Brand awareness went up 21%, lifting the brand from its No.7 spot to No.5. That’s a big feat within a short span of four months, competing against established players!

Brand recommendation among 20-39 year olds saw a tremendous 92% increase, the highest ever in the brand’s campaign performance history.

The films had total combined video impressions of over 10.3 million – with a high number of shares among Millennials. 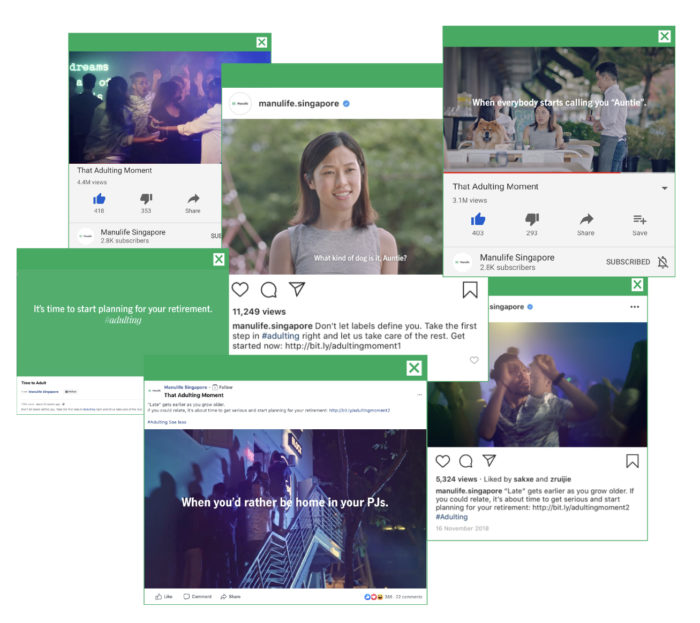 “Earned” a cheeky “clapback” from Zouk just a week after the campaign launch – in response to one of our #adulting moments. 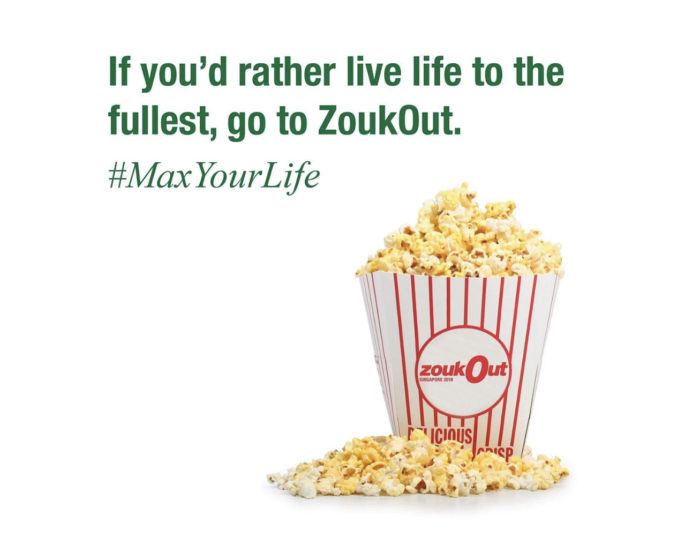 The real proof of effectiveness lay in the hard business results. The campaign achieved an increase of 37% in purchase intent, which led to Manulife exceeding sales targets by 30% .

Nearly 50% of news sales came from the flagship RetireReady Plus product, with the remainder split between the other two products.

Making retirement relevant to Millennials through what we say, how we say it, and where we say it in the most seamless way possible. And helping Millennials in Singapore take action about their future while putting a smile on their face.