The Saddest Raya Ad released by The Greatest Hits on Monday on YouTube has garnered more than 175,500 views and also some mixed reviews.

The 4 minute-plus ad makes a comical reference about the industry and agencies in light of the Hari Raya celebrations by bringing viewers through a supposed filming of a Raya ad, with the subject being put through a series of situations in order to create a more 'dramatic' ad.

Hardesh Singh, founder/director of The Greatest Hits, said the idea was to simply show that it is okay to be happy, especially during festive seasons.

However, it is apparent that viewers are divided on their opinions of the ad, with some saying the ad is food for thought on what has become cliche Raya ads, while others said the ad portrayed Raya values in a bad light.

For those who enjoyed the ad, they understood that this ad is meant to be a parody to raise awareness about Raya, which should be celebrated in a positive tone and the message is to question why Raya ads are generally melancholy when it doesn't have to be that way.

A user by the handle AakuhPendi wrote:

"Bros, this is not a real ad. It's like a parody or something to give you awareness that we should celebrate Raya in a happy mood. Well yeah basically there's a message there especially with the common Malay melancholy storyline. So understand the message and create a better Raya" - AakuhPendi

On another extreme, some say it may have gone too far in mocking the unprivileged.

"The person who came up with the video needs to understand the true meaning of Raya before condemning or criticize the sad Raya ads about the unprivileged, a mum waiting for the son's homecoming and so on. There are many lessons to be learned from these stories, one of it to remind us not to forget those who are in need and even our loved ones. This video deserves in the bin as actors are like children. Sorry to say, thank you very much" - Nazri TSS

Some comments were racial in nature, while others just prove there are some very confused viewers out there. One viewer even said people should not be arguing over an ad as it has little importance.

Ted Lim, chief creative officer, Dentsu Network Asia, told A+M, "There is nothing wrong with sad ads, or happy ads for that matter."

He adds that he doesn't think the reaction from the ad is even about advertising. "Self-serving politicians are getting Malaysians all worked up and using religion to turn one race against another, preaching hatred instead of harmony," he said.

Lim add: "Everyone is so sensitive about everything. They see insults when it's not intended. Racist politicians have robbed Malaysians of their sense of moderation."

Perhaps Lim is right. Amidst the hullabaloos in Malaysia at the moment, perhaps the reaction from the ads is a reflection of the sentiments people have of what's happening.

Regardless, the saddest Raya ad has definitely brought to surface what everyone must have wondered for a long time - why the need for festive ads to be so emotional. Here's hoping for more cheery and positive festive ads moving forward. 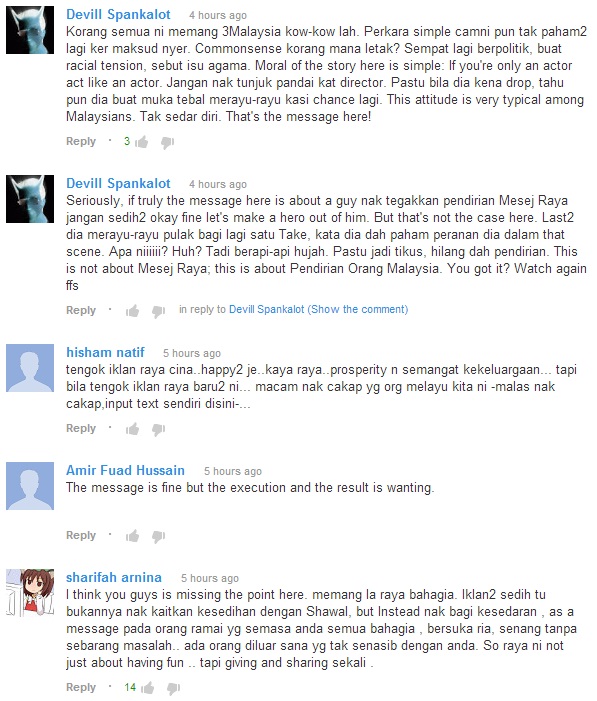 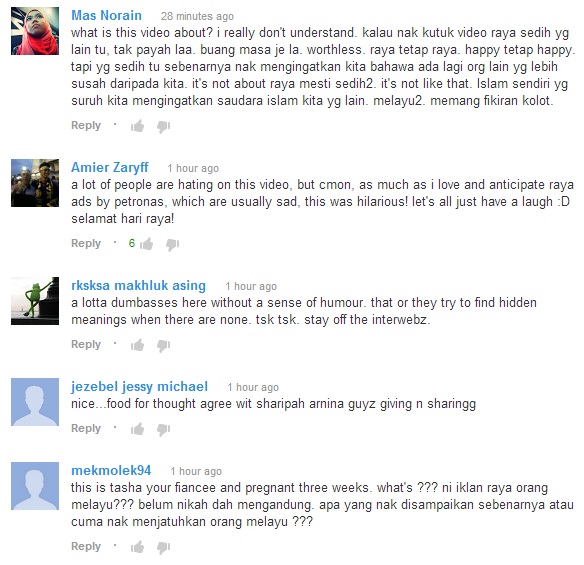