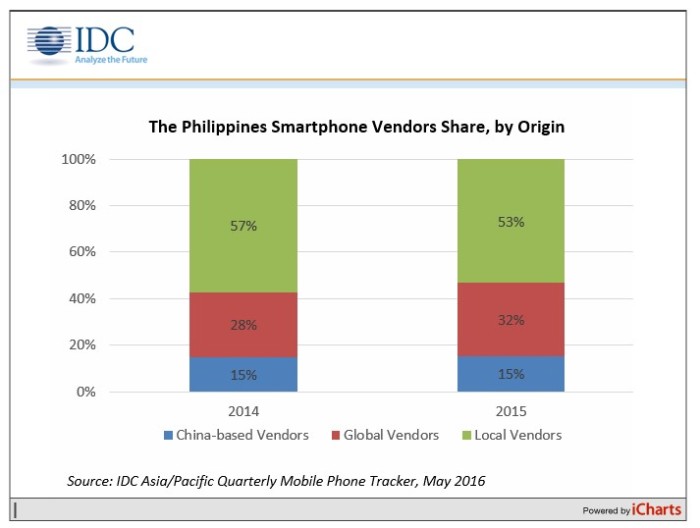 Local vendors continue to dominate the Philippines smartphone market as they flood it with the most affordable smartphone options. Dominguez stresses that, "Smartphones priced below Php3,500 still make up the majority of smartphones shipped to the Philippines. MyPhone’s successful budget my28S model catapulted its lead in the smartphone market in 1Q 2016. However, this is no reason for the homegrown brands to rest on their laurels as Global and Chinese vendors are gradually catching up on the budget segment.” The past few quarters have shown vendors like Samsung and ASUS playing more aggressively in the lower-than-Php6,000 space. China-based vendors OPPO and Huawei are also on a steady growth track as they continue to expand channel coverage.

“As the Philippines smartphone market matures and shifts from being an acquisition game to a replacement one, consumers are expected to demand more from a smartphone in terms of specs and performance,” says Dominguez. "One sign of the local smartphone market gradually maturing is the move among entry-level players away from less than 1GB random access memory (RAM) toward higher RAM chips. From 44% share in 2015, less-than-1GB-RAM smartphones dropped to 38% last quarter as consumer demand for higher RAM for new mobile applications to run smoothly."

With the mobile brand war growing more intense by the day, vendors would be well-advised to not be complacent, but rather continue to foster innovation and improve product quality and after-sales to stay ahead of the game. “Defect issues and poor after-sales continue to plague the smartphone market. It is only a matter of time before majority of Filipino consumers put more premium on smartphones that are not just easy on the pocket but also offer good value for money,” says Dominguez.

IDC expects smartphone shipments to the Philippines to grow by 25% this CY 2016. As more Filipinos adopt smartphones, telco operators should keep an eye out for further network congestion and adjust accordingly. Jubert Alberto, Country Head of IDC Philippines, says, “Mobile data explosion is an inevitable consequence of the growing smartphone user base so telcos should carry on with further expansion of their capacity and footprint nationwide. In terms of increasing accessibility, it is also not enough for the telcos to provide subsidies to devices manufacturers; rather, it should also keep in check the price of mobile Internet, which still continues to be among the most expensive in ASEAN.” As the mobility trend and content consumption on mobile devices continue to flourish, IDC also predicts that smartphones in the 5in.−5.5in. screen-size band will continue to dominate this year.