His tragic death occurred last month, but even within just 18 days, the Fast and the Furious star Paul Walker has since become the most searched term on Google Philippines in 2013.

The American actor leads the local overall searches, news, news makers and people search lists in the fifth installment of Google Zeitgeist for the Philippines, amassing enormous search traffic that takes a typical brand or person months to accomplish.

Filipinos’ love affair with gadgets remain strong as seen in the overall top 10, with Samsung's Galaxy S4 and Apple’s iPhones 5s coming in at the second and third spot, respectively.

The death of the Anti-Apartheid hero, which has consistently landed the top spots in the global polls and in other Google Zeitgeist lists, was nowhere in the top overall searches for the Philippines but did manage to land the 10th spot in the News and Newsmakers list.

Celebrities always get a lot of interest, Gail Tan, Google Philippines country communications manager, shared with Marketing, and people are especially interested to learn more about popular icons who pass away.

“Even in that short span of time the interest of the people were higher than the rest of the year when they were searching for something else. It could actually say that people here in the Philippines are celebrity centered.”

Asked for comment on why some recent serious natural disasters didn’t make it to the poll, Tan said that Google activity is relatively concentrated in urban areas around Manila.

“I’ll be more surprised if the elections were not in the top 10 or typhoon Yolanda was ignored. What I was surprised though was that Bohol earthquake wasn’t there. Maybe it’s because most of our users are in the national capital region while the event happened in the Visayas – then again, Typhoon Yolanda also occurred in the Visayas. You’ll never really know what people are searching for," she said.

While the overall list uncovers Filipino online obsessions in 2013, more specific lists also provide remarkable insights on what Google calls “the spirit of the times” which is now not just gleaned online but is now increasingly being made in the digital space. Below is the full Google Zeitgeist 2013 list for the Philippines. 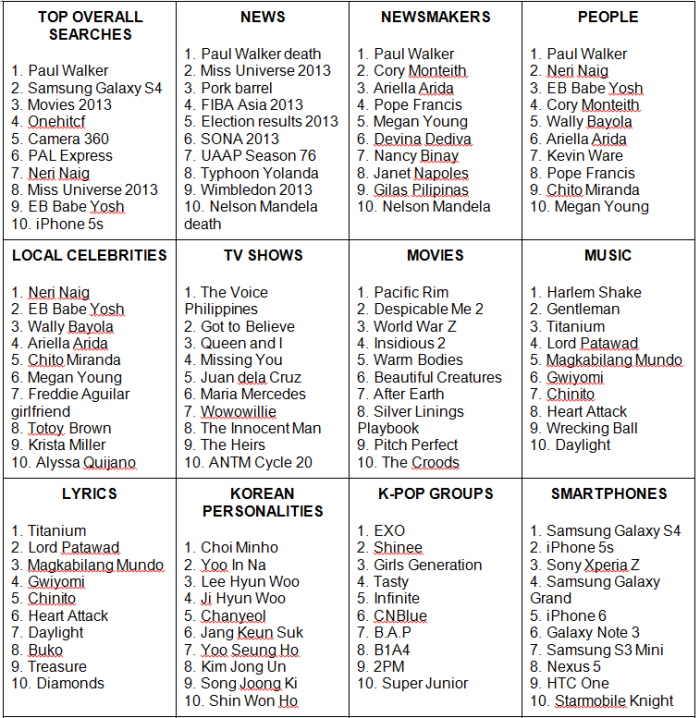 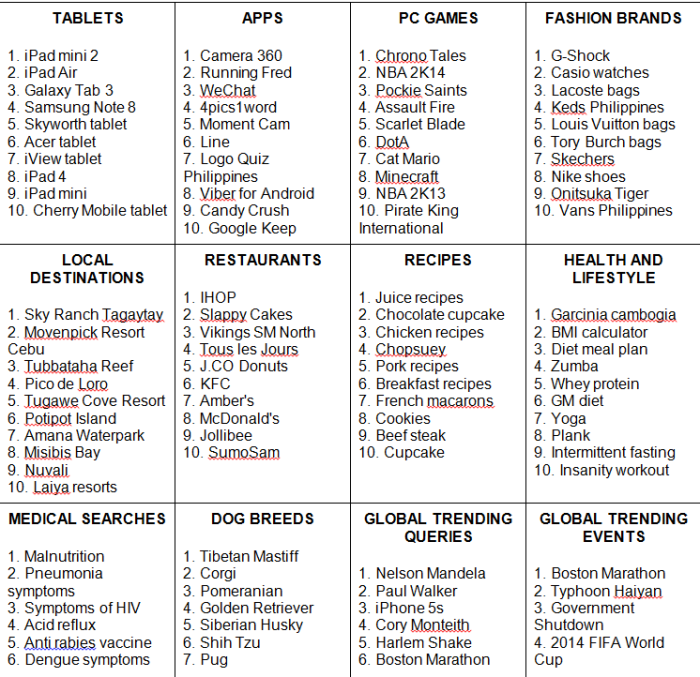