Only 6% of APAC companies are AI leaders, says Microsoft-IDC study

While majority of business leaders (80%) in APAC agree that AI is “instrumental” for their organisation’s competitiveness, only 41% of companies in APAC have embarked on their AI journeys. This is despite the prediction that AI is expected to nearly double (1.9 times) the rate of innovation and employee productivity improvements in APAC by 2021.

According to the “Future Ready Business: Assessing Asia’s Growth Potential Through AI” study by Microsoft and IDC Asia/Pacific, only 6% of organisations have been identified as AI leaders as they have already incorporated AI into their core business strategy. Traits of an AI leader include increasing investments annually to support an organisation-wide AI strategy; having a centralised team of specialised roles to develop and validate AI models and complex analytics; as well as having AI analytics and tools such as robotic process automation and natural language processing.

This move, according to the study, has allowed them to nearly double their business benefits today as compared to other organisations. These organisations that have adopted AI also expect it to increase their competitiveness by 2021. However, they also face three challenges – a lack of thought leadership and leadership commitment to invest in AI; a lack of tools and infrastructure to develop actionable insights; and a lack of skills, resources and continuous learning programs.

The study, which surveyed over 1,600 business leaders and over 1,580 workers across 15 APAC markets, showed that to move ahead on their AIR journeys, organisations have to create the right culture. More than half of respondents believe that cultural traits that support AI journeys, such as risk-taking, proactive innovation, as well as cross-function partnerships among teams, are not pervasive today.

The five top business drivers for the adoption of AI are better customer engagement (26%), higher competitiveness (19%), higher margins (18%), accelerated innovation (15%) and more productive employees (9%). According to Victor Lim, VP, consulting operations at IDC Asia/Pacific, organisations that adopted AI saw tangible improvements in these areas last year in the range of 18% to 26%. The same organisations forecast further improvements of at least 1.8 times in the three-year horizon, with the biggest jump expected in accelerated innovation and competitiveness.

Is APAC ready for AI?

According to Lim, APAC is “not ready yet” for AI and in order to succeed, markets in the region need to “substantially improve” their readiness. Companies in APAC also need to build upon their strategy, capabilities and infrastructure to accelerate their AI journey. “Organisations’ leadership should make AI a core part of their strategy and develop a learning agility culture,” Lim said. He added:

They have to continuously invest in this transformative technology for the long-term success, sometimes without immediate returns.

Lim also said that there is “an urgent need” for talents and tools to develop, deploy and monitor AI models, along with the availability of a robust data estate with the adequate governance.

Meanwhile, Ralph Haupter, president, Microsoft Asia said that every company today is a software company, and increasingly, every interaction is digital. To be successful in this new world, organisations need to be a fast adopter of best-in-class technology; and secondly, they need to build their own unique digital capabilities, he said.

“Business leaders must now embrace a new culture, where innovation and continuous learning are core components of the organizational culture. It sets the stage for agility, adaptability and growth,” Haupter added.

Addressing the skills challenge in an AI-enabled workforce

The top three future skills required by business leaders in APAC include quantitative and analytical skills, digital skills, as well as adaptability and a continuous learning mindset. The demand for all three is higher than the existing supply, the study noted, also revealing that business leaders value soft skills more than workers expect. 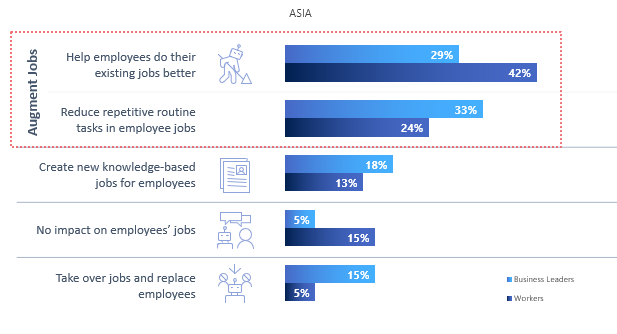 IDC’s Lim said that when it comes to creating or replacing jobs, 18% of business leaders believe that AI will produce new jobs, whereas 15% feel that the technology will replace jobs. Interestingly, workers are more optimistic, with only 5% expecting AI to replace jobs, while 13% anticipate AI to create new ones.

Meanwhile, Microsoft’s Haupter said that the company’s vision for AI is first and foremost about people and AI technology cannot progress without them. According to him, it is “heartening” to see that 84% of businesses prioritise skilling and reskilling of workers in the future.

However, Haupter noted that while they plan to invest as much or even more in human capital than in new technology, 64% of business leaders have yet to implement plans to help their employees’ to acquire the right skills, which is worrying in today’s context.

“They must have the urgency to support the fundamental shift in training workers for the future. The jobs of today will not be the jobs of tomorrow, and we have already seen demand for software engineering roles expand rapidly beyond just the tech sector. However, building an AI-ready workforce does not necessarily mean an acute need for technological skills,” Haupter said.

AirAsia to fly between the Philippines and Japan

The agency will handle all media buying and planning including offline, digital, search, performance display and paid social media..

Bentley has appointed Accelerate Advertising as its regional marketing and PR agency in Asia Pacific, following a pitch...

The appointment is for the Singapore, Malaysia and Thailand markets. ..