The latest figures from Flurry, a mobile analytics firm owned by Yahoo, indicate an 58% increase in mobile app usage in 2015 driven by media, productivity and emojis.

With the exception of games, every app category posted year-over-year growth with personalisation, news and magazines and productivity leading the way with triple-digit growth. 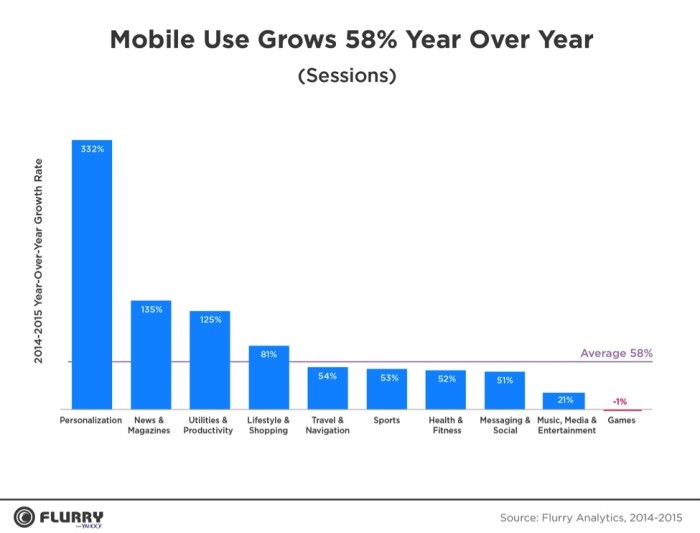 While the growth rate has declined (58% in 2015 compared to 76% in 2014 and 103% in 2013), it remains stunning as rates like these are rare in mature industries. Notably, the majority of that growth rate came from existing users versus new users.

Some 40% of the 58% total growth in sessions came from existing users, compared to 20% in 2014 and 10% in 2013. From a category perspective, the report shows four categories grew faster than the average.

Personalisation apps saw their sessions balloon more than 344% in 2015.

These apps range from Android lock-screens to emoji keyboards. The majority of the growth is coming from emoji apps (mainly keyboards) giving consumers the ability to share customized correspondence in their favorite messaging apps, such as Facebook Messenger, Whatsapp, Line and Snapchat. Kim Kardashian’s app “Kimoji”, for example, skyrocketed to the number 1 spot on the Apple AppStore, on its launch day.

Productivity apps continued the trend that started in 2014, with 119% sessions grow in 2015. More and more consumers, especially teens and college students are using their smartphones, phablets and tablets as their primary computing device and their sole device to access email and other productivity apps, like Google Docs, Quip, Slack and the Microsoft productivity suite.

While the overall growth rate of 58% paints an interesting picture, the Flurry analysis looks into growth rates cut by categories and form factors, especially phablets. 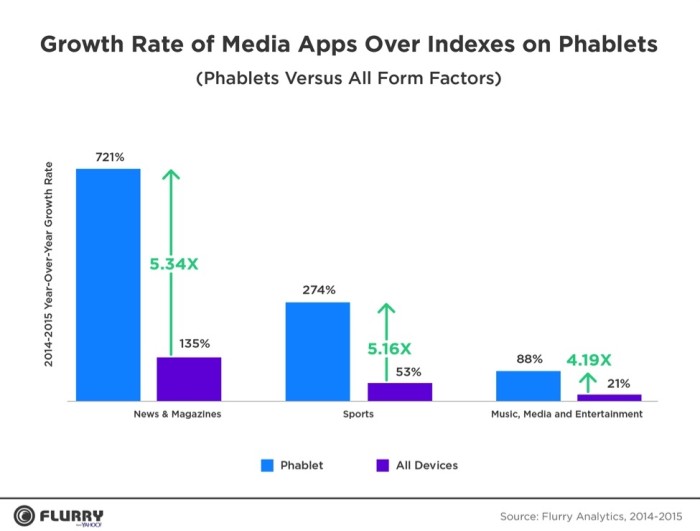 The chart shows the year-over-year session growth rates of the news and magazine, sports, and music, media, and entertainment categories on phablets and all devices combined.

Growth in news and magazines apps on phablets was about 4.8 that of all devices, meaning phablet users are engaging in these apps at a much higher rate than the average smart device user.

A similar pattern emerged for sports and music, media and entertainment apps, at more than 4.6 and 4 respectively. It appears that the extra inch of real estate has made the phablet the ultimate media consumption device. 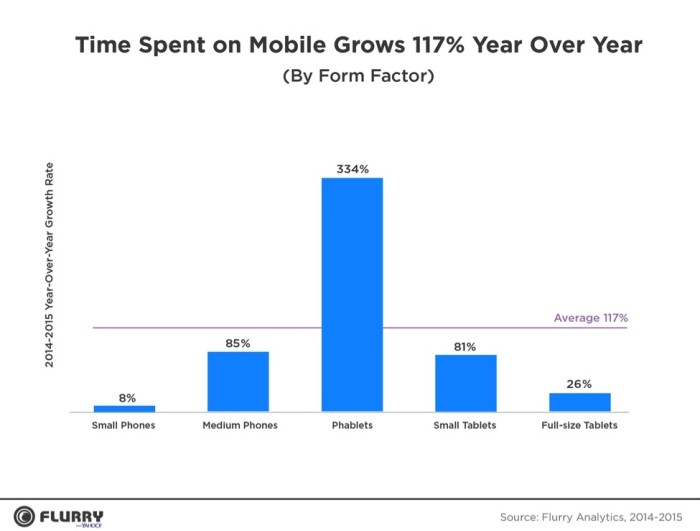 Time spent on phablets grew 334% year-over-year (2.9 times more than the average), compared to 117% for all form factors. With time spent on mobile surpassing that on television, and phablets posting astonishing growth in media consumption, it appears that the cable industry will find in the phablet and its apps its long-awaited digital nemesis. 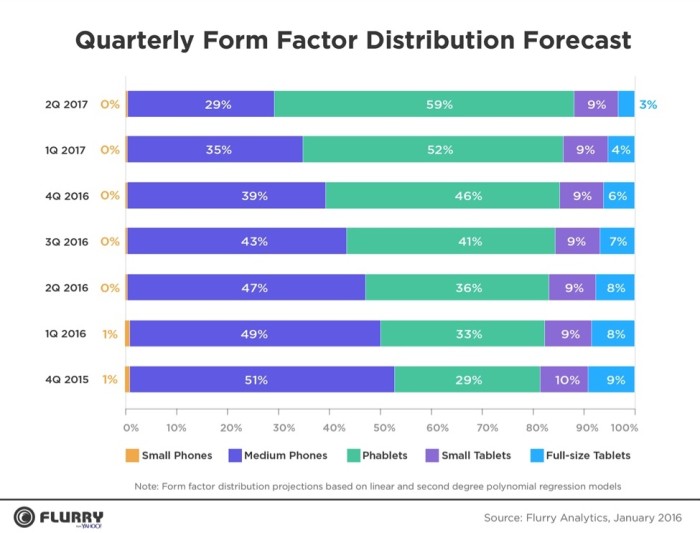 Above chart shows Fluury's forecast for worldwide device distribution, by form factor through the middle of 2017.

Also, small phones will be extinct by the second quarter of 2016. It’s clear consumers want their content, and they want it on a bigger screen.