Do you need stereotypes to market to women?

If you are a woman reading this article and the image of the Sheryl Sandberg-type power mum doesn’t resonate with you, well, you could always be a domestic goddess; or the vixen embodying every man’s desire. If all else fails, you could always be the insecure everyday woman just trying to find happiness. Whichever you pick, it looks like advertising has a type for you.

A decade ago, when Dove launched its incredible “Real Beauty” campaign with the help of advertising agency Ogilvy & Mather, the public lauded the diversity of the women depicted. But since banking on that strategy 10 years later, it looks like it could be wearing thin. The criticism surrounding its latest campaign, “Patches”, could be revealing – perhaps it’s been playing the image of the insecure woman for far too long.

The ad “Patches” showed an “experiment”, which saw an authority figure in the form of psychologist Ann Kearney, who studies body image issues, bringing in women to talk about their insecurities. She then gives the women a revolutionary beauty drug which works like a nicotine patch and asks them to document the results. Miraculously, the women feel beautiful. The campaign drew criticism: Are women so stereotypically insecure to fall for such a simple prank?

Marketers and advertisers are aware the roles and social stature of women are changing quickly, and they need to keep up.

JWT’s global planning director Atika Malik says advertisers are well aware that clichéd images of a woman in a spotless home or waiting on her family or being sensual is in no way reflective of the complexity of modern women’s lives.

While marketers are trying to communicate with women in a more authentic way, the real danger lies in simply replacing one stereotype for another – the perfect housewife for the multitasking mother, the pin-up girl for the hair-swishing vixen. This is not necessarily reflecting the changes in their lives in a nuanced way.

“Insights need to be rooted in the real world – and that world is changing fast every day. There are stereotypes of women that haven’t changed in years and their repeated usage proves that we as an industry don’t really understand our audience. Stereotypes are pretty dangerous for an industry that is built on human understanding,” she says.

NBCUniversal knows that women are conquering the world … one stiletto step at a time.

Based on insights and analyses gathered from a sample of 3,000 females aged 20 to 44 in Singapore, Malaysia, Philippines, Indonesia and Hong Kong, the study showed how advertisers and Pay-TV operators can better understand, connect and engage this highly coveted demographic.

One of the key highlights is that women in Asia can be classified into five unique and colourful identities that define them as consumers: career-oriented trailblazers; family focused heart-warmers; spontaneous passionistas; stability loving peacekeepers or people-savvy social-siders.

But whichever category one might relate most to, all five segments share a common desire in their TV viewing diets: a craving for content that is first, fresh and fabulous.

Programming on NBCUniversal’s bouquet of regional channels reaffirms this.

Popular general entertainment channel DIVA Universal showcases some of the hottest and most-talked about programmes around the globe, such as fashion-forward reality franchise The Face, the intense cooking competition My Kitchen Rules and the fast-tracked legal drama Suits.

Meanwhile, E! – the pulse of pop culture, and a social-sider’s haven – has extended its “Express From Hollywood” campaign to its sensational flagship reality series Keeping Up With The Kardashians, which will now premiere 48 hours after the US.

The High Heeled Warriors campaign established NBCUniversal’s position as the network of choice for advertisers targeting female consumers. We know women – they watch us.

Motto: “I want to stand out from the crowd”

Motto: “I want to live in the moment and have no regrets”

Motto: “I want a simple life: calm, stable and predictable”

Motto: “Life is great! I love my friends and I enjoy making new ones”

Asian women are doing it all – they are educated, independent and success-oriented; they have high expectations of themselves and their careers. They approach each challenge with increasing power, intelligence and capability while maintaining a natural command of respect and their traditional family values.

They are High Heeled Warriors.

The High Heeled Warrior Awards aimed to recognise and celebrate women living in Asia, from any age bracket, who contributed and created a positive impact in their community in one way or another. The awards highlighted the importance in the roles which women play in society – from business, arts, entertainment, community service and education.

“The roles that women play today have great impact on the lives of people around them and in society,” said Christine Fellowes, managing director for Asia Pacific at Universal Networks International.

“We believe women in Asia are High Heeled Warriors as they face growing expectations with increasing intelligence, independence and power. As the entertainment network that brings global brands women love and look up to, High Heeled Warriors Awards is our avenue of honouring women around us and their laudable achievements in life.”

The 2013 winners included Tjin Lee for the Entrepreneurship category and Lisa Surihani in Arts and Entertainment. For the Community and Service category, Mary Soan, and Jasmine Ong Kim Li in the Unsung Heroes category.

All these women inspire others and their influence is real and evident in the impact they play in society, propelling a nation and its people towards the future, be it in business, arts and entertainment or community service.

Through lending its support to the awards, luxury fashion and fragrance brand Hugo Boss and Boss Jour associates with women who approach life expectations with increasing power and capability.

Universal Networks International is a division of NBCUniversal, one of the world’s leading media and entertainment companies in the development, production, and marketing of entertainment, news and information to a global audience. NBCUniversal is owned by Comcast Corporation. 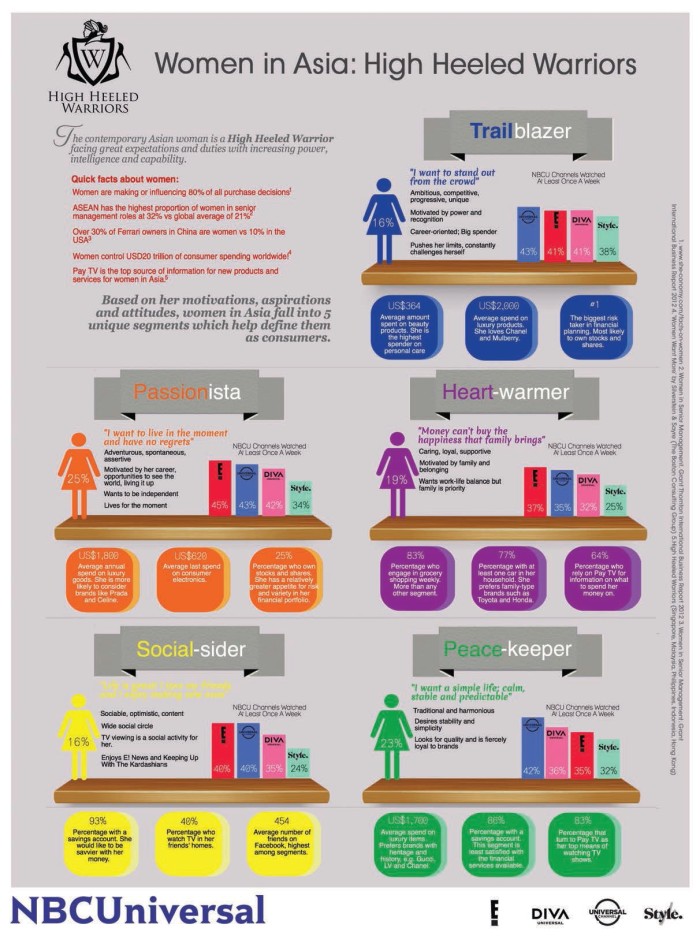