MASWings, a subsidiary of Malaysia Airlines (MAS) which operated throughout East Malaysia, has crash landed in Kudat yesterday.

“Malaysia Airlines confirms that its MASwings' Twin Otter, DHC6 9M-MDM MH3002 operating from Kota Kinabalu to Kudat was involved in an incident at 2.50pm on Thursday, 10 October 2013. The aircraft landed short of the runway in Kudat.”

While some applauded the national carrier for undertaking quick PR measures to get the news out, others questioned the decision to operate the Twin Otter, DHC6 9M-MDM fleet, which has a bad track record with several crash cases in the past.

According to the latest statement at 9am, the co-pilot and one passenger died in the crash while leaving two others injured out of 16 passengers on board.

“The investigation will be carried out by the authorities. Malaysia Airlines together with MASwings are fully co-operating and assisting the investigation in every possible way.

As per the aircraft maintenance record, the Twin-Otter was fit to fly and was in good condition before the accident.

Malaysia Airlines and MASwings will continue to monitor the situation at the crash site and update on the situation and will provide information relating to the flight itself and updates on steps being taken.”

MASWings also uploaded a cover photo to express their remorse for the adverse incident.

The airline seems to be prepared for such crisis but how does it fair in responding to comments on social media to minimise future flying doubts with the carrier?

It’s apparent on social media that the company has yet to reply to any of the comments related to the crash, which begs us to question if issuing press statements is enough to deal with the situation.

Are there any follow up measures that could be taken and what is the best social media crisis plan, especially for brands that are in the service industry? 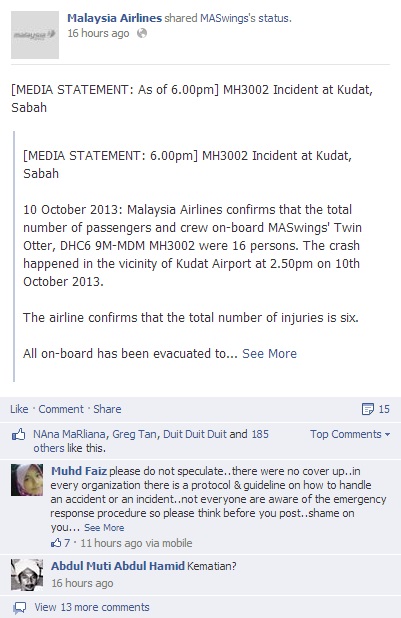 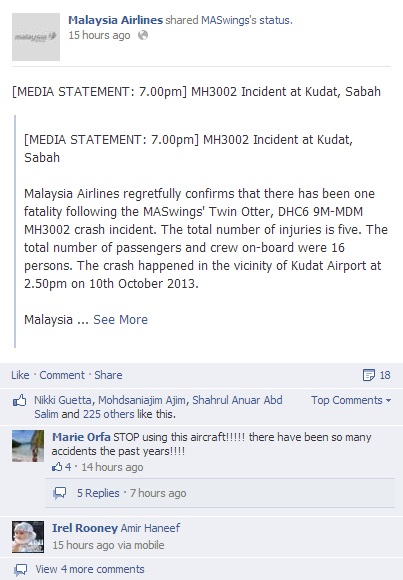 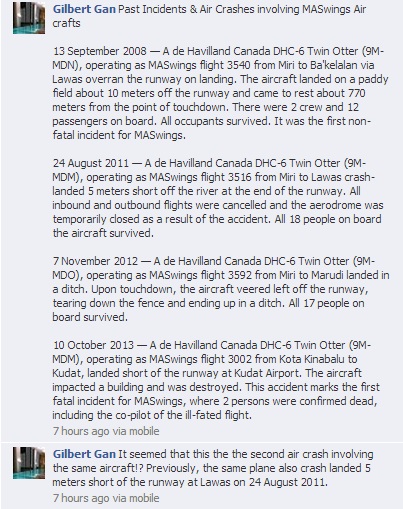