Malaysia is expected to become the number one developing market for real time bidding in Asia in 2014.

According to Magna Global, the strategic global media unit of IPG Mediabrands’ “The International State of Programmatic” research report on the programmatic industry, while Korea will dominate the programmatic share in the developing markets in the region this year with a spend of US$237million, Malaysia and Singapore will become the #1 and #2 RTB markets in 2014 with US$12million and US$10million of spend respectively.

The developing markets in Asia, according to the study, include Korea, Singapore, Malaysia, Hong Kong, Indonesia, Taiwan, Thailand Philippines and Vietnam.

In the developing Asia markets, total RTB spend will be US$54m in 2014 but in the following years RTB share will vary significantly between low penetration markets like Korea and Taiwan, and Malaysia and Singapore. The latter two are expected to pull in 30% RTB market share by 2018. 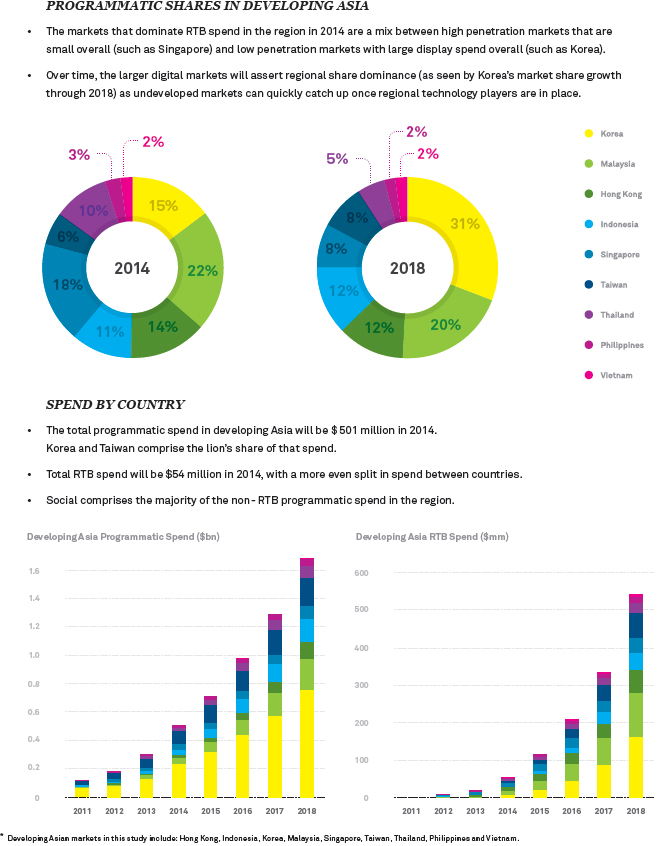 RTB being relatively new in most markets, is expected to over 50% of the total display market by 2018.

The report also concludes that while a successful programmatic infrastructure is not built overnight, the lessons learned from well-developed programmatic markets continue to translate into younger markets now entering this field, leading to fast-growth programmatic rates.

Also, in Asia, the combined size of Japan, China and Australia’s programmatic markets are six times larger than the rest of those in developing markets.

Meanwhile globally, North America is by far the leading programmatic market, accounting for more than half of the world’s total programmatic spend. This is followed by other big players like Australia, Japan, China and the UK. However, the growth rate of less mature markets shows a rapid acceleration in the industry. While the top 10 programmatic markets are growing by 39% this year, the medium and smaller markets will grow between 57% and 66% in 2014.

The conclusions in this report were derived from interviews with senior executives representing programmatic trading desks, DSPs and publishers, existing Magna Global research, and other publicly available information.