Janet Ayurveda, a local beauty brand which also markets deodorants has released a series of print ads in an attempt to promote its perfumed deodorant variants.

The ads, produced by Leo Burnett Colombo have drawn flak on Ads of the World's Facebook page, where it was first spotted, with mostly negative comments saying they are "sexist", "disgusting" and "horrible".

In the first print ads dubbed as "24 hours deodorizing duty", it shows a police woman seated on a desk, with four men captivated by the pleasant scent coming from the underarms.

The second version shows a nurse seated calmly on the doctor's desk which mesmerises four men in the hospital ward.

Subhash Pinnapola, executive creative director of Leo Burnett Colombo, told A+M, the idea behind the advertisement was to promote the fragrance which provides 24-hour body odour protection and putting the brand on top of consumers' mind.

The ad is targeted at women with long working hour profession such as police women and nurses.

Pinnapola added that since it's a short term campaign, the agency took the chance to move away from conventional way of marketing deodorant.

"Some ladies who have seen the ads got little uncomfortable because our people are not used to these sort of ads but that doesn't mean it's a bad ad. It's a very bold idea and we expected negative responses. Someone has to start something. How long do you want to do safe ads?" he added.

The print ads also appeared in the local newspapers and in posters displayed at boutique retailers.

Leo Burnett Colombo has been managing the account for six months now. 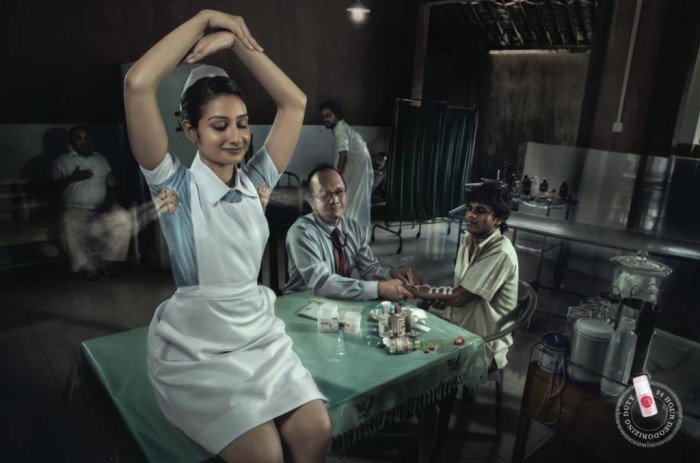 Photo credits : Ads of the World.