"Digital marketing for our brand has been slower in Hong Kong and Asia compared to the US," said Franky Ho, digital brand manager at LEGO Group in Hong Kong.

"Because digital content helps get parent shoppers to spend, we launched our first batch of digital initiatives this year."

The brand had previously focused mostly on in-store and traditional above-the-line marketing such as producing product-focused TVCs and placing ads in parenting magazines.

Today, digital makes up around 40-50% of LEGO Hong Kong's marketing mix and its digital marketing expenditure has gone up by around 20-25%.

The brand opened its Hong Kong Facebook page in early 2014 and is also present on YouTube and has a dedicated section on the Toys"R"Us Hong Kong website. 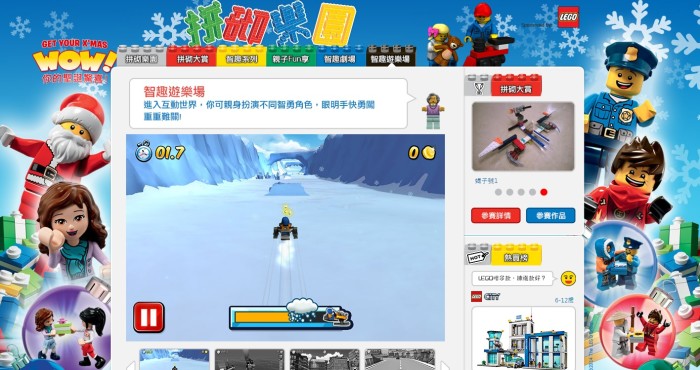 The mini-site campaigns are supplemented by banner ads and TVCs as well as SEM and mobile ad placements.

So far, the summer burst has fared better than the first one in terms of average time per visit and web traffic.

"Timing is an enormous factor - the toys industry is a very seasonal industry," Ho said.

Users frequenting the mini-site are split almost half and half between using PC and mobile to browse the site.

While one might assume that children would be the main audience for the mini-site, parents make up most of the visitors.  Over 80% of the web visitors are over 25 years old, mostly dads aged 30-44.

"This echoes the same pattern of web traffic to our YouTube channel.  This demographic really likes our videos," Ho said.

Content on the video channel include animations, product videos, cartoons and videos featuring product designers introducing their products, some of which are available on the mini-site.

An example is this arctic-themed video produced by LEGO:

In the product information pages within the mini-site, buy buttons link to pages in the Toys"R"Us eCommerce platform for the same products.

"Buy buttons help us track purchases and establish a more direct relationship between digital marketing and actual business.  It is a good indicator as to whether the digital content marketing we are doing is effective," Ho said.

"We also learn from this data which products are the most popular among customers in terms of clicks." 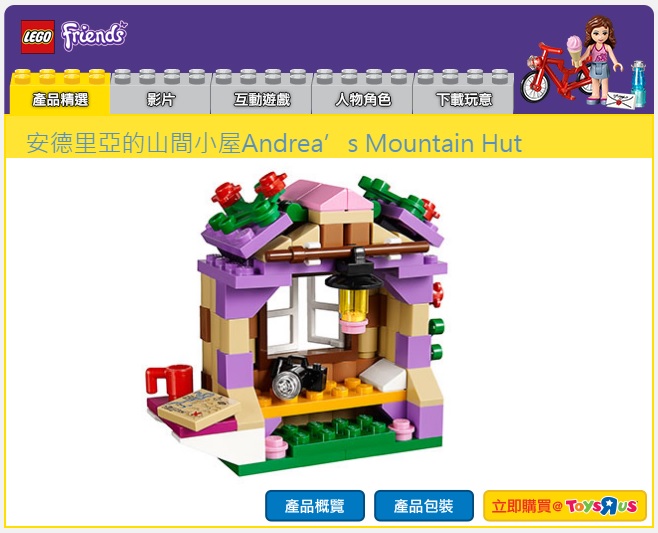 The brand does not have plans to launch its own eCommerce platform, which is available in other markets such as the US, and instead will continue relying on the Toys"R"Us e-store for online purchases in Hong Kong.

But not all components of the mini-site campaign is entirely digital - some of them cross over into the offline realm.

For example, building contests also featured in the mini-site ask children to build objects using LEGO blocks in line with a certain theme, whether it is swimming pools or icecream for summer or a dream plane for the winter.  These serve as O2O activation activities.

After the children build their models, they or their parents photograph them and submit the photos to LEGO for a chance to win prizes.  For the summer building contest, LEGO Hong Kong received around 100 submissions and received about 10,000 votes in the online voting process.

Integration across digital and offline platforms

To strengthen promotion of products across platforms, if a particular product under a particular LEGO brand, for example, Lego City, is advertised in a TVC, then the same product would be promoted through the mini-site and video channels.

For example, globally, the LEGO In-Store Action app uses augmented reality (AR) technology to allow customers to take photographs of LEGO figurines in retail stores, which then become animated on their smartphone screens.

Customers can then take selfies with the virtual and animated figurines and share them on social media.

LEGO has tentative plans to launch the app in Hong Kong in early 2015 in select retail stores carrying the brand's products.

Ho admits that it would be easier to organise O2O campaigns if LEGO had its own stores in Hong Kong, such as asking people to scan a box of LEGO blocks using a scanner in-store and then seeing it animated on screen.

However, he stresses that the brand does not have plans to open its own retail stores in Hong Kong at the moment.

Regionally, the brand's focus in Asia will be on branding, says Ho, especially building up homegrown brands such as Lego Friends in Hong Kong.  For example, this is currently done by broadcasting long form LEGO and licensed cartoons in some Asian markets such as Hong Kong and mainland China.

Being kid-friendly in the digital space is a challenge for brands like LEGO, which market products for children.  How much digital marketing should be geared towards children and how can you keep digital content age-appropriate?

"We have to be very careful when communicating with children.  YouTube and Facebook content are more for parents but we still try to be age-appropriate on these channels," Ho said.

"If a kid comments on our Facebook page and tells us they are five years old, we would tell them the social media channel is only for those aged 13 and above and ask them to have a parent by their side."

To help keep children off social media sites they are not yet old enough to browse safely, LEGO created the global LEGO TV app, a kid-friendly space where all videos are safe for children.  This app does not have social functions such as commenting and liking and does not link to external content.