Jetstar Asia has launched its their latest marketing campaign called #FridayFREEFlights . The campaign is a part of the Because You Can platform.

The initiative follows a survey conducted by the airline which showed 96% of Singapore residents wished they had travelled more last year, and many have never visited some of the top destinations on the Singapore’s doorstep. Over 59% have never visited Bali while 86% have never visited Siem Reap or Phnom Penh. The top three reasons cited were money (70%), work commitments (64%) and lack of time (49%).

To get people traveling, Jetstar is giving away instant weekend getaways every Friday till 13 November. Consumers take a passport selfie on Fridays, hashtag #FridayFREEFlights and include a caption of where they would rather be. Additionally, residents of Singapore will also be able to participate in a radio call-in tongue-twister competition to win Jetstar flight vouchers.

Fans based in Malaysia, Thailand, Indonesia & Philippines can also take part, and be rewarded with two flight tickets to Singapore. The campaign was amplified via a series of videos with a 360 selfie spin, which were adapted for Singaporean, Malaysian, Thai, Indonesian and Filipino audiences. 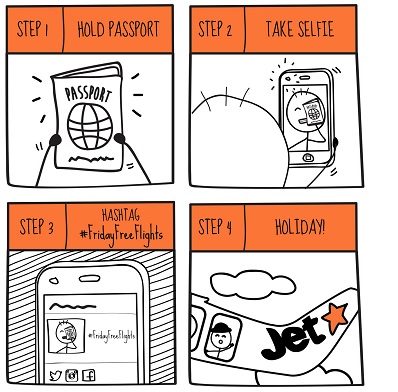 “Forget those three episodes of the latest must-watch TV series, in three hours you could be enjoying the Bali breeze or savouring dim-sum in Hong Kong, because you really can,” Chantal van Wijnbergen, regional marketing manager SEA said.

To further encourage travels, Jetstar’s Friday Fare Frenzy4 sale will be turned into Friday FREE Fare Frenzy for five weeks. Every Friday beginning 16 October, one destination will be on sale for zero dollars, excluding taxes and fees.