Iron Man is packing a new phone it seems. Hot off the heels of the box office behemoth that is Avengers Endgame, Robert Downey Jr. has revealed he’s endorsing Chinese smartphone maker OnePlus.

The Hollywood actor posted a picture on his Weibo account of himself standing in a suit and sneakers, with a smartphone in hand, standing in front of a sports car. The attached caption tagged both OnePlus and specifically the page for the OnePlus 7 Pro saying, “Good to work with a technology brand I can vibe with. Hey @一加手机 … Let’s do this thing. #一加7# ”. 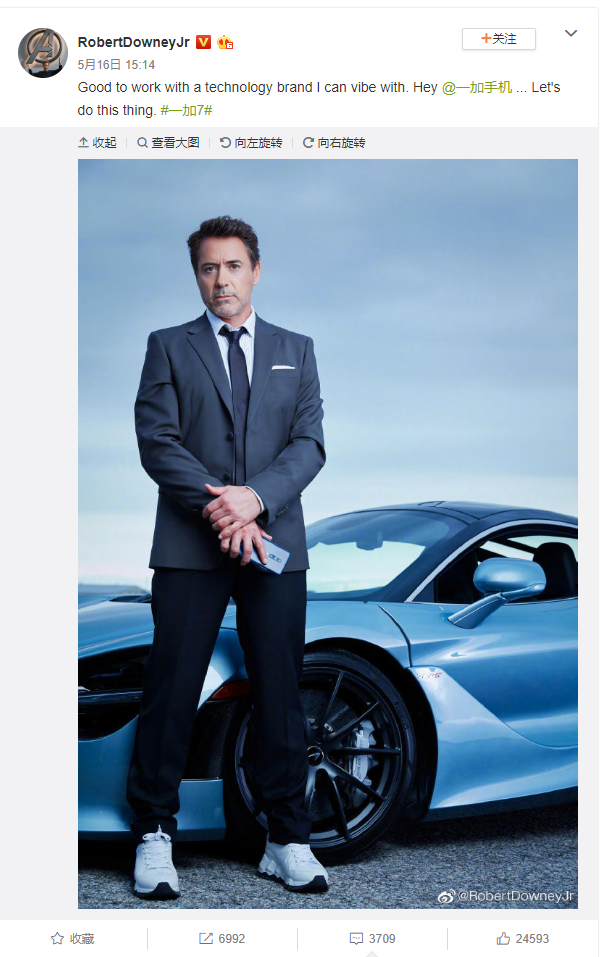 Eagle-eyed commenters were also quick to point out that the mobile in his hand was indeed the OnePlus 7 Pro and that the car behind him was a McLaren, a brand OnePlus has teamed up with before for the OnePlus 6T McLaren edition.

The post (which at time of writing has close to 25,000 upvotes) was soon followed by an online video ad for the OnePlus 7 Pro, featuring Downey pulling off a few martial arts moves while spouting some rather hackneyed lines about discipline and vision.

This is of course, not the first time Downey has endorsed an Asian phone maker. Back in 2013, he agreed to be the face of a series of strange ads for Taiwanese company HTC, in which the initials of the brand would stand for a range of odd things. The endorsement lasted two years and was not particularly successful. Unlike that global campaign, The Verge, having spoken to OnePlus has seemingly confirmed this endorsement deal will have a totally Asian focus.

It’s quite likely that OnePlus will have greater success with this Downey deal than HTC did. Though Iron Man was a popular hero in Asia back in 2013 – especially in China, where the self-assured tech business mogul Tony Stark identity was highly aspirational – six more years of Marvel movies has evolved him into a dream for brands; a beloved household name across the youth demographic. Unless Thanos snaps his fingers tomorrow, we can likely expect a lot more to come out of this deal.

This comes two years after the company was bought over by SingTel...

Peter Vogel to relocate from Australia to Hong Kong in coming months...

The annual culinary event is set to return in November, offering 40 stalls to celebrate Christmas and the new year. ..