Hong Kong’s video content viewing landscape has been competitive, making marketers follow the latest trend and viewing habit of customers to drive growth. According to the third edition of a Omnicom Media Group Hong Kong study done in partnership with Toluna, mature audiences have spent more time on digital video platforms, while penetration and time spent on OTT services have increased massively.

According to the study, the penetration of video viewing on digital platforms and the time spent on them among audiences aged 45 to 59 have caught up with younger audiences. In this study, 84% of respondents said they have watched digital video content platforms in the past seven days. Also, this group spent 14 hours on digital platforms per week but interestingly, traditional TV platforms have not witnessed a decrease in usage. 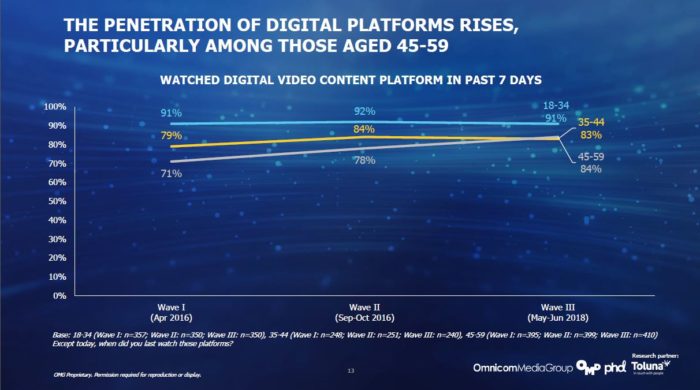 OTT video services have continued to soar with its weekly penetration and viewership rising from 38% to 55% and from 2.6 hours to 5.5 hours respectively since September 2016. With an array of providers spanning from international leaders such as NETFLIX, Fox + and HBO GO, to local production hubs such as ATV and OpenSky.tv, Hong Kong audiences have no shortage of OTT options. This implies that the digital video market is getting more diversified, with more advertising options appearing in the process.

The rise of digital video platforms has driven up overall video consumption. Platforms such as myTV SUPER, viuTV and NETFLIX have all achieved a significant share of market. Youtube and myTV SUPER are key drivers for the increase in digital platform consumption.

In Wave III, audience duplication is more concentrated among video platforms such as TVB, viuTV, Fantastic TV, YouTube, myTV SUPER, viu and now TV, especially for TVB, whose audience are highly duplicated on viuTV and YouTube. NETFLIX, however, seems to have gathered an audience base of loyal viewers with little duplication. Advertisers who deploy video advertising across multiple video platforms need to take this into account to ensure optimal investments. 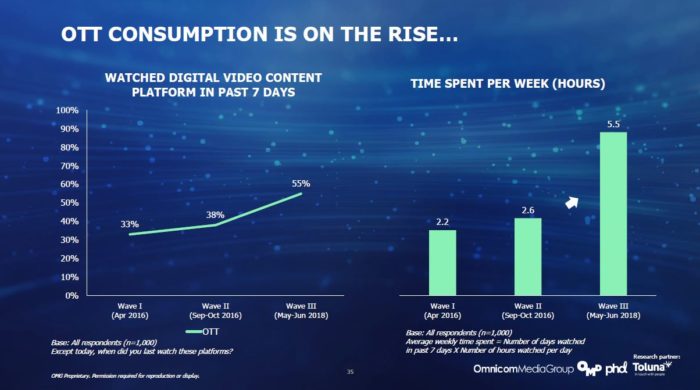 myTV SUPER has grown exponentially since its launch in 2016. With 40% penetration, it has tripled its reach since the study in April 2016, and doubled when compared with its Wave II results in September 2016. The time spent viewing per week has also seen a significant rise from 0.6 hours (Wave I) to 3.1 hours per week (Wave III) without cannibalising the time spent on TVB, implying that video consumption in general has increased. 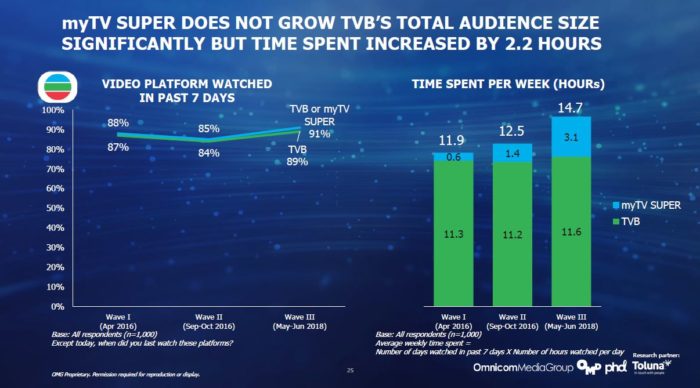 Hong Kong audiences considered lower amounts of advertisement a highly important factor when it comes to OTT platforms. In terms of monthly fees, they are willing to pay up to HK$58 per month, implying that service providers need to strike a better balance between customer satisfaction and source of revenue.

Last but not least, 85% of respondents are active viewers of videos on social media. Although video time spent on social platforms is low when compared against video-based platforms, the time spent has increased from 1.9 hours per week to 2.3 hours per week. Audiences have quickly adapted to watching videos on social media. This finding is not limited to younger viewers alone, but rather applies across the entire spectrum. 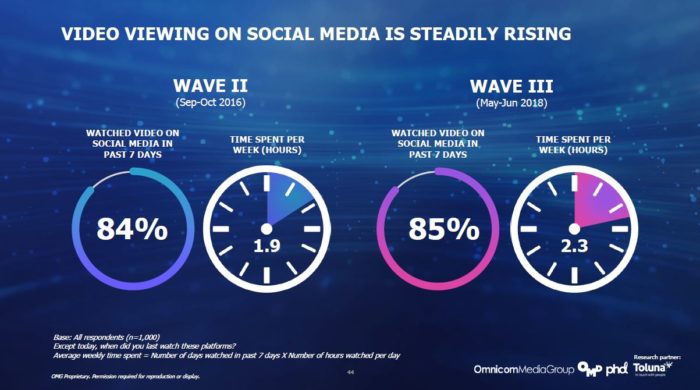 When it comes to outdoor viewing, 14% of respondents have watched outdoor TV in the past seven days, with an average consumption per person of 0.9 hours per week, equivalent to roughly 5% of viewers’ total TV viewing time.

“Given the entry of new video platforms, we wanted to gain a better understanding of viewing behaviours across the entire video landscape in Hong Kong. We needed to bridge the gap between the data reported by audience measurement providers such as Nielsen Media Index and HKTAM, to also cover the emerging digital video platforms. In doing so, we hope to paint a clearer picture for our teams and clients on emerging opportunities, and how we can more effectively invest in video advertising platforms,” said Deric Wong, CEO of Omnicom Media Group.

The survey was conducted from 24 May to 11 June, 2018. Online questionnaires were used to survey a sample of 1,000 users aged 18 to 59 who have consumed any video platforms in the past seven days. The first two phases of the survey was completed in April 2016 and October 2016.

Tackling the issue of data integration

What’s the challenge in data integration for marketers today?..

In a brand overhaul, Shiseido MAQuillAGE has humanly applied a set of 10 attitudes to its lip colours with a make-up marathon for ..

In recent months, Singapore Airlines posted a shocker to the public: its first quarterly loss in more than two years, a 69% year-o..

According to Dixit, the brand teams in most companies are advertising campaign managers, communications specialist and logo polici..

LOOK Manulife haunts with the realities of retirement

The insurance company puts down its foot regarding the costly reality of retirement with expenses ranging from water bills to hosp..