Even so, business remains indispensable to the community, with 62% of the general population agreeing that a company can take specific actions that both increase profits and improve the economic and social conditions in the community where it operates.

The most important social issues for businesses to address in Hong Kong are access to education, training and healthcare.

There are gaps to be bridged between the general population’s expectations of business and how companies are performing against such expectations.

Integrity attribute with a score of 37%, though only 18% believe that businesses are keeping up with expectations. 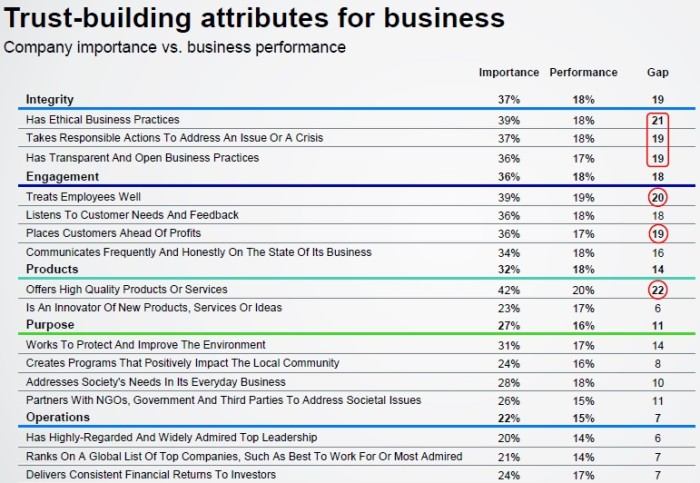 “Asia boasts some of the most trusting nations globally but Hong Kong is no longer one of them” said Bob Grove, North Asia CEO of Edelman.

“After dramatic declines, our results indicate an ongoing sense of uncertainty about the future. Only 36 percent of Hong Kong’s mass population believes they’ll be better off in five years’ time.”

Leaders play a decisive role in building trust in an institution. Respondents said they were keen for leaders to speak out on both financial performance and societal issues, while also providing personal views on topics such as income inequality and public policy.

Hong Kong’s general population believes that CEOs need to come across as real people, for example by communicating about their personal values (75%) as well as their journey to success (68%).

A company whose leader addresses societal issues does significantly better than one that does not, by 20 to 30-points among its own workforce.

For example, employees are more motivated to perform by 20%, more likely to do the best possible job for the customer by 19%, and 26% more likely to stay at the company when CEOs are personally involved in societal issues.

“With lack of talent often cited as a critical barrier to business growth, CEOs need to do a far better job at thinking beyond business performance in Hong Kong,” said Adrian Warr, senior director of Edelman Hong Kong.

“The Trust data shows that currently 41% of employees in Hong Kong do not even trust their current employer.”

Discovery boss atop 100 most overpaid CEOs

Tech glitch: How do you bounce back when your app goes rogue?

The recent Grab and McDonald mobile app glitches highlight how technology is not fail safe. We speak to marketers on their take on..

"Credentials of the agency is mandatory, with proven results that reveal it is not just all talk," she says. ..

The Brand Cellar expands to Asia

Global licensing agency The Brand Cellar has marked its launch to Asia, opening an office in Hong Kong to further its plans for ex..