From a catwalk protest in its Spring Summer 2020 show to "hacking" Balenciaga, Gucci has certainly turned consumers' heads to capture attention. Now, the luxury fashion house is showcasing old Hollywood glam with a modern take by featuring celebrities including Snoop Dogg, Jared Leto, Miley Cyrus and Squid Game actor Lee Jung-jae, among others, for its "Love Parade" campaign.

Surrounded by the cinematic aura of the #GucciLoveParade collection, Snoop Dogg sits down to a boisterous banquet in a satin suit paired with a velvet neck bow and cowboy hat, the luxury brand said in one of its Instagram posts.

Gucci also explained on YouTube that the campaign portrays the modern myth of cinema through a sequence of obsessions and desires. Captured by photographers Mert Alas and Marcus Piggot, the stars celebrate the ritual of the banquet.

This latest campaign comes after Gucci's creative director, Alessandro Michele, took over Hollywood Boulevard last November to showcase the "Love Parade" collection. Inspired by the golden era of Hollywood, Michele tapped on celebrities such as Macaulay Culkin, Jodie Turner-Smith, Jeremy Pope and Steve Lacy, among others, according to multiple media outlets including Vogue and Variety. According to ABC News, Michele drew inspiration from his experience of being raised as a "devout worshipper of beauty", "the gift of dreaming", as well as the "aura of cinema". 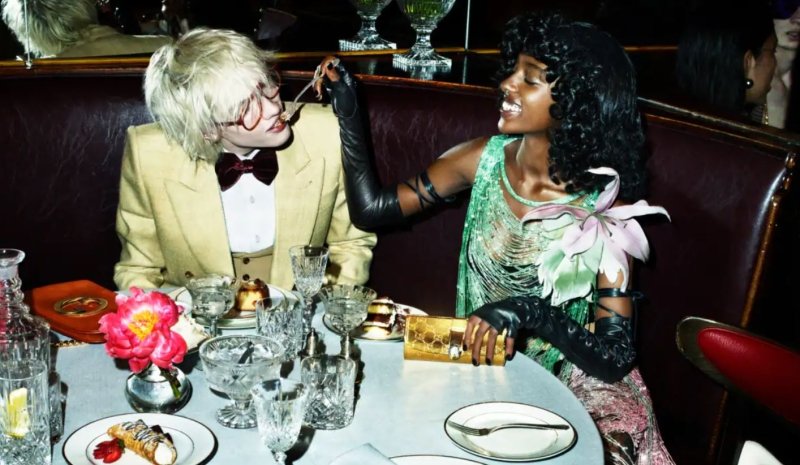 At the same time, Gucci has also created an experimental online space, from the vision of Michele, titled Gucci Vault. At the vault, consumers are able to purchase vintage fashion pieces, as well as Gucci's latest NFT collection, done in collaboration with animated celebrities entertainment brand, SUPERPLASTIC. The NFT collection included a three-part series that came with its own handcrafted porcelain sculpture. The first collection of 10 NFTs dropped on 1 February at Gucci Vault and featured 10 different whimsical scenarios with the SuperJanky figure from SUPERPLASTIC. According to Gucci Vault, the designs were inspired by Gucci Aria.

Additionally, Gucci has also doubled down on its commitment to the metaverse by purchasing an undisclosed amount of virtual land on The Sandbox, according to Vogue. According to a tweet from Gucci, the virtual world will feature its "Gucci Vault" platform, which is an umbrella for the fashion house's metaverse-related projects.