For quarterly ad spend performance across the year, there was no major surge and a slight drop in Q3 was recorded comparing to Q2.

As for quarterly YOY performance, Q1 recorded a relatively strong 8% YOY growth, followed by a 3% and 2% YOY increase in Q2 and Q3 respectively. Ad spend in Q4 2015 was almost the same comparing to that of last year.

The report suggests that marginal annual growth in ad spend might reflect that marketers were more cautious about their advertising spending, and the advertising industry lacked strong drive by retail sector, in particular Jewellery, Watches and Luxury products.

In terms of media channel, digital continued its growth spree with 51% increase in mobile sector and by 31% increase on interactive platforms.

This has impacted on traditional print media, which the ad spend in magazine significantly dropped by 15% and paid papers decreased by 6%. The biggest fall happened in Q4, which ad spend of magazines marked a record 22% YOY drop.

Notably, cosmetics and skincare sector had a staggering 110% and 48% increase in ad spend on mobile and interactive platforms respectively, while reducing its ad spend in magazines and on paid papers by 26% and 16%.

Meanwhile, retail sector could not sustain its strong growth over the past years in 2015 with luxury products suffered the most.

Among the top 10 industries, Jewellery, Watches and Luxury Products was the only industry that recorded a YOY drop in ad spend (-14%), and within the sector, Watches and Clocks even have a 22% YOY decrease. 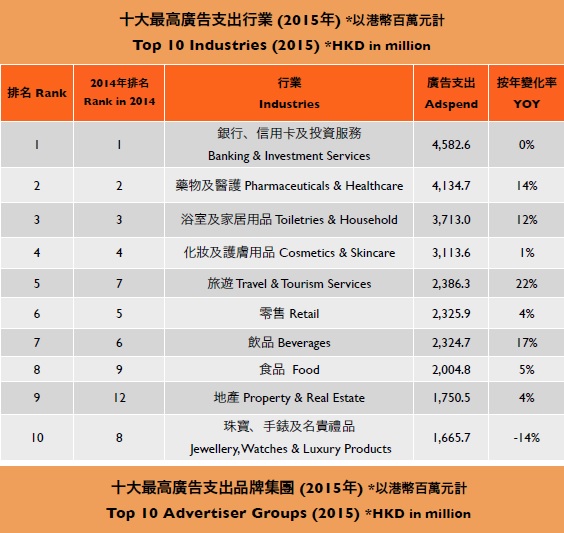