Google enters 2017 as the world’s most valuable brand, knocking Apple off its perch for the first time in five years, according to the latest Brand Finance global 500 report.

The tech giant last occupied the position of the world’s most valuable brand in 2011. The company remains largely unchallenged in its core search business, the mainstay of its advertising income. Ad revenues were up 20% in 2016 as budgets are increasingly directed online and Google finds more innovative ways to monetise users.

The report generally defines “brand value” as the amount of money it would take to hypothetically license a brand name.

The report said Apple has struggled to maintain its technological advantage, with new iterations of the iPhone delivering diminishing returns, while the Chinese market is now crowded with local competitors. "Apple has been living on borrowed time for several years by exploiting its accumulated brand equity. This underlines one of the many benefits of a strong brand, but Apple has finally taken it too far."

View the world’s 10 most valuable brands below: 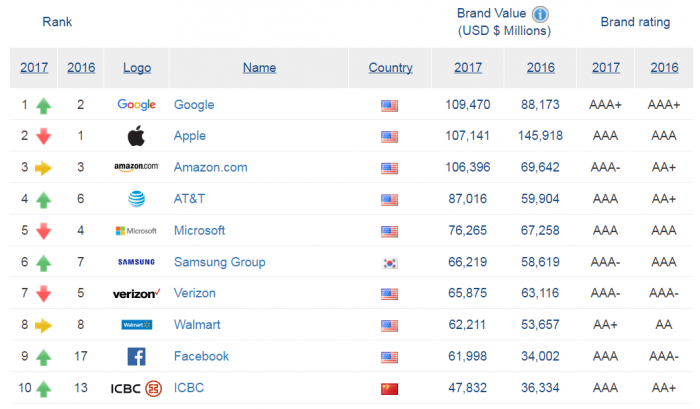 Take a look at some highlights of the study: