Chinese New Year is here, and we definitely feel it on the Marketing magazine team as cookies, tarts and ang paos make their way into the office (Thank you!!!). Last year during the Chinese New Year period, Katie Ewer, strategy director, JKR told Marketing that despite the digitally savvy population in Singapore, traditional ang paos still have a special charm during this festive season.

She shared that there is no shortage of “iconography” at the disposal of the designers, brands and businesses in creating these physical ang paos. Just like anything in marketing, Ewer said that the issuance of red packets is a battle for brands to get noticed and chosen.

“With businesses giving away red packets in the run up to Lunar New Year, the objective is to get selected to carry good fortune (and cash), so your brand finds itself directly placed in the hands of one consumer, passed on from another (with no commission charged!). With each transferral, your brand hopefully benefits from positive associations of wealth and good fortune,” Ewer said.

With that in mind, we handpicked some of our favourite ang paos of the many we received in the office. Here are some of our top picks:

Manulife prides itself on being a people-centric business and see the practice of handing out red packets as an extension of the brand, as well as a touchpoint that resonates with clients and customers who observe the Lunar New Year, said Cheryl Lim, VP, head of branding, communications and sponsorships at Manulife. She added that its 2020 red packets were printed on weighted card stock as an evergreen archetype of form and function. 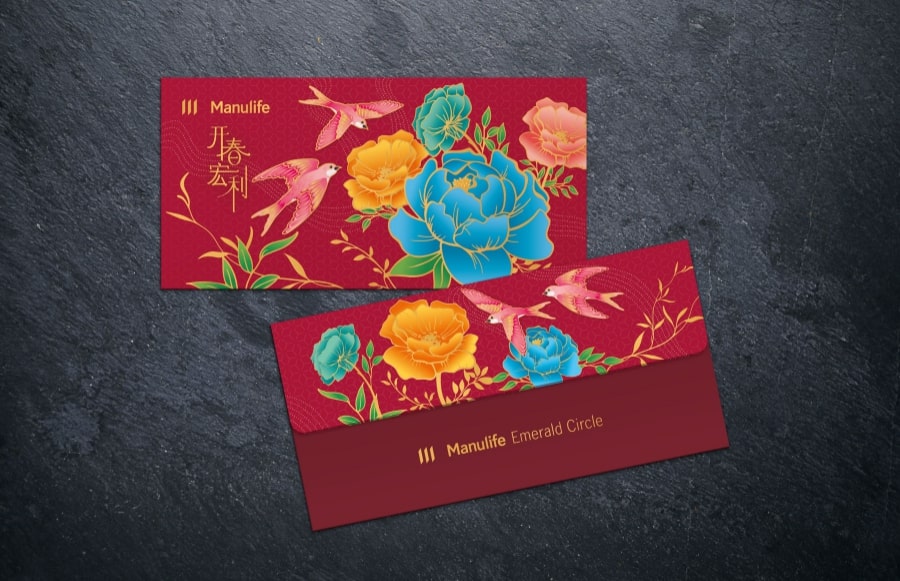 Gifting physical ang paos has been a tradition for media players Moove Media. Moreover, the company consistently ups its creativity with ang paos every year. In the year of the rat, Moove Media aimed to play up the idea of the cheese-loving rat. The unusual yellow coloured ang pao comes with a furry rat tail bounded to it, and has a 3D effect.

Design: Pisces of cheese and a rat feeding on a cheese block 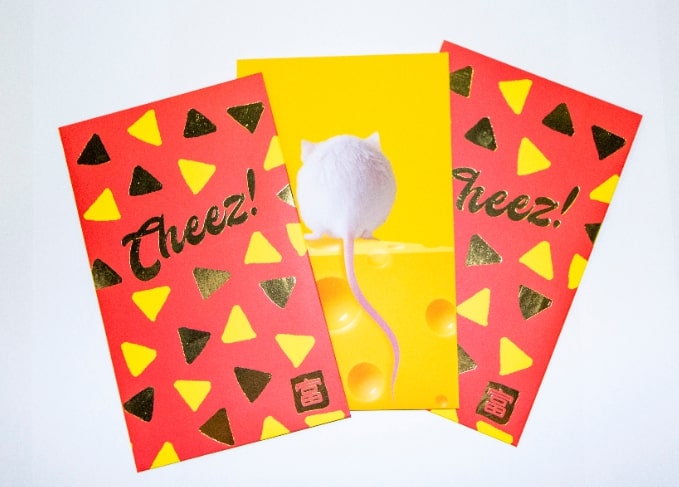 For creative agency MAAD Creatives, red packets serve as a form of branding, as recipients often compare and remark on which designs they love best. As with any product, a recipient forms a bond with the brand and red packets are a cost-effective medium to enhance (or even spoil) a brand's image, creative director Max Chionh said. This year's red packet serves a secondary purpose, as recipients can use it as a Daruma (Japanese wishing doll) to set their goals.

Design: A rat-faced Daruma, surrounded by merlions and gold coins 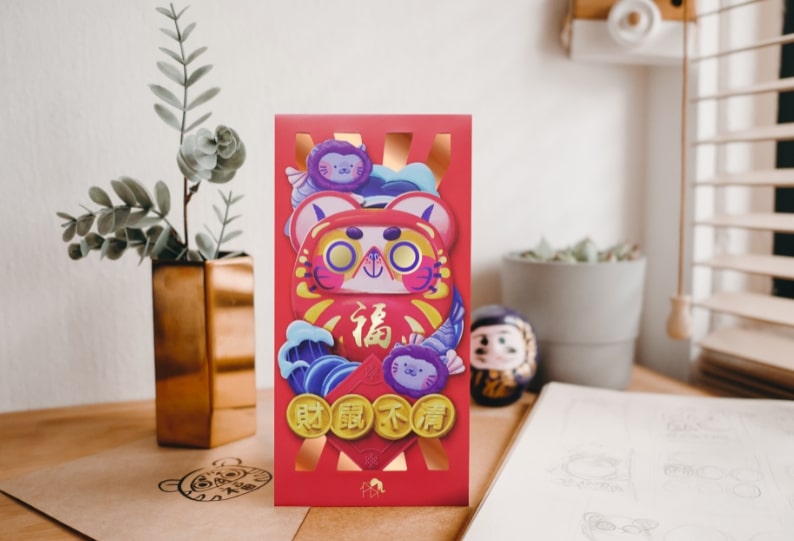 With a local presence of over 100 years, the physical red packets are an ode to MSIG's traditions and invaluable partnerships. Moving towards a sustainable future, the CNY red packets are printed on Forest Stewardship Council (FSC) certified paper that has been sustainably sourced and have been packaged to omit plastic and to reduce wastage. 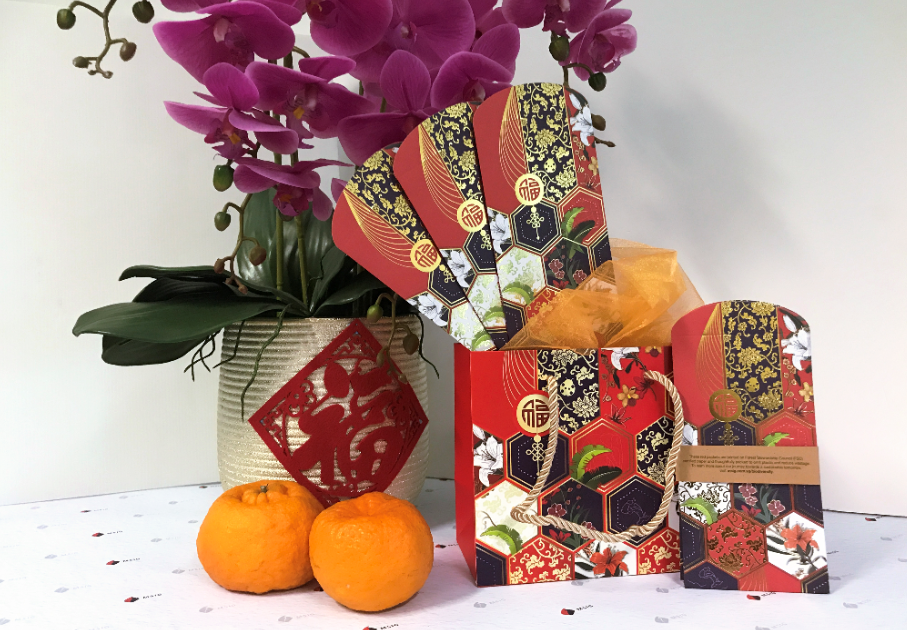 Separately, MSIG Asia too created its own red packets embroidered with spring flowers and multiple rat silhouttes. According to MSIG Asia, Chinese people still hold dear to traditional customs in a deep and meaningful way such as receiving and giving out physical red packets as a symbolic gesture of happiness and good luck. 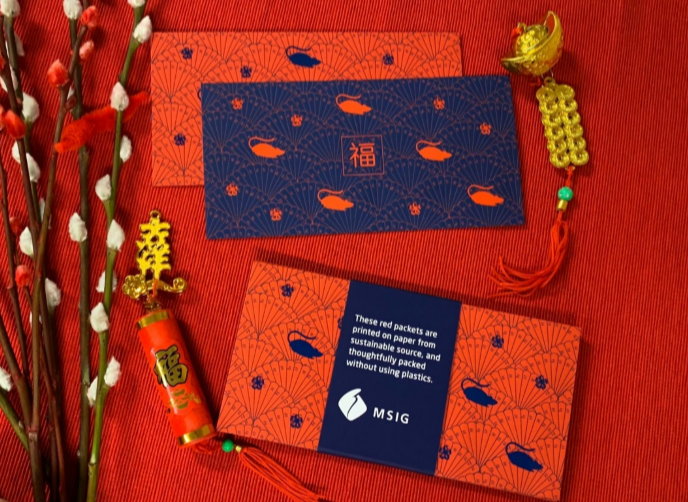 Producing corporate-branded red packets is also something the agency continues to do as clients look forward to being surprised by the creative designs and spin on the zodiac year. Jerry Low, Southeast Asia head of marketing, Schroders Singapore said the agency limits its quantity and focuses on quality. This year, Schroders partnered with social enterprise Personalised Love to conceptualise on microfibre leather pouches for the ang paos. 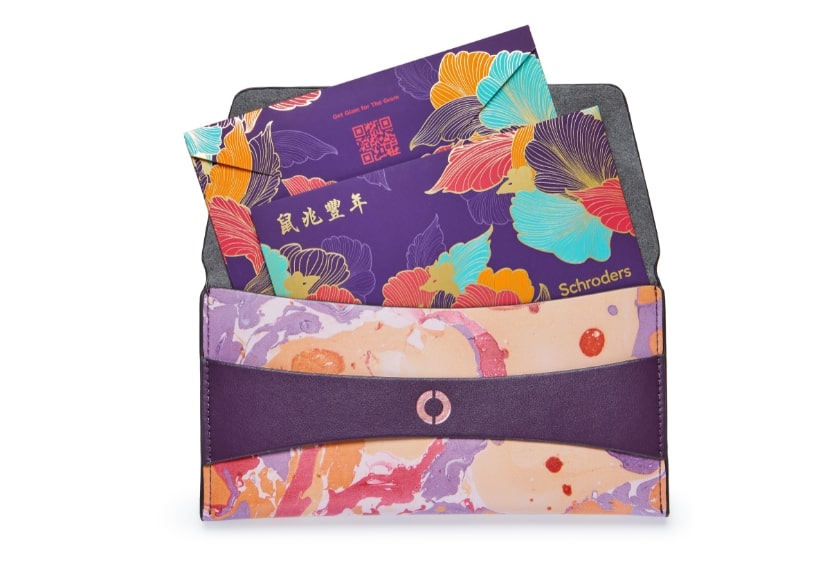 As the Chinese New Year tradition of giving and receiving paper red packets is very much alive, Cassie Fong, assistant vice president, corporate communications and sustainability said red packets are tangible interpersonal acts of goodwill. In the spirit of sustainability, the telco has also produced electronic greeting cards for staff to send well-wishes to business partners, colleagues and friends.

Design: Covered in gold rings with a full bloom peony at the centre 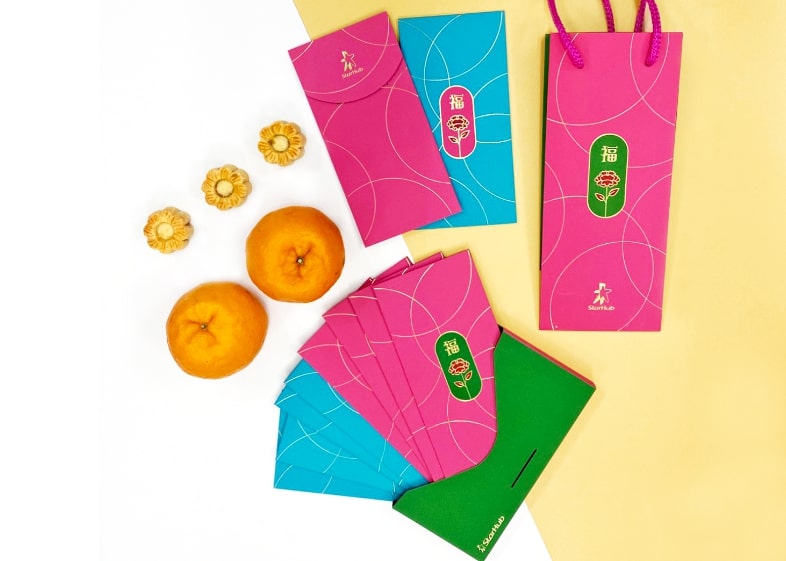 Do these red (and sometimes blue and pink) packets catch your eye? Share with us your favourites at farzanahf@marketing-interactive.com.