To raise awareness for both the FOX and FOX Sports brands and “The Walking Dead” TV series.

The first was a First Pitch Zombie Invasion during a Chiba Lotte Marines baseball game on 30 September and the second stunt was held on 31 October which saw around 1,000 zombies storm the iconic Tokyo Tower Zombie Invasion.

For the First Pitch stunt, pre-publicity efforts were done through Facebook postings and also website announcements. The Chiba Lotte Marines baseball team announced the invitation via a call-to-action press release that was published on their website and their print magazine.

For both events, FIC worked with a PR agency for press invitations, as well as press interviews with newspapers, magazines and two radio stations prior to the Tokyo Tower stunt.

For the Tokyo Tower stunt, the idea was to raise FIC Japan’s brand awareness regionally by staging a promotional stunt at one of Tokyo’s iconic landmarks.

For the Baseball First Pitch Zombie Invasion, FIC Japan engaged a popular female comedian Emiko Kawamura to throw the first pitch for the baseball game. She was dressed as a ghost to simulate a “Ghost vs. Zombie” clash.

The First Pitch stunt was held at QVC Marine Field, home of the Chiba Lotte Marines. The event was broadcasted live on Fox as well as Fox Sports. 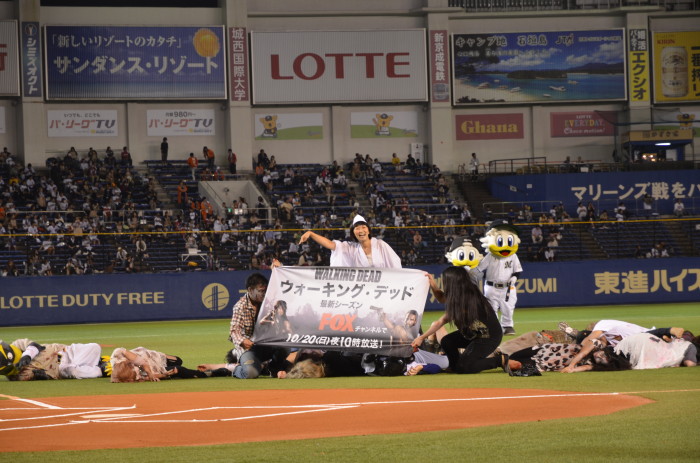 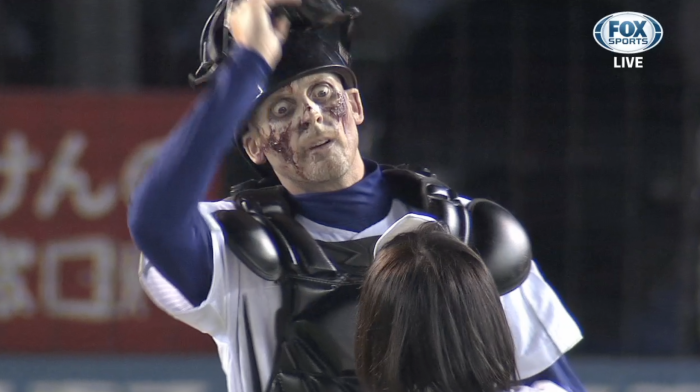 FIC scripted the stunt so that Kawamura, dressed as a traditional Japanese “ghost”, threw the first pitch, but it was missed by the catcher, who then took off his mask to reveal that he was a zombie.

20 more zombies then staggered onto the pitch to fight Emiko Kawamura. She emerged victorious from the zombie horde with a big banner promoting “The Walking Dead”, with telecast details displayed.

For the Tokyo Tower Zombie Invasion, the former Sumo Grand Champion, Akebono, was invited to dress in full zombie attire. Popular female idol singer, Kei Yasuda was also part of the stunt where she was being “attacked” by zombies.

For the crowd of zombies, FIC invited fans of “The Walking Dead” series, celebrities and zombie cosplay-ers to participate in the stunts.  The brand also encouraged them to share their experiences of the events through social media platforms and word-of-mouth.

The aim was to gather more than 1000 people dressed up as zombies at a couple of pre-determined locations. When cued, these zombies would swarm Tokyo's most famous landmark - The Tokyo Tower. FIC featured local celebrities who played the characters of either the “zombie” or the “celebrity victim" in this zombie takeover.

FIC used two special aerial "drone cameras" that hovered above the fray to film angles that showed the scale of this invasion and captured all the action of this activation.

Besides Japan, the zombie stunts were also held in Singapore as well. FIC Singapore set up a Walking Dead Zombie Pop Up Café at SingTel mio TV’s Race The Dead 2013, a zombie-themed marathon from 26-27 October to promote The Walking Dead showing on Fox Movies Premium in Singapore.

The stadium attendance for the First Pitch event reached 10,899 people, with three major media outlets. The event also successfully garnered media exposure on 15 websites and in a sports newspaper.

For both stunts FIC partnered with a local pay TV operator and affiliate, Skapa! to run a The Walking Dead catch-up marathon and promotions that included 10-day free view of the FOX channel and The Walking Dead prize giveaways. This resulted in increasing the monthly new subscriber acquisition by 7.5 times the monthly average.

One of the biggest challenges in organising the event was getting the permission from the Tokyo Tower officials and securing 1,000 characters dressed up zombies to participate in this event, said Dan Smith, executive producer for FIC Japan.

The brand overcame the challenge by working closely with senior FIC Japan management as well as influential business leaders who convinced the Tokyo Tower management to allow FIC the use of the venue to carry out the activation.