Food joint Fish & Co. has changed its terms for an NS50 promotional campaign it launched in June, following public criticism online. The backlash was first received following its posting on 30 June 2017, but came back under the limelight a month later when Fish & Co. started responding to the comments on its Facebook page.

"The change was in response to complaints about the timings of the promotion, which had applied only from Mondays to Thursdays, and up until 5:00pm on Fridays," a Fish & Co. spokesperson said in a statement to Marketing.

In a statement to The Straits Times, a Fish & Co. spokesperson said that the revisions to the promotion were made in response to complaints, some of which accused the food joint of intentionally excluding national servicemen full-time (NSFs) who are only able to book out of their camps on Friday evenings. Marketing has reached out to Fish & Co. for comment.

The spokesperson added that it was never the restaurant’s intention to exclude full time NSFs in their promotion and acknowledged that it was a mistake on the brand’s part. Other than NSFs, the promotion had been planned to include operationally ready national servicemen (NSmen) who are doing their reservist as well as regulars who were better able to take advantage of its weekday discounts.

The most recent revision extends the timing of the promotion to cover all timings and days of the weeks, as well as apply to all 11 Fish & Co. outlets across the island from 2 to 7 August 2017. 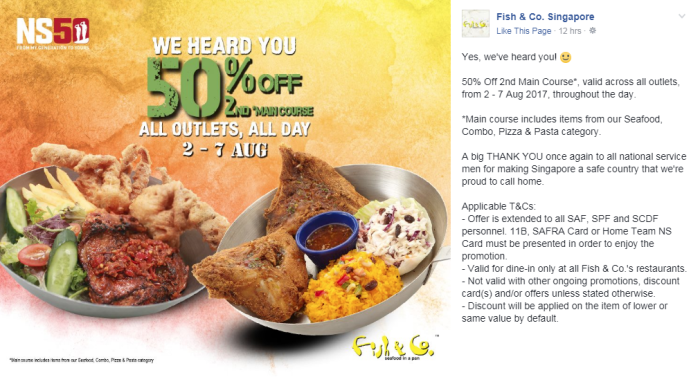