Banking on the K-pop fever, Facebook has launched a new sticker pack together LINE FRIENDS. These “BT21 Best Friends Forever” stickers will be integrated into the Facebook Messenger platform, in line with #NationalBestFriendDay on 8 June. In addition, users on Facebook Messenger will also be able to play around with camera effects and stickers on the platform.

BT21 is a set of animated characters created in collaboration with LINE FRIENDS and BTS, and Facebook jumped on board to integrate the BT21-themed stickers onto its platform. Following the launch of the stickers, netizens on Facebook were seen expressing their “love and excitement” through stickers. There were some who cited these interactive features as a reason to get back on the Facebook Messenger platform.

In a statement to Marketing, Jennifer Whitley – creative director, Messenger Art team said the appeal of the stickers grows in lockstep with the appeal of the band, given that the band is on its world tour currently.

Similar to the previous BT21 sticker packs, the BT21 Best Friend Forever stickers will be available worldwide. Whitley added that the suite of “fun” BT21 camera filters and stickers are released as part of the BFF sticker pack debut.

“Stickers on Messenger remain a beloved feature of our app, with people sending more than 380 million stickers daily. The appetite for more stickers generally, combined with the ever-increasing popularity of BT21, makes for what we hope will be a highly useful, beloved sticker offering,” she said. These stickers will be featured within Messenger’s Sticker store and shared across Twitter, Facebook and Instagram platforms. According to Whitley, the fan sentiments and sticker page usage measures the success of its debut. 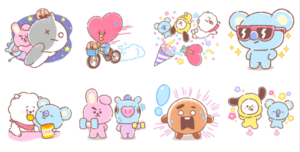 BTS has grown into a global phenomenon, and also made it to the cover of Time magazine. The team of seven gained popularity over the past few years, collaborating with companies such as PUMA, Facebook and Coca-Cola. Recently, Mattel unveiled the line of #BTSxMattel fashion dolls. On the online space, netizens were seen praising and applauding Mattel for its efforts and capturing the hottest K-pop band.

Globe scales back iPhone launch due to Yolanda

Globe Telecoms to use iPhone 5s and 5c launch to beef up its on-going disaster relief operations for super typhoon “Yolanda” vict..

Shoppers will be assigned to one of four tribes – Sea, Mountain, Forest, and Wind. Each shopper profile is tied to a proposed shop..

"It has been gratifying to have led Publicis Media in Malaysia for the past two years. It is time for me to recalibrate my career ..

Commenting on his next move, Fink said he needs a new challenge...

The agency has been working with SMRT on its social command centre since March 2016. ..