Programmatic has been through a pummelling over the past two years. It’s been blamed from everything from the lack of trust in digital advertising to the funding of fake news.

Last year, a number of major brand CMOs went public with their criticism of programmatic, suggesting that brands had lost faith in the potential of automated media buying. Echoing those sentiments, an increasing number of industry pundits have taken shots at programmatic media, questioning whether it’s the right channel to deliver results for brand advertisers.

The truth is that programmatic does come with some risks. The ability to efficiently access inventory on hundreds or thousands of sites offers inherently less control over the final placement than a set of direct deals.

Programmatic enables advertisers to bid for exponentially more impressions than would otherwise be possible. The downside to this expanded opportunity is that some impressions may not be worth paying for. However, the rewards far outweighs the risks, especially if marketers are willing to take steps to limit their exposure to risky, fraudulent or un-viewable impressions. 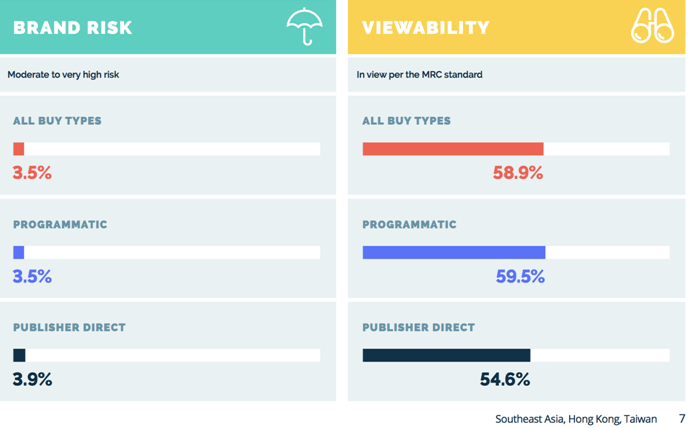 Our H2 2017 Media Quality Report, which analyses media quality both globally and regionally across a number of critical benchmarks, found that overall programmatic media quality was higher than the headlines might lead one to expect.

In terms of viewability, programmatic was a markedly better performer with 59.5% of impressions fully viewable by MRC standards versus just 54.6% for publisher direct buys in the region.

Global brand risk has risen since the first half of 2017, driven largely by an increasingly tumultuous news cycle and spikes in hate speech and violence splashed across the headlines.

In this environment it would be logical to assume that risk levels for SEA, Hong Kong and Taiwan would spike as well, likely with programmatic leading the charge. In fact, the opposite is true.

For SEA, Hong Kong, and Taiwan, programmatic risk is actually lower than the global average. A comparison of overall risk levels in these regions shows brand risk across all buy types, both direct and programmatic is just 3.5%, well below the global benchmark of 7.9% established for H2 2017.

Likewise, while global trends for viewability favour direct buys, in SEA, HK and Taiwan the opposite is true. Average viewability on direct-sold publisher inventory is actually slightly lower than programmatic inventory in the region. Taken together, these facts suggest that programmatic may not deserve it’s somewhat dodgy reputation, particularly in the APAC region.

At IAS, we see more than seven billion impressions each day, more than any other verification provider. This unique vantage point gives us an equally unique perspective on the digital ecosystem.

We use all of that information to enable buyers to make informed decisions about which impressions to bid on and which ones to avoid. The data sits on the DSP platform and is used for targeting and optimising campaign performance. This scale is one reason that we see improved media quality scores via programmatic buys with SEA, HK and Taiwan.

Some experts have called for a complete overhaul of the programmatic ecosystem. They cite assumptions about the challenge of programmatic inventory quality that are increasingly not grounded in reality.

While programmatic does present a unique set of challenges for media buyers, the data we’ve collected through our H2 2017 Media Quality Report suggests the reports of programmatic’s demise have been greatly exaggerated.

Thanks to the availability of DPS tools that allow buyers to target brand safe pages, human impressions and viewability inventory, the quality challenges that once plagued programmatic are being brought to heel.

Furthermore, in regions such as SEA, HK and Taiwan programmatic buyers are actually healthier than many of their direct sold counterparts.

Challenges with programmatic will persist, but it seems clear that with the right tools and the right bidding strategy, risk can be mitigated and media quality across programmatic buys dramatically improved.