TBWA\Group Malaysia's chief creative officer, Sa'ad Hussein shares with us his proudest moment and the one person he looks up to.

Aside from holding his creative role, Hussein has the relatively rare experience of previously leading agencies as well, having held the role of managing director for Sil Ad Malaysia, and later Creative Juice\Sil. Here's the man behind the work:

During my university days I was always tasked to create the varsity event logos, brochures and T-shirt designs. A friend of mine, who owned a small agency, liked my designs and offered me freelance projects. I gave up my Economics degree (don’t worry, I did graduate with a Bachelor’s degree) and pursued my newfound love.

I just get away – for a drive, bus ride, to the gym – and not think of work. Ideas will come when you’re not thinking about it. Besides, it’s good to go out and observe life and the little stories that unfold before your very eyes.

To stay creative. And it’s getting tougher; nowadays everybody thinks they are creative and assumes ideas are easy to come by.

When my mum finally understood what I’ve been doing for the last 20 years. One day she held up a news clipping of an interview I did in the local newspaper. She looked at me proudly and said, “You must be a very creative person.” 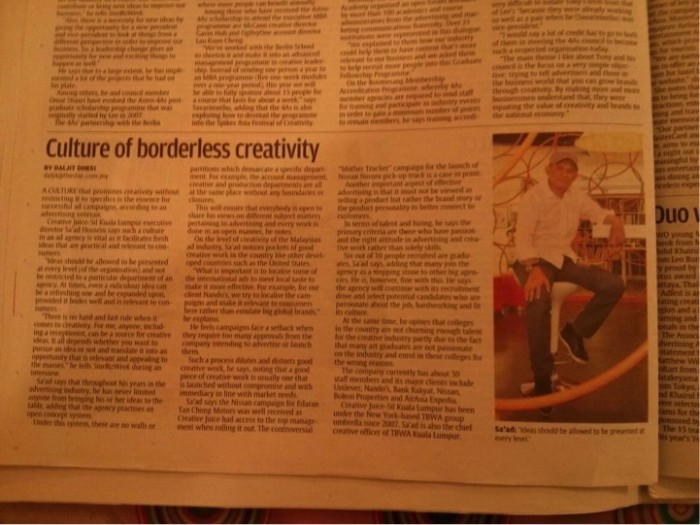 It was literally a typo mistake on a headline of a full-page ad. And worse, there were no pictures; just the headline. It was early in my career. I didn’t lose my job and we didn’t lose the client; but my copywriter and I had to pay for the replacement ad.

I was really lucky to have worked briefly with Looi Boon Beng who once helmed BBDO. He was one of the successful local ECDs in Singapore (during the Neil French era) creating iconic work and winning a lot of awards. Besides his creative influence, I was inspired by his business acumen as exemplified by the successes of Spencer and Monsoon, which were eventually sold off to BBDO and Lowe, respectively.

“I do not want her on my account. She’s fat and ugly.”

“You're sure you went to university?”

I don’t usually react and say nasty things. Sometimes my silence can be harsh to many.

I don’t believe in dream brands. But I love to work on challenger brands and make them dream brands for others.

Travelling from Singapore to Kuala Lumpur every week for the last 15 years. I’m in Singapore for most weekends to be with my family. Actually, it sounds more crazy than weird.

One compromises, the other doesn’t.

I would have been an architect or an IT guy. I don’t think I can be a strict 9-5 kind of guy.

I will hit the courts and have a game of squash on Saturday mornings. I need my weekly adrenaline and sweat sessions to clear away the toxins and stress. Since I’m away for most of the week, I do spend quality time with my wife and kids. That’s even more therapeutic.