The Coca-Cola Company has launched its own font known as TCCC Unity.

According to the comapny's VP of global design, James Sommerville the new font encapsulates elements from the company's past and its American Modernist heritage. Revealing the news on Instagram, the post also showcased different versions of TCCC Unity, including the light, bold and condensed versions. 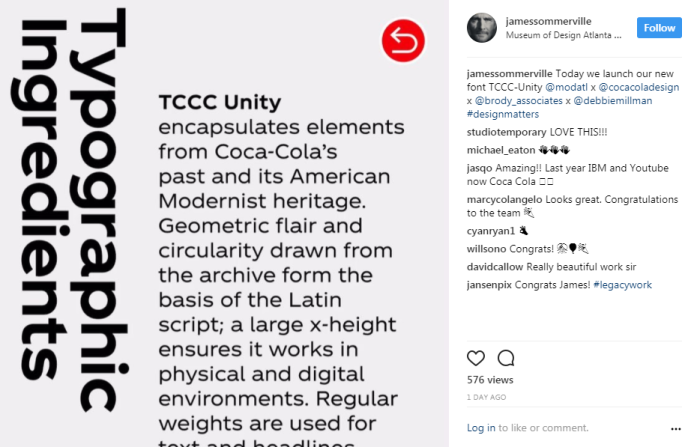 Marketing has reached out to Coca-Cola for comment. Among the list of brands that have also created their own font include Intel, Nokia and General Electric.

The launch of the new font comes after the company unveiled its global "One Brand" strategy in Singapore and Malaysia last April. For the first time ever, the entire Coke range in the region will be marketed under one brand design, unifying all of Coca-Cola’s varieties under the one design using the iconic Red Disc.

Last August, the company worked with one of Malaysia’s top artists Reggie Lee to launch a set of “The Merdeka” limited edition cans in commemorating the country’s 60 years of independence. Coca-Cola also collaborated with Chinese singer Lu Han and McCann Worldgroup Shanghai in June 2017, to release a new label design for its annual "Share a Coke" summer campaign.