Cathay Pacific has unveiled one of its biggest integrated initiatives yet, under a new concept that aims to set a refreshed tone for the Hong Kong airline.

Called 'Life Well Travelled', the initiative launched last night and is believed to be more than 1.5 years in the making by Cathay Pacific's creative agency McCann Worldgroup Hong Kong. It is the largest brand initiative since the launch of Meet the Team back in 2011.

At the core of the concept is a content hub which pulls together images and stories from its own staff, some of its most frequent travelers and key social media influences including Jessica Stein and former Hong Kong resident Tyson Wheatley. 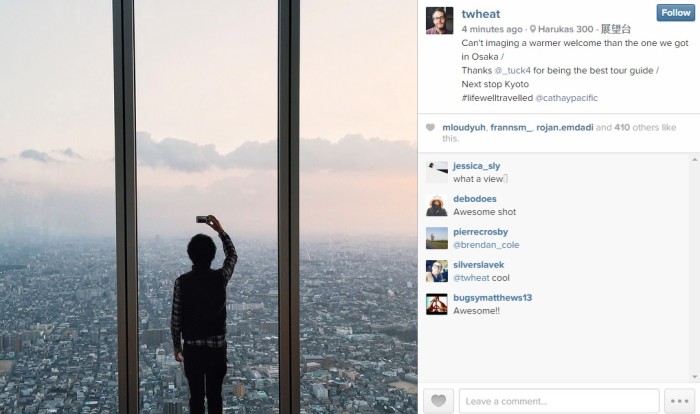 A series of TV executions are now live on YouTube and TV, in addition to content partnership deals with global news sites BBC World and New York Times. Print and outdoor executions are expected to follow the launch of the TV spots.

"We believe that travelling well is an important part of living well," the airline said on its newly launched brand site.

"That’s why we continually strive to enhance the overall travel experience. Because when you travel well, your trip can become more memorable, more meaningful, more rewarding."

The new campaign and tagline comes just months after Cathay unveiled a revamped logo, its first cosmetic change in 20 years.

Pushkar Sane, co-founder and CEO of Convergination and former chief digital officer at Starcom MediaVest Group, features prominently in the campaign speaking about his motivations and passion for travel.

“Travelling well means keeping fit. No matter how good the catering services are it’s not fresh food, there’s no real air on board. And the time differences can have an effect on your body, especially if you’re working.

"Not everything goes perfectly on a plane, and it’s not about the issue itself but the admission that there was one in the first place and informing the company. Someone making an effort is good enough."