Earlier this week, Marketing reported news that senior vice president sales and marketing at Singapore Airlines (SIA) Group, Campbell Wilson has been reinstated as CEO of SIA’s fully-owned subsidiary Scoot. The news clearly resonated with our readers (as seen on our analytics dashboard) given Wilson previously held the role of CEO of Scoot from 2012 to 2016 and essentially grew the brand's prominence.

In his time with Scoot, Wilson was often lauded for his out-of-the-box ideas and often being part of the marketing team's quirky campaigns. In 2015, Wilson released a Facebook video as a cheeky response to address US airlines Spirit who had been using logo and marketing collateral similar to Scoot's. Under Wilson's leadership, Scoot was also named Marketer of the Year for three consecutive years at Marketing's Marketing Excellence Awards in 2014, 2015, and 2016. 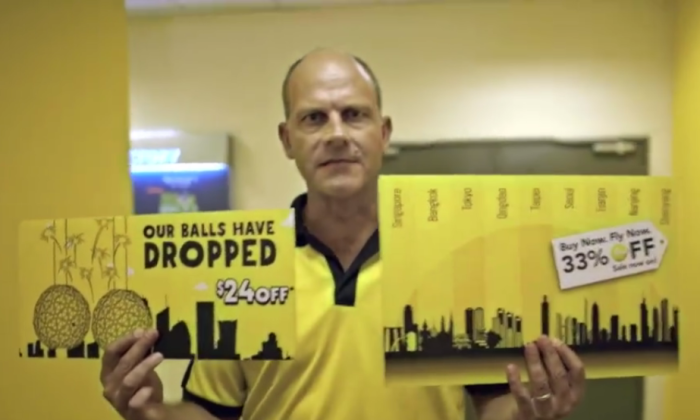 Wilson very famously fronted the "Scootitude" persona, with his name being seen as synonymous with Scoot’s.  In fact, in 2014, when the former marketing lead of the company left, she thanked Wilson personally in a heartfelt blogpost for supporting the marketing teams’ daring and often cheeky vision. Agency partners during the period he led Scoot also raved about Wilson’s leadership style.

In fact when the news of SIA’s new airline broke in 2011, agencies flocked to the pitch with the pitch having more than 30 agencies at one point. In a 2012 interview with Marketing, Wilson who was neck-deep in the marketing and pitching process the brand had just undergone, said he wants to work with people  who, once they have an understanding of what the brand is, go ahead and run, came the reply.

“We don’t have time for countless refinements, we need people who come to us, make a little change and that’s done. And that should be able to be propagated to the world, so preferably a network agency or one that has partnerships to do this. And we don’t want an agency who always agrees with you. Ultimately we’re the client, but don’t just agree with everything we say," he said.

Today, CEOs are often getting more and more involved with a brand's marketing and persona presented to audiences and partners. 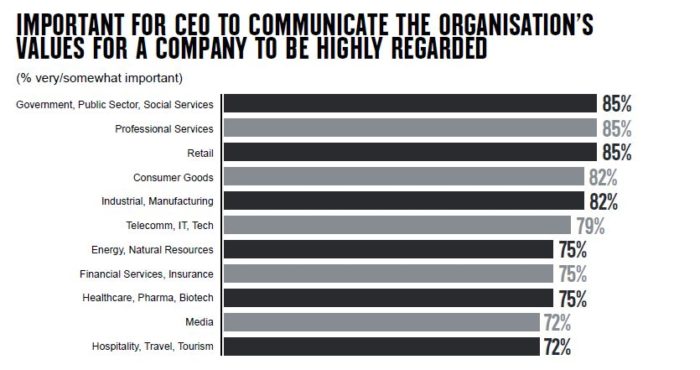 Why it helps when a CEO is well-versed in marketing

Marcus Chew, CMO of NTUC Income, said having a "marketer" CEO helps a brand be conceptually strong where he/she will have the ability to makes sense of the creative concept without needing to see the final product, saving time and resources, which also allows consistency of the brand’s tonality.

"If the CEO comes through as a recent CMO [or with a strong sense of marketing], he/she will have added strengths in the ever-changing digital marketing tools and tactics, using these tools to drive revenue as an edge over traditional CEO," he said. He added that at the end of the day a CEO who understands marketing will understand the marketing team will require the assistance of the entire organisation from IT, sales, operations, and others  to deliver the brand promise and not just advertising.

Adding on to the conversation, R3’s co-founder and principal Shufen Goh said that having a CEO who understands marketing will allow for the company to be more obsessed with customer perception and experience, and reorganise the company structure and resources around making marketing more accountable for business. She added that having a CEO with a strong understand of marketing also allows for the debunking of the myth that marketing is half art and half science. "With the technology available to marketers these days, more can be measured and refined than ever before," she said, adding:

In many companies that do not have a strong marketing culture, the role of marketing and it’s impact on business is not well understood. It’s still seen as an expense rather than investment.

Rebecca Ang Lee, CMO, MSIG Asia also seconded Goh’s statement:"A CEO who understands marketing will recognise its value as an investment, not a cost, as it fuels the growth of both business and brand."

She added that marketing is a disciplined approach where companies need to be consistent and authentic with what the brand says and does to keep customers engaged in a dynamic environment today.

Staying relevant will bring about customers’ preference and loyalty amidst competition, which in turn will lead to business revenue and market share. This does not happen overnight. It takes years, and certainly a CEO who appreciates the business value of marketing will build a strong and lasting brand.

Shreyas Subbaraya, marketing director of Equal, Asia Pacific, added that having a CEO who understands marketing puts the consumer at the front of center to fuel long term growth. The focus naturally becomes about growing penetration, innovation, and building iconic brands that win consumers' hearts and minds.

Other notable traits that execs expect from CEOs

Meanwhile, the Weber Shandwick's reputation study also found that executives in the 76 Percenters (which are executives who attribute more than three-quarters of a company's market value to its reputation) are more likely report that their senior leadership measures or monitors the company’s reputation. Among these 76 Percenters, it is revealed that the top factors that CEOs use to measure its company reputation are employee satisfaction or engagement, sales or financial performance, stakeholder surveys, and online customer ratings and reviews. 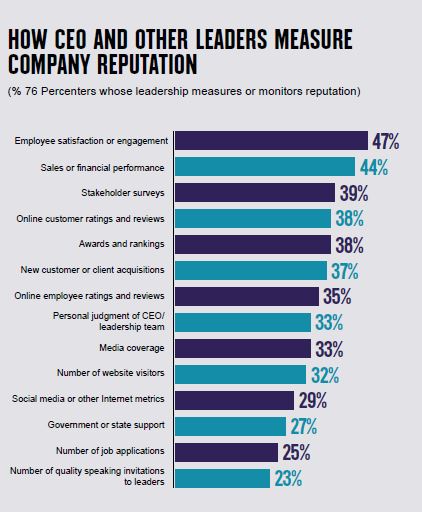 Overall, the study finds that there is a lot of importance of leadership visibility activities to strengthen the company's reputation. Among seven factors, the most important thing for CEOs to do is to communicate the organisation's values, followed by enabling senior leadership other than the top leaders to be visible in news media and industry events. It is also crucial for CEOs to share new insights and trends with the public to boost its company's reputation. 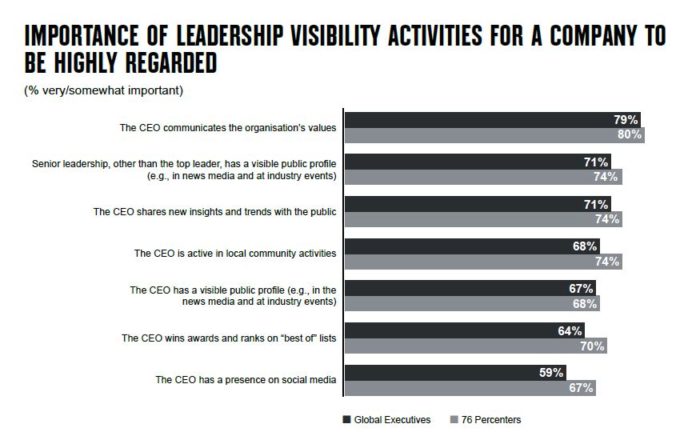