Cadbury has created a print ad, running it in major newspapers such as the Malay Mail, hoping to clear the air and assure customers that it is safe to consume its products.

The confectionery giant also thanked its consumers for believing in the brand despite the recent happenings.

Two of its chocolates, Cadbury Dairy Milk Hazelnut and Cadbury Dairy Milk Roast Almond, were initially tested positive with traces of porcine-DNA last week, causing a massive scandal for the confectionery maker. It was cleared of the accusation after a second test was carried out. 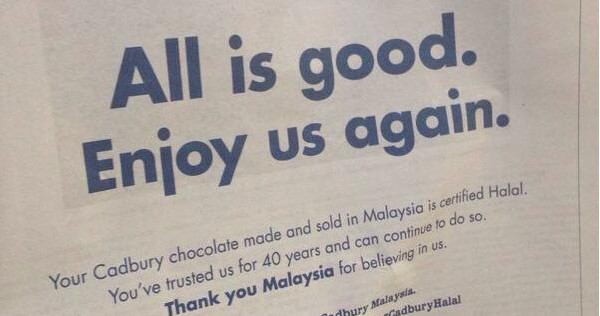 Why your unhappy employee will hurt your brand

Toggle has assumed full responsibility for the video and taken down the video featuring influencer Saffron Sharpe...

He first joined MDEC in 2019 as senior advisor, communications and marketing...

"Pon has been a prominent female role model not only to the staff in BBH China but across the BBH offices worldwide."..

Toughest thing about this job? Getting the best out of the team while remaining authentic and motivating at the same time. ..