Winter has come. In the weeks leading up to the new season premiere of popular HBO TV series Game of Thrones (GoT), brands are putting their creative hats on by leveraging on the show to engage consumers through the launch of out-of-home (OOH) activations and online advertisements. Some even went as far as to plan a bakery launch and a class for "High Valyrian", a language specially created for the TV show!

Here are some marketing initiatives by local and global brands which we spotted.

StarHub encourages fans to put their knowledge to the test this weekend by heading down to the Game of Thrones supply store at VivoCity East Court. Fans who successfully answer a trivia question - without assistance from Google, of course - will win a Stark, Lannister or Targaryen supplies pack.

Those eager to arm themselves with a "weapon" can step up to the challenge and answer a trivia question posed by the "blacksmith". A correct answer will earn fans a life-sized replica of items used in the TV series such as Oathkeeper, Longclaw Sword and dragon eggs. The telco also organised a Facebook contest for HBO subscribers, offering them an opportunity to win tickets to an exclusive screening of the first episode next Monday. 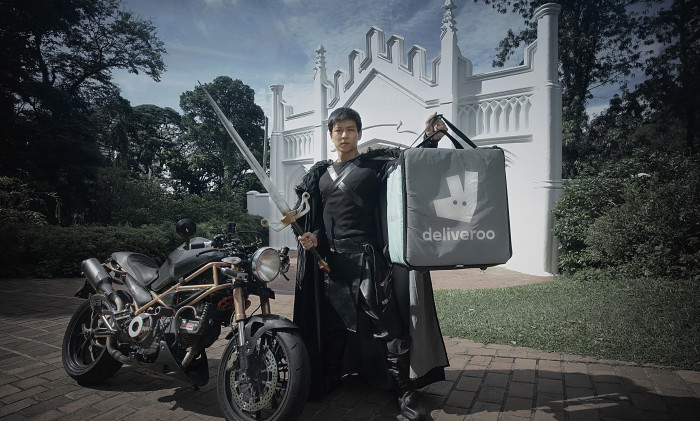 Deliveroo Singapore has teamed up with over 12 restaurants including Chicken Up, Outback Steakhouse, Manhattan Pizza, Cedele, 4Fingers, Pasta King and Watami for a special edition "Feast for a King" menu. The restaurants have created dishes inspired by the iconic scenes and characters set to appear in the latest season.

The names of the dishes also made reference to the show, such as"Theon Greyjoy Sausage Roll", "Joffrey's Wedding Slice","Drogon's Breath", "Little Finger's Big Fingers" and "The Hound's Chicken Dinner". All are available to order until 9 August. 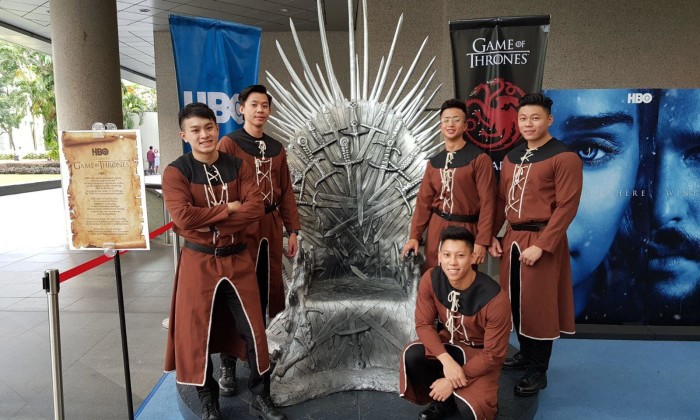 It comes as no surprise that HBO is pulling out all the stunts for the show.

Singapore fans will be given photo opportunities with a life-sized ice sculpture of the Iron Throne and the legendary Iron Throne itself on 15 July and 16 July respectively, as well as with some of the TV series' iconic characters at Orchard Cineleisure. They will also stand a chance to retrieve limited edition premiums frozen in blocks of ice and receive Game of Thrones airbrush tattoos. A similar OOH activation was carried out at Raffles Place on 29 and 30 June.

Meanwhile, from 29 to 30 July, fans in Hong Kong will receive a free, limited-edition Night King frozen yoghurt by liking the HBO Asia Facebook Page or following its Instagram account, as well as tagging their pictures with the #GOTS7HK hashtag. HBO Asia partnered with frozen yoghurt outlet Yo Mama for this on ground activation, and only 1,000 cups of yoghurt will be given out.

Earlier this month, HBO Asia also teamed up with Taiwanese ice dessert outlet, Ice Monster, to produce limited-edition Night King popsicles. Each day for over two weekends, 100 popsicles were given out to fans who uploaded a photo of the "white walker" standing at the shop front on Facebook on Instagram, with the #GoTS7TW hashtag. Ice Monster was also transformed into a Game of Thrones-themed ice dessert outlet for almost three weeks.

Hands up if you wish to command dragons like Khaleesi, speak like a Targaryen or say more than just "Valar morghulis" or "Valar dohaeris"! Popular language learning app Duolingo has launched a web-based High Valyrian language course, with 2,020 learners at the time of writing. The course is taught by David J. Peterson, a linguist and the creator of High Valyrian. According to Quartz, Android and iOS versions will be available soon.

Northern Irish actor Kristian Nairn, better known to fans as Hodor, plays a cashier in KFC's latest spot. As soon as the clock strikes 12, a horde of customers come storming into the restaurant like a hungry mob of zombies. "Chicken with fries!" one shouted, followed by another, then three and four more customers, with the orchestral music in the background intensifying. Soon, everyone is shouting "chicken with fries", causing Nairn to panic.

He then turns his back and anxiously chants "chicken with rice" while the customers behind reach out to him, mirroring the scene from Game of Thrones where the white walkers - also known as flesh-eating zombies - were clawing at him from behind as he held the door. Gradually, he hears the words morphing to, like an epiphany, "chicken with rice".

But really, which Game of Thrones fan could ever forget this heart-wrenching scene? 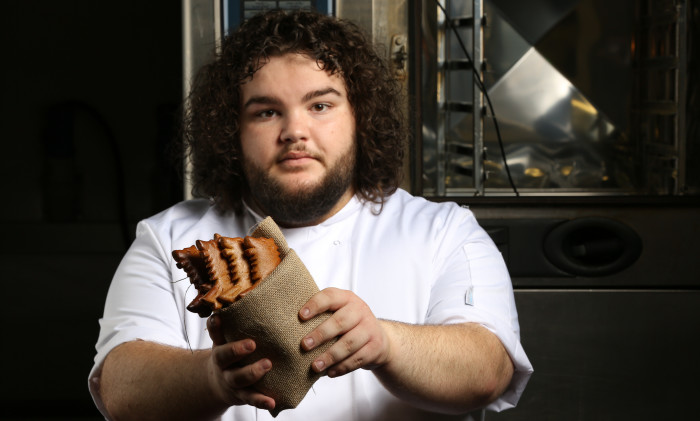 Deliveroo UK and actor Ben Hawkey, who plays Hot Pie in the TV series, have collaborated for a Game of Thrones-inspired bakery launch on 17 July to coincide with the new season premiere. Hawkey will serve real-life versions of the "direwolf bread" he famously baked on the show, at the new bakery known as "You Know Nothing Jon Dough". The "Jon Dough" loaves are made from whole wheat cornbread with orange zest, best served slightly warm with soft butter.

Industry experts Marketing spoke to said while riding on trends might help brands maintain relevancy, it is also important to know the trend at the back of one's hand and ensure there is a relevant reason for brands to jump on it.

Kristian Olsen, founder and managing director, Type A Digital, said it is important for marketers to know a trend inside out and ensure all facts are accurate. This also applies to any "trivia" that brands aim to use as a lead in. "Remember, people who are following these trends closely, be it a show or an event, will be very quick to point out any flaws in your delivery and you end up making the news for the wrong reasons," Olsen said.

The last thing you want is an audience telling you that 'You know nothing Jon Snow'.

"It can look cheesy, especially if parlayed with tacky humour and low production values that distort the whole premise of the original idea. You must also take into account if it might be cost prohibitive for a small target audience. Lastly, the alignment between the product/service with the original trend needs to be very organic, preferably an extension of the theme - like what KFC did with Game of Thrones," Olsen said.

However, when done right, brands can reap benefits by riding on a trend. Olsen said if what a brand does is remarkable, it will get a lot of traction and positive awareness about the brand. Not only will it be put in audience's spotlight, but also prompts consumers to "give [them] a go" if they have yet to do so. He also said that such a move by brands will also allow consumers to view them as more approachable.

"You usually get to show your brand in a more lighthearted way, something that most brands don't get leeway to do with their usual communications," Olsen added. "Sometimes slapstick works. The good part is that online people love humour, wit and the smarts of jumping on the bandwagon sort of initiatives."

David Haddad, managing director, IPG Mediabrands Singapore, said aligning with a trend is a great way for brands to leverage the hype surrounding that trend at a particular point in time. He added that marketers always need to evaluate if there is a relevant reason for their brand to be involved with a trend, other than wanting to leverage the noise for the sake of it.

Consumers can sniff out a 'jumping on the bandwagon' scenario from a mile away.

While brands can be seen as agile and relevant by leveraging a trend and producing communications that understand and celebrate the now, there is also a risk of them getting lost in the hype surrounding the trend, Haddad explained. He also added that if the trend takes a sudden negative turn in culture, brands riding on the trend might be associated with the negativity.

Allison Coley, managing director, MEC Singapore and Global Solutions Asia Pacific, said while leveraging consumer or culture trends in marketing is not new, trends come and go at a faster pace than before in today's digital world.

"Riding the wave of pop culture can shift brand perception faster and at a much lower cost than a traditional marketing campaign. In order for brands to successfully do this, they must be really tuned in and activate at precisely the right moment; too early and the impact will be lost, and too late, the brand will appear dated," she added.

According to Sarah Ann Musgrave, head of strategy, MEC Singapore and Global Solutions Asia Pacific, finding the content that operates as the cultural "connective tissue" between people with scale and deep affinity is rare. Hence, she advises brands to "strike while the iron is hot" so they can remain relevant without straying too much from their own equity.

Spot any Game of Thrones marketing initiatives? Share them with us!

Study: Hongkongers will think twice before spending money after the pandmic