To engage Ben & Jerry’s fans as well by introduce exclusive US flavours.

ChunkFest is an annual ice cream festival. This year, the brand was looking to launch a new flavour in Singapore – Couch Potato, a concoction of fudge coated potato chips and salted caramel swirls.

ChunkFest 2013 adopted the tagline of “A little weird and A LOT fantastic” to celebrate Ben & Jerry’s culture of innovative flavours and ice cream combinations. This year, a total of 18 flavours were made available to the fans with 13 exclusive US flavours flown for the day.

A free-for-all event, the ChunkFest 20113 had a media/blogger preview one hour before the festival grounds were opened to the public.

The brand also extended e-invitations to more than 50 media and bloggers while the public was informed of ChunkFest through a combination of PR and social media outreach such as events listing and publicity on owned platforms such as Ben & Jerry’s Singapore Facebook page.

Ben & Jerry’s also held an open air MOO-vie screening at ChunkFest. The choice of movie ‘Charlie and the Chocolate Factory’ was fan-voted via Ben & Jerry’s Facebook page, adding on to the theme of the festival.

Other highlights include the annual Vermonster Challenge, where teams of four compete to finish a giant sundae (consisting of 20 scoops of ice cream, complete with toppings and whipped cream) in the fastest time possible to walk away with the grand prize of one year supply of Ben & Jerry’s ice cream.

A central element to all ChunkFests has been the promotion of social causes at the event. Five partners were invited to champion their causes at the festival this year. They included Blessings in A Bag, Dyslexia Association of Singapore and Project Happy Feet, Kerbside Gourmet and Chris’ Café @ The Hub. From selling merchandise, delicious gourmet food and coffee and organising fun games, the Fairness Partners were able to leverage ChunkFest as a platform to raise awareness and funds for their causes. 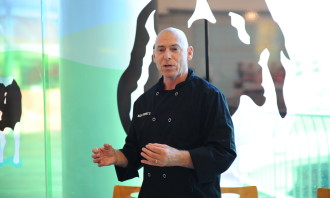 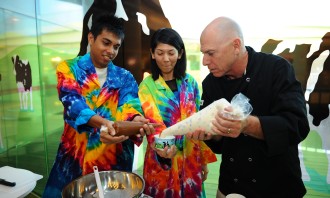 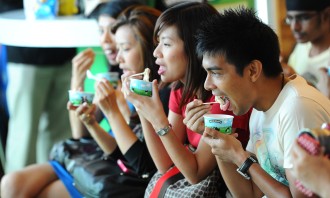 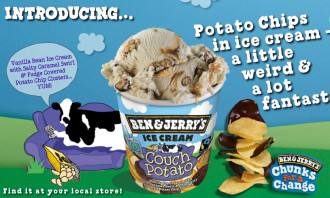 The event saw close to 60 guests (including their plus ones) attending the hosted preview of ChunkFest.

The event reached out to a total of 957,956 people through social media channels as well. The posts related to ChunkFest received 1.4 million impressions from both fans of the Ben & Jerry’s page and non-fans as well. This was in part boosted by paid media on Facebook.

On Twitter alone, there were a total of 652 tweets that mentioned ChunkFest 2013 within the last month, which generated approximately 868,932 impressions around the event.

On Instagram, there were a total of 526 Instagram posts that incorporated the official hashtag #couchpotatosg that was promoted at the event ground, as well as hashtags organically referencing ChunkFest. These collectively received 50,216 Likes and 876 comments during the campaign period.

Ben & Jerry’s also saw a 20% increase in revenue this year as compared to last year. The increase spans across the consumption of ice cream, carnival games and fairness partners booths.

The event was also featured on Power 98, Her World Plus, Insing.com, 8 Days, Timeout, Lianhe Zaobao and The Straits Times.

One of the biggest challenges in organising the event was the weather.

The brand kept the event as a rain or shine outdoor event to maintain the ice cream festival atmosphere.

“In case of heavy downpour, we had prepared platforms to lay on some part of the grounds. This year we also gave out Ben & Jerry’s slippers as goodwill for ChunkFest goers to keep their shoes nice and dry. We are glad that people streamed in throughout the day,” Jenalyn Liu, brand champion, Ben & Jerry’s, Singapore said.

For future events, the brand will conduct participants’ survey for ChunkFest annually to help Ben & Jerry’s find out what went well and what the areas of improvement are.

“Based on this year’s survey results, we will make improvements and keep elements that went really well for next year’s ChunkFest,” Liu said.

The festival will run until 24 February 2019, featuring 18 creative light art installations, an enhanced version of A Symphony of ..

"Companies sometimes are operating as if customer data was their own information. It is time to have a win-win relationship for pe..

Struggles of independence: How Singapore’s hot shops do it

"If you have 400 employees, one lazy bullshitter isn’t about to rock the boat at all." Founders of GoodStuph, Rice Comms and TSLA ..

Ecolab hands Hoffman its PR and comms account in China

The firm will be tasked with providing strategic communications consultancy services and PR support in a bid to further enhance an..