A total of 126 awards were given in the award’s 9th season – 61 bronzes, 52 silvers and 12 golds and  only two platinums. The Advertising Foundation of the Philippines, the award’s organizer, gathered 387 entries, the highest number since AVA was created in 1998

BBDO Guerrero brought home platinum in advocacy communications for the “PH Thank You” campaign developed for the Department of Tourism. It was launched this February, three months after Typhoon Yolanda swept the Philippines to show gratitude to the global aid given to those hardest hit.

ALSO READ: PH says thank you to the world for Haiyan aid

GMA Marketing’s four-part short film “Gustin” won a platinum in branded communications. The series was created for Champion Detergent, following the story of two trash pickers divided on what to do with a bag of money they found. Dragon Pineda directed the series and was aired on GMA and GMA news TV from 24 September to 21 October.

GMA Marketing bagged nine awards in total, with seven bronzes and one gold. 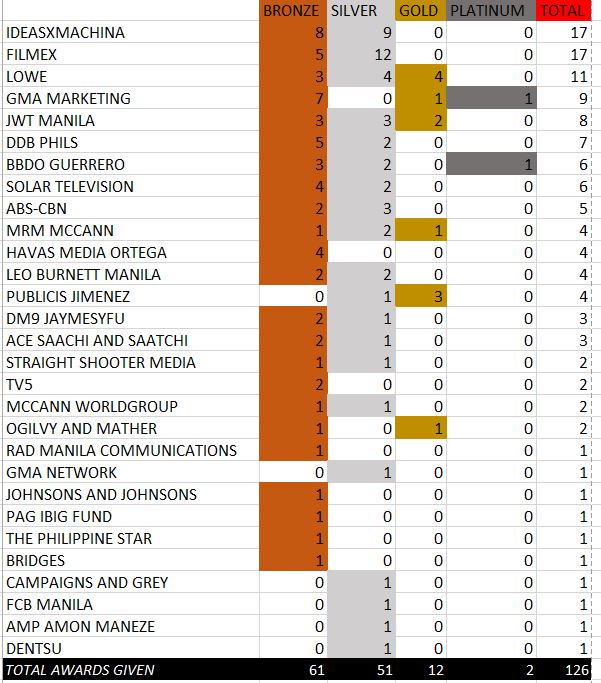 “This is not purely a commercial endeavor, brands are starting to become more responsible. They are starting to think about their participation in community building and their responsibilities towards the environment and sustainability,” he adds.

This is in a bid to help advertisers drive incremental in-store visits...

Ting will report directly to Dominic Powers, CEO of CtrlShift...

Ray-Ban has teamed up with Rice 5 for a brand platform #Campaign4Change that aims to inspire and encourage people to change the wa..

Does the Jobs Bank mean trouble for the digital industry?

In an industry that often bemoans a shortage of employable talent, the launch of the National Jobs Bank has sparked fears amongst ..

“One of the most challenging parts of the campaign was getting all the elements to sync together.”..