Brands in Asia are the indeed growing fast.

According to the 10th annual Brown BrandZ Most Valuable Global Brands, growth in the region was led by tech and retail brands.

Asia’s number one brand was Tencent, which recorded growth of 43% at US$76.6billion to make it the 11th most valuable brand globally. The company has benefited from strong ad revenue across its social networks, with video advertising particularly strong, and has also invested in expanding its eCommerce presence in China.

Alibaba took the second spot in the Asian chart following its recent IPO - with a value of US$66.4billion. It has also overtaken Amazon as the world’s most valuable retail brand.

Chinese brands dominate the listing, taking eight positions in the top 10, challenged only by Toyota from Japan at number six – valued at US$28.9 billion – and Samsung at no.8 – valued at US$21.6 billion. 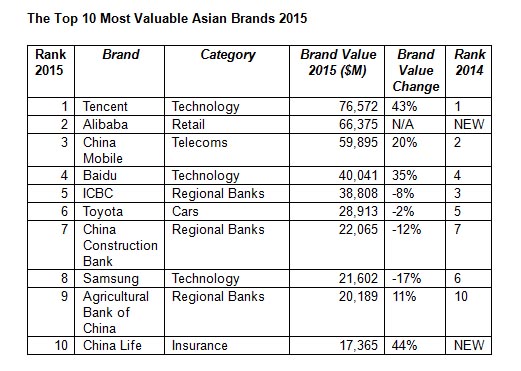 “Asian brands and Chinese brands in particular are performing well, led by strong growth from the technology and retail sector. In Tencent, Alibaba, Huawei and Baidu, the region has brands with potential to grow into global champions,” said Adrian Gonzalez, chief executive for Millward Brown in Africa, Middle-East and Asia-Pacific.

“The size of the Chinese market has also helped its banks and insurance companies build a strong presence in the Asian top 10, and China Life was the star performer in these sectors.” 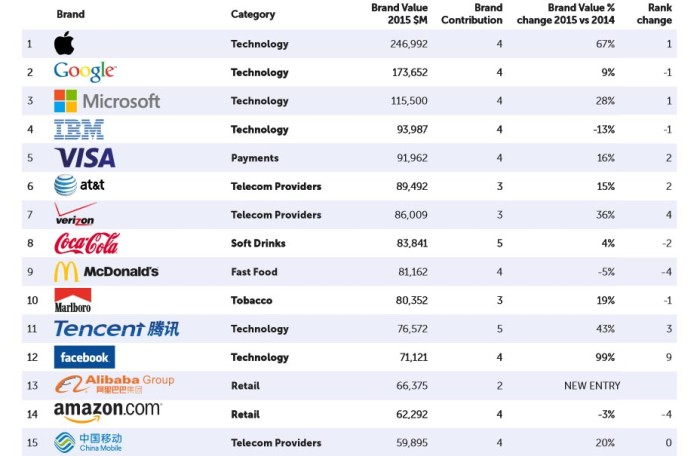 New entrants to the Global Top 100 from Asia included telecoms brand Huawei, which took the number 70 spot with a valuation of US$15.3 billion and China Telecom at Number 99 on the basis of a US$11.0 billion valuation.

The report added that Chinese brands are predominantly earning their place in the Top 100 at the expense of those from Europe. The country has grown its presence in the Global Top 100 to 14 brands, up from just one in the first BrandZ listing in 2006 and the value of Chinese brands in the listing has increased by 1004% over the decade, compared to an increase of just 31% for European brands over the same period.

Nonetheless, despite this success against Europe, the report states that Asia’s leading brands still have a long way to go to catch the world’s leading brand Apple, which retook the number one spot from Google on the back of a 67% gain and a valuation of US$247 billion. 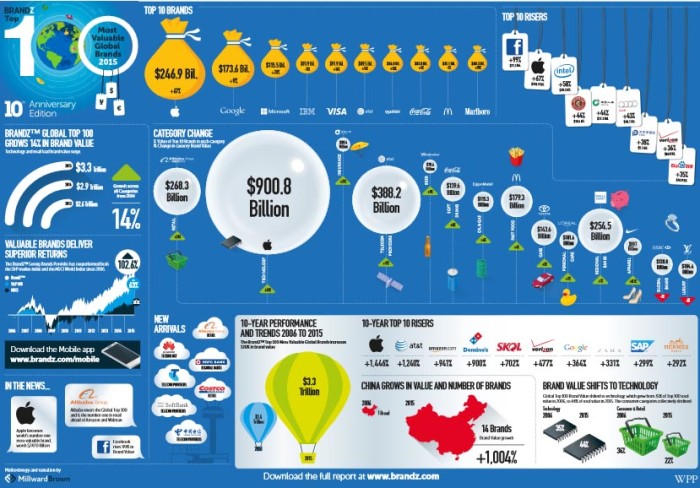 Carried out by WPP's marketing and brand consultancy Millward Brown, the BrandZ Top 100 Most Valuable Global Brands study is the only ranking that uses the views of potential and current buyers of a brand, alongside financial data, to calculate brand value.