Potentially 65,009 users in Singapore are at risk of having their information improperly shared with Cambridge Analytica, following the recent scandal blow up. This was revealed by Facebook, which also confirmed that 1,096,666 accounts in Indonesia were at risk as well. Indonesia is the third most affected country, and the government has said that it has no qualms banning the social media channel.

The social media giant confirmed to Marketing that Malaysia numbers are currently unavailable. 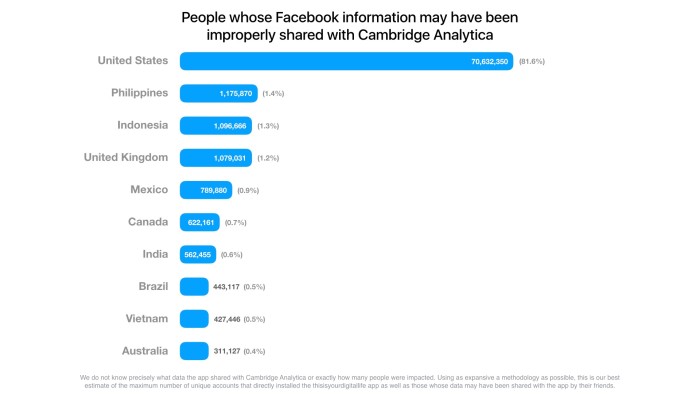 Meanwhile, Facebook added that information of up to 87 million people — mostly in the US — may have been improperly shared with Cambridge Analytica.

For Pages API, until today, any app could use the Pages API to read posts or comments from any Page. This let developers create tools for Page owners to help them do things like schedule posts and reply to comments or messages. But it also let apps access more data than necessary. We want to make sure Page information is only available to apps providing useful services to our community.

Starting today, all future access to the Pages API will need to be approved by Facebook. Before, any app could use the Pages API to read posts or comments from any Page. This allowed developers create tools for Page owners to aid them in moderation, while also allowing apps to access more data than necessary.

For Events API, apps using the function will no longer be able to access the guest list or posts on the event wall. In the future, only Facebook-approved apps that agree to strict requirements will be allowed to use the Events API. Before, users could grant an app permission to get information about events they host or attend, including private events.

All third-party apps using the Groups API will now need approval from Facebook and an admin to ensure they benefit the group. Apps will no longer be able to access the member list of a group. Facebook will also remove personal information, such as names and profile photos, attached to posts or comments that approved apps can access.

Meanwhile Facebook will be accelerating the deprecation of Instagram API Platform, disabling all remaining capabilities to read public media on a user's behalf and reading a user’s own profile info and media.

Facebook will also require approval for all apps that request access to information such as check-ins, likes, photos, posts, videos, events and groups. Tightening its review process, it will no longer allow apps to ask for access to personal information such as religious or political views, relationship status and details, custom friends lists, and more.

It has also revealed plans plans to shut down Partner Categories, a product that lets third-party data providers offer their targeting directly on Facebook.

For app controls, starting 9 April 2018, Facebook will show users a link at the top of their News Feed to view what apps they use — and the information they have shared with those apps. People will also be able to remove apps that they no longer want. As part of this process, Facebook will also tell users if their information may have been improperly shared with Cambridge Analytica, the blog post read.

“Overall, we believe these changes will better protect people’s information while still enabling developers to create useful experiences. We know we have more work to do — and we’ll keep you updated as we make more changes,” Schroepfer said.