The latest admanGo report revealed that Expedia, Inc was the top advertiser group in 2017.

The quarterly report calculated the advertising spending based on the rate cards provided by media owners, and claimed to have taken into consideration the discount factor based on an assumption of 60% off the standard rate.

The numbers saw Expedia.com.hk spending most in advertising last year. It recorded a 150% YOY growth in mobile adspend, and its overall adspend accounted for 14% of the adspend in Travel Agents.

The mobile spend by Trivago, a subsidiary of Expedia, was 5 times greater than the previous year. Trivago was the top advertiser in travel guide, and its overall adspend accounted for 87% of the category. Apart from advertising in Mobile ads, Trivago also marked a 55% YOY increase in TV.

Kuoni Travel also strengthened its advertising via mobile ads and its spending in mobile ads was also 5 times more than the previous year.

On the other hand, GSK slipped from the number two spot from the last quarter to be the third biggest advertising group, while P&G climbed one spot to be the second. 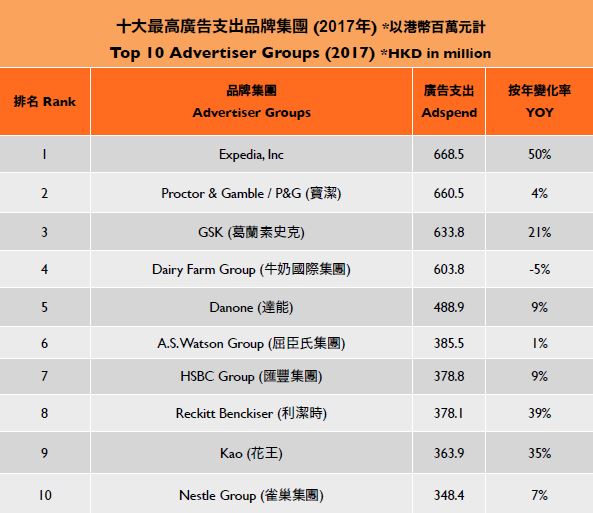 HSBC Premier MasterCard was the top spender with a triple growth in adspend and accounted for 10% of the overall mobile adspend in the category, while MasterCard Credit Cards recorded a drastic boost in mobile adspend and ranked second. The Visa Platinum Card and Gold Visa Card by HSBC followed with a 159% and 239% YOY increase respectively.

There was a 179% YOY increase in mobile adspend by jewellery, watches & luxury products, and the top sub-categories watch & clock and jewellery saw a 112% and 304% YOY growth respectively.

Although the local advertising spending in the first quarter of 2017 was only on par as the previous year, the 6% YOY growth in adspend in Q2 and Q3, and the 5% YOY increase in the last quarter, brought an overall 4% rise in adspend in 2017.

The adspend growth in 2017 was mainly contributed by the 1.5 times growth in mobile adspend, the 10% and 4% YOY increase in TVC and Outdoor ads.

Last year, advertisers also significantly increased their adspend in video ads, taking up a 40% share of the overall adspend in mobile. myTV SUPER, YouTube and Viu were the key platforms.

This year's report emphasises how the research company has expanded its coverage.

"As admanGo expanded its coverage in Google Ad Network(GDN) in 2017, GDN now accounts for 29% of total mobile adspend," the report read. "Although a remarkable 168% overall YOY increase in mobile adspend was recorded, if we exclude the newly covered GDN and other mobile apps in 2017, the actual growth in adspend for mobile ads is 61% compared to 2016." 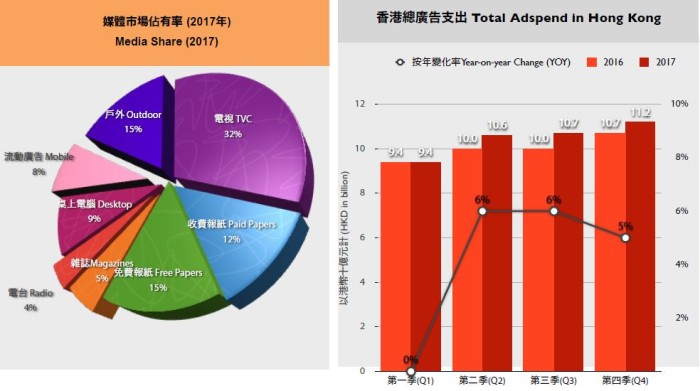