A.S. Watson Group has partnered with Operation Smile, a charitable organisation, to launch a global CSR campaign to help children in need. It will roll out a series of digital, social awareness campaign for cleft conditions in Hong Kong.

This global, long-term partnership will kick off with the “Give a Smile” campaign which targets to fund surgery for around 1,000 children with cleft palate or cleft lip by the end of 2019, giving them new smiles and fresh hope for a brighter future.

Malina Ngai, group chief operating officer of A.S. Watson Group and a Member of the Group’s Global CSR Committee, said: “A.S. Watson Group’s mission is to put a smile on people’s faces, not only our customers but also the people who most need a helping hand.” This vision is shared by Operation Smile.

Founded in 1982, Operation Smile is a charitable medical service organisation, providing corrective surgery to children born with facial disfigurements. According to Operation Smile, every three minutes, a child is born with a cleft lip, cleft palate or other facial deformity in the world. A cleft can create serious emotional and health issues, including difficulty with feeding, problem with speech development, bullying and social isolation. 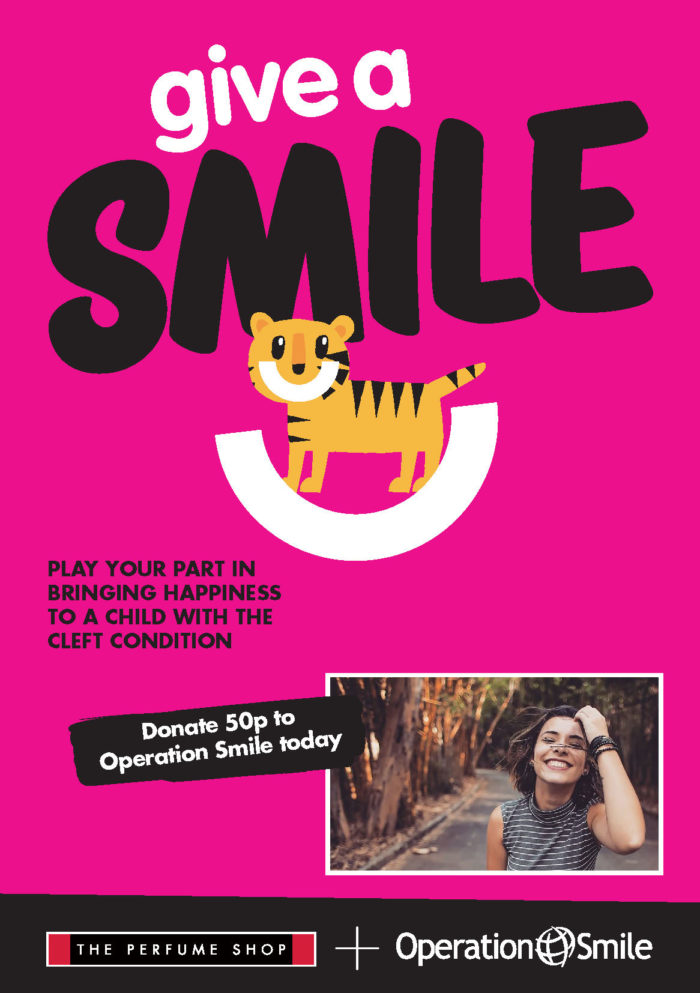 With the aims to raise money for free surgeries to be provided by Operation Smile, and educate the public about cleft issues, “Give a Smile” campaign is tailored to different operating markets, across all online and offline channels.

In Hong Kong, Watsons, PARKnSHOP, FORTRESS, Watson’s Wine and Watsons Water are going to launch a series of creative and interactive campaigns on social media, including a new smile profile picture frame on Facebook, and a Facebook AR game to raise public awareness about cleft conditions.

The group will also launch “AI Smile Meter” – The game allows people to upload their most smiley pictures and have their smiles rated by facial-recognition artificial intelligence (AI) system. Players can then share their images, along with their smile ratings, via social media.

In addition, celebrities are invited to share the stories behind their smiles on social media, and call on their fans to take up the challenge and share their own stories.

“We know that people lead busy lives, so we hope that by using social media channels to promote this campaign, our customers all over the world will spend just a moment of generosity and kindness to ‘Give a Smile’,” said Ngai.

Apart from the digital campaign, A.S. Watson also rolled out several activations, such as the MoneyBack loyalty programme ran “Walk for Charity” campaign, so customers walking 8,000 steps a day can make a donation; PARKnSHOP Hong Kong organised charity sales of coloring books, and loyal customers from PARKnSHOP, FORTRESS and Watsons in Hong Kong can donate via the MoneyBack app and website.

Meanwhile, Watsons China launched a social game in WeChat and partnered with suppliers for donation-with-purchase. And in Taiwan, Watsons is selling collectible celebrity masks to raise money.

There’s a piece of the advertising puzzle that digital planners always need to consider...

The agency now handles advertising for Samsonite’s newly acquired lines, Hartmann and High Sierra, on top of Samsonite and America..

The company has split its Asian business into two units, and appointed MDs for both North Asia and South Asia...

Malaysia salary guide 2019: What you should be asking from your bosses

In the B2C space within KL, marketers with strong profit and loss management skills will be in demand. Job seekers can expect an a..