The holy Islamic month of Ramadan plays a very significant role in the lives of people in Indonesia and across the Southeast Asian region. Increasingly, this is also having an effect on how and when they do their shopping - especially on mobile.

Indonesia, in particular, presents a lucrative opportunity during Ramadan. It’s the largest smartphone market in Southeast Asia, with over 55 million users. A lot of businesses in the country want to make the most of the Ramadan season, particularly those which are mobile-first. 61% of Indonesians own a smartphone, compared to just 17% who access the internet from a desktop device.

Pair this with the fact that Ramadan and the time preceding it is one of the busiest online shopping periods in Indonesia, and you can see why companies jump at the opportunity.

During 2016, our clients saw an increase in purchases of 214% during Ramadan, compared to the month before. But while interest in marketing around Ramadan is very high, many companies are unsure of the best time to invest in the right strategies for mobile marketing during the month-long observance.

Advertisers should start earlier with awareness and burst campaigns, in which their app is pushed to the top of the ranks in the app store. This is to secure access to coveted ad slots because competitors drive up cost-per-install (CPI) rates in the week before Ramadan.

It is also important to note that during Ramadan, our data revealed an average buffer period of 7 to 14 days between the install of an app and subsequent purchases, meaning the two are directly correlated and users take this time to consciously browse within the app before making their purchases.

So, start around three weeks before the beginning of Ramadan to ensure your app climbs the rankings, securing its place as top-of-mind for the consumer, while giving them the time to familiarise themselves with your app’s offering once they’ve installed it. This is an important step in the strategy to get ahead of the competition in advance of the busy pre-Ramadan sales period.

These are the optimal time frames to take advantage of your investment in reaching top rankings in the app charts and the large numbers of users acquired in the weeks prior to Ramadan. Running sustainable, ongoing campaigns, in which users are targeted with specials and discounts, will boost engagement within the app.

Tailor your efforts during Ramadan with customized, relevant promotions such as discounts and cash-back offers targeted during peak purchase periods (the week before Ramadan begins and the week before it ends). It is also important to ensure that campaigns are relevant to users’ Ramadan needs. Using sustainable campaigns to push items which are often bought during the fasting month, such as religious clothing and electronics, is key to ensuring maximum engagement and purchase rates.

“Ramadan is one of the most important times of the year for us”, says Doni Nathaniel Pranama, Internet marketing and analytics lead at Tokopedia. “We make sure to take advantage of this period, when a lot of users are doing their shopping on mobile, but it’s essential to invest at the right time,” he added.

The data reaffirms that you should be prepared

To discover how Indonesian consumers behave around their holy month, we looked back on mobile advertising campaigns we ran during 2016’s Ramadan period, which took place from 6 June to 5 July.

We compiled data, covering the month before and the month of Ramadan itself, from our top mobile-commerce clients, leading players in the Indonesian mobile commerce market, and analysed when they experienced significant peaks in install and in-app purchase rates.

What we found was that, when it came to m-commerce, our clients saw a surge of installs in two particular periods: first, in the three weeks before Ramadan started, and again two weeks before it ended.

When it comes to fluctuations in spending around the holiday, some may be surprised to find out that m-commerce purchase rates do not increase toward the end of Ramadan when many Indonesians receive their Idul Fitri bonus, an annual holiday bonus from all employers, marking the end of the month of fasting.

By this time, it is already too late to logistically meet the quick turnaround between purchase and delivery of items before the big celebration at the end of Ramadan. Rather, our results reveal a sharp rise in purchase rates the week before Ramadan itself as well as during the second week of Ramadan: 50% and 42% higher than the average over the two-month period, respectively. 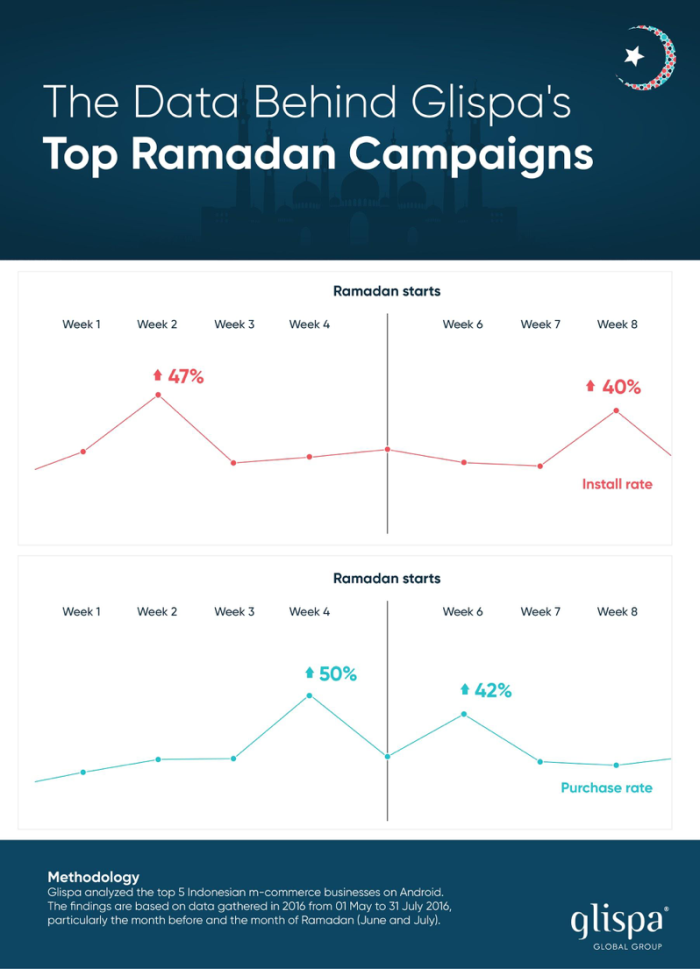 Don’t miss out this year

With Ramadan fast approaching, advertisers in Indonesia should start considering their strategy when it comes to acquiring new users and boosting the purchase rate within their app. The competition rises significantly during this time and coming up with the right app marketing mix can make all the difference to your revenues during this peak time of the year in Indonesia.