As Apple’s iOS 9 update gives users the ability to block ads on mobile websites efficiently, three of out 10 iPhone users are currently turning ad-blocking services on their PCs/laptops, according to a recent report from GlobalWebIndex.

In the digital world, the growing popularity of ad-blocking is the crisis of the moment, as it is threatening the nearly US$60 billion online ad industry, Wall Street Journal reports. 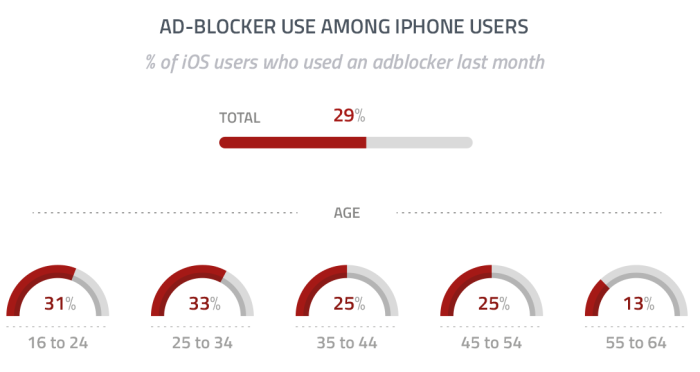 According to GlobalWebIndex’s figures, 29% of iPhone owners already have ad-blockers installed on their PCs. A third of iPhone 6 owners block ads on sites, suggesting they will take the same approach on mobile when they install iOS 9.

What’s more, it’s younger audiences who are in the lead here, suggesting that they will be the most enthusiastic at embracing mobile ad-blockers in order to preserve battery life, reduce data costs and avoid unwelcome interruptions.

It’s unsurprising that people who don’t like ads are using ad-blockers.

Most consumers using ad-blockers are more concerned by how companies are using their data than by general erosion of privacy.

Some 69% of those who had ad-blockers installed said they disliked their personal data being used by firms.

Equally important is that current iPhone 6 users are some of the most likely of all to be using these tools already, with this group being 20% ahead of average.