The study surveyed 165 communications and marketing leaders from 100 organisations within the financial services, technology and professional services sectors across Asia Pacific, Europe, Middle East and Africa, and the US.

More budget is also expected to go into digital marketing - SEO, SEM and email (57%), social media (54%), marketing and communications technology (52%) and digital advertising (48%). On the other hand, 52% of those surveyed stated the budget for corporate communications will remain the same over the next 12 months.

Meanwhile, traditional advertising is predicted to be the biggest loser, with 49% of survey respondents indicating that budgets for this channel will remain the same, and 40% expecting it to decrease. 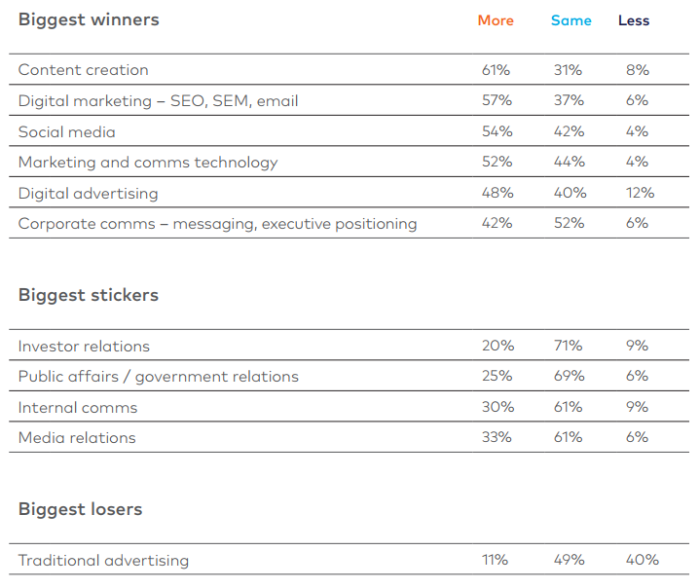 While there is a growing importance of marketing technology within the industry, in-house teams still acknowledged that there is still a considerable skills gap.

Nearly 40% of survey respondents believe their team has limited or extremely limited (39%) expertise in communications and marketing technology.

On the other hand, team expertise was rated highly when it involved traditional areas such as events (91%), corporate communications (89%) and media relations (85%). According to cognito, current survey results show a much broader skillset as compared to its 2016 survey. 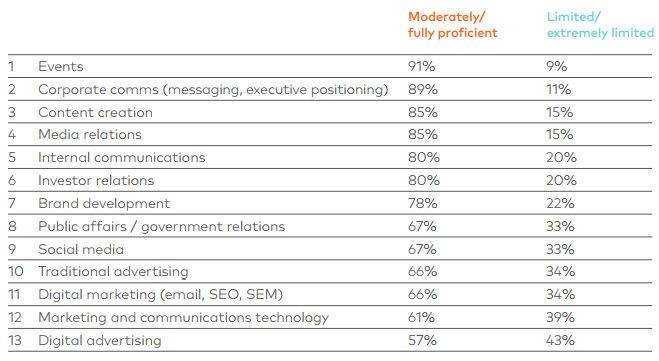 According to Cognito, adapting to technology is a recurring theme throughout the survey, as teams aim to improve understanding from analytics, leverage automation platforms and continue to diversify their mix of channels and activities.

Data analytics (79%), marketing automation (57%) and mobile marketing (54%) are the top three technologies that respondents expect to have a moderate or high impact on communications and marketing in 2018.

According to the survey report, the increasing pressure to justify spend, optimise return on investment and evaluate different channels and content is boosting investment in smart measurement and analysis.Additionally, consumers are constantly expecting an "always-on" personal communication with brands, spurring them to adopt a holistic omnichannel approach with automation, mobile and programmatic.

Despite virtual reality (91%), artificial intelligence (70%) and machine learning (70%) rising in popularity nowadays, respondents expect it to have low or no impact on their team's work next year. However, Cognito noted that the impact of these new technologies on marketing is likely to be less substantial, though less immediate, as they mature.

What are some of your predictions and challenges for 2018? Share them with us!

BLOOM and ELEMENTS team up for seamless lifestyle shopping

After tackling fonts, Microsoft now reported to freshen up under the hood of Windows 10