Founder of Singapore-based private members' club 1880, Marc Nicholson, has apologised for an insensitive and inappropriate question it asked during a recent pub quiz. The question concerned the trial of former American police officer Derek Chauvin and the length of time he had his knee on George Floyd's neck. Chauvin was recently convicted of murder for pushing his knee on Floyd's neck last May following a confrontation. Floyd was accused of using a fake US$20 bill to buy cigarettes at a grocery story. He became unconscious and eventually passed away, sparking global protests. Nicholson told MARKETING-INTERACTIVE that over the past 24 hours, he has listened carefully to those who have expressed anger about the pain 1880 has caused.

"On behalf of all of us at 1880, I apologise from the very bottom of my heart. 1880 is about creating connections and inspiring conversations that help us understand one another better; it’s an inclusive, safe space for our community to discuss important issues and topics, that matter to all of us. We have a responsibility to our entire organisation, and community, both internal and external, to lead with accountability," he added. Nicholson also said that "a terrible thing has happened here" and takes full responsibility for it.

The question was insensitive and inappropriate and goes against the values that inspired us to build 1880 in the first place, and that we strive to live by every day. Many people are hurt. For this, we are truly sorry.

He also explained that 1880's purpose is to create connections to people not to destroy them. "We are devastated to have caused so much pain and discomfort, and we hope for the opportunity to grow and do better. Most of all now we want to create room for healing," he added.

Meanwhile, the club has also apologised on social media, explaining that the very mention of the subject matter was "completely out of line and showed a serious lack of judgement". It also takes full responsibility for the incident.

"We apologise unreservedly to each and every one of you and are very sorry that you had to experience this at all, especially within our community," the club said, adding that the incident is not a reflection of its values. 1880 also said it will learn from this and commit to taking all necessary steps to re-establish consumers' trust in them.

Its Facebook post had 12 comments at the time of writing and most of them were negative. One user commented that this was "very distressing" while another said this was "absolutely shocking".

Meanwhile, its Instagram post had 206 likes at the time of writing. Likewise, most of the comments were negative, with many criticising 1880 for asking the question in a planned pub quiz. Some called the act "disgusting" and "abhorrent" and called for people to boycott the club while others said this was "unforgivable behaviour". Another user also said 1880 was sorry as a result of the backlash. That said, there were a handful of users who accepted 1880's apology and stood up for the club, explaining that everyone makes mistakes and what matters is how one learns from it. 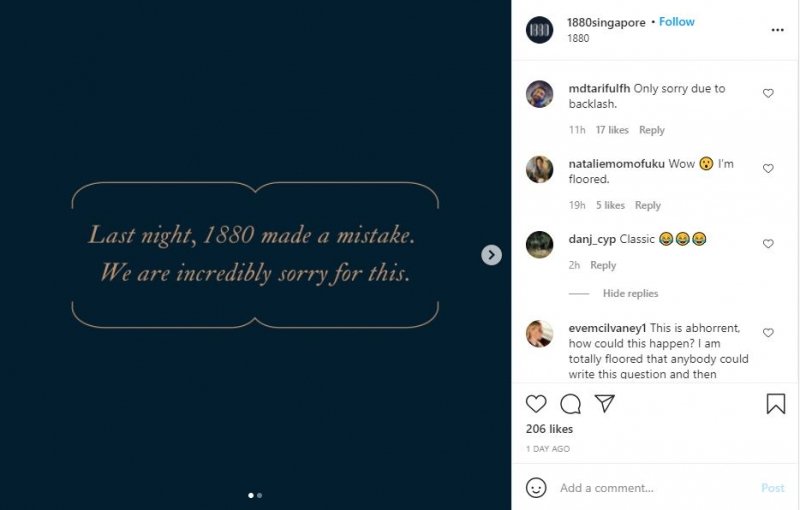 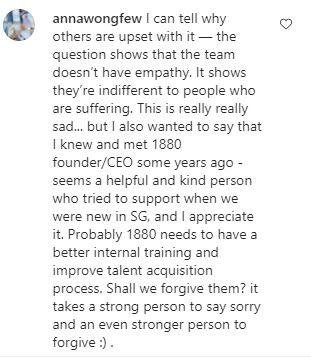 Separately, Nicholson recently told MARKETING-INTERACTIVE in an interview that the club was created not to bring together like-minded people but rather people who would challenge the status quo and style of thinking. According to him, the club focused on physical ways to stay connected during the COVID-19 pandemic, such as writing letters to members, or giving each other a call, and meet-ups instead of turning to digital solutions. Other than using digital platforms such as email, Telegram, and WhatsApp to communicate with its members or potential members, 1880 has always prided itself as an organisation that focuses on person-to-person interaction.