Brand consultancy Interbrand has named Apple, Google and Coca-Cola as the three most valuable brands in its 2016 Best Global Brands report, with automotive and technology brands dominating the ranking and Tesla and Dior entering the top 100 brands.

Coca-Cola, Microsoft, Toyota, IBM, Samsung, Amazon, Mercedes-Benz and GE round out the top 10. Dior and Tesla enter the best global brands report for the first time, at #89 and #100 respectively.

Despite the bad publicity generated by the Note 7 recall, Samsung managed to keep its rank #7 and increase its brand value by 14%, up to US$51,808 million.

Meanwhile, McDonald’s slipped out of the top 10 this year, replaced instead by Mercedes. 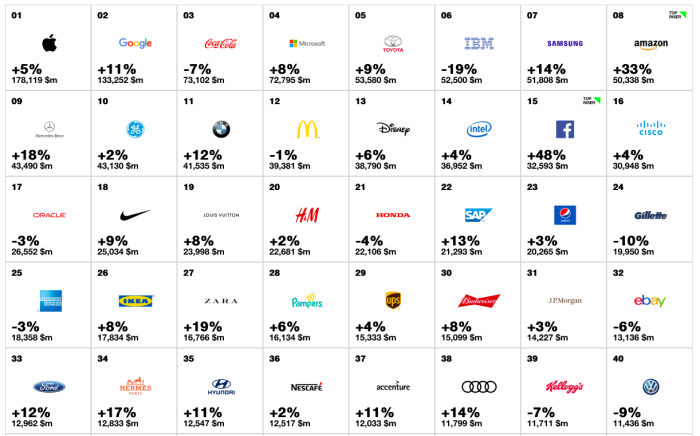 In its 17th year, the annual report is based on three key components that contribute to a brand’s cumulative value:

Nugit receives US$5.2 million in funding

Blue 449, part of the ZenithOptimedia group, has opened its ninth network office with the launch of the agency in Hong Kong. ..

He will work closely with and report directly to CEO Tan Kien Eng...

Announces grant for digital literacy program for one million Filipinos in Visayas and Mindanao...

Not only did Gap misspell "Einstein", it was also slammed for perpetuating gender stereotypes. ..

The brand has appointed The Media Shop across Singapore, Malaysia, Hong Kong and Korea...